Nearly one third of state prison inmates use drugs at the time of their offense, and more than half show signs of drug dependence or abuse. In new research which models substance abuse and crime as people move in and out of the prison system Gary A. Zarkin and Alexander J. Cowell examine the lifetime costs and benefits of diverting non-violent substance abusers from prison to community-based treatment. They find that those who complete community-based treatment commit fewer crimes by the end of the first year of the program, and that as a whole the program could save more than $14 billion for the criminal justice system and have lifetime social benefits of $25 billion.

Substance abuse among offenders continues to concern policy makers in the United States because it is prevalent and affects criminal behavior. An estimated 32 percent of state prison inmates use drugs at the time of the offense for which they are incarcerated, 56 percent use in the month before the offense, and 53 percent show signs of recent drug dependence or abuse. Offenders who regularly use drugs have higher criminal recidivism rates, which results in increased arrest and incarceration rates. Given the obvious burden on the criminal justice system and society caused by substance abuse by offenders, investing in effective and targeted substance abuse treatment may make economic sense. Few offenders have access to substance abuse treatment, however. For example, at most 10 percent of state inmates report receiving any clinically or medically based substance use treatment while incarcerated.

A substantial literature demonstrates that community-based treatment as an alternative to incarceration for non-violent offenders—either by diversion or by a drug court—has positive net benefits to society and the criminal justice system. One limitation of this literature is that it typically focuses on short-term outcomes and a single treatment episode, whereas substance use often recurs over several years. In new research we find that the diversion of non-violent offenders into community based treatment both lowers the cost of prison and drug treatments by tens of billions of dollars, and reduces the number of crimes committed after release.

We built a lifetime simulation model that captures the episodic and recurrent nature of substance abuse and the multiple episodes of drug abuse treatment, crime commission, and re-incarceration in jail or prison. By following individuals over their remaining lifetime, the model more fully accounts for the benefits and costs of substance abuse treatment received in prison and in community-based programs than an approach based on a static model or using data gathered over only a few years of individuals’ lifetimes. We estimate the lifetime benefits and costs of diverting substance abusing offenders from prison to community-based treatment using the model. The analysis focuses on offenders in state prisons because state correctional systems house the majority—about 90 percent—of the prison population.

The simulation model follows a nationally representative cohort of individuals who are at first incarcerated in the state prison system in the United States. The model then tracks individuals’ subsequent substance abuse, criminal activity, employment, and health care utilization as they move in and out of incarceration and drug treatment programs. The main advantages of the model over several alternatives are that it allows for stochastic variation in behavior and outcomes across individuals, is flexible in modeling dynamics, allows individuals’ attributes and history to affect their progression, and can be used to perform analyses at the individual level on cumulative lifetime activities.

In the model, diversion takes place after individuals from the state prison cohort are released, commit new crimes, are re-arrested, and enter the criminal justice system. People who are diverted are non-violent offenders and assumed to enter community-based treatment. To assess the lifetime benefits and costs of diversion, we estimate a baseline model of no diversion and two hypothetical policy scenarios in which 10 percent and 40 percent of those re-arrested and sentenced to state prison are instead diverted into community-based treatment.

The simulation model includes parameters that are obtained from various data sources. The characteristics of the state prison cohort are from data representing the population of U.S. state prisoners in 2004 ages 21 to 60 (1.14 million people). A large proportion of the sample (62 percent) used substances shortly before incarceration.

The results from the simulation clearly demonstrate the net benefits to both the United States as a whole and the national criminal justice system in particular of diversion for non-violent offenders from prison to community-based treatment. Both diversion scenarios yield significant societal incremental net benefits relative to the baseline of no diversion. Expressed in 2015 dollars, the lifetime societal net benefits accruing to the United States from the diversion scenarios are $9.4 billion (when diverting 10 percent of eligible offenders) and $25.0 billion (when diverting 40 percent of eligible offenders). The national criminal justice savings are similarly significant and sizeable, at $5.3 billion and $14.3 billion for the two scenarios. Importantly, the net benefits and cost savings estimates are conservative because the model follows only a single cohort of offenders who were incarcerated in 2004. As additional cohorts are considered in future years, the net benefits would be even larger.

One of the concerns about a diversion program is that non-violent offenders are released to the community where they may commit crimes instead of being incarcerated. Our analysis shows an immediate, short-lived increase in crimes (Fig. 1). But by the end of the first year, fewer crimes are committed (Fig. 2), generating cost savings to the criminal justice system. These cost savings increase rapidly in the first 20 years and then flatten out as offenders age. 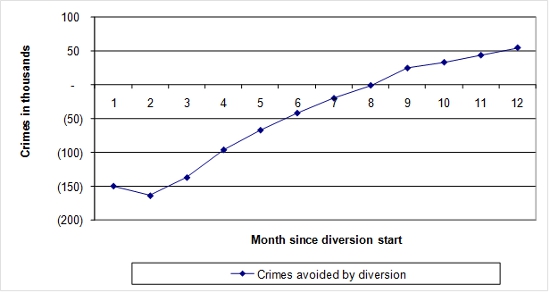 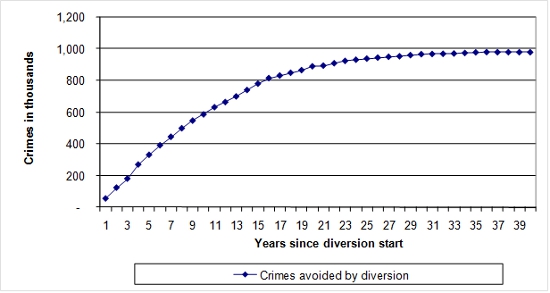 The study also provides insight into how net benefits and criminal justice cost savings may scale with respect to the size of the diversion program. Four times as many eligible offenders are diverted in Scenario 2 (40 percent) than in Scenario 1 (10 percent). Relative to baseline, this four-fold increase in the proportion yields about twice the net social benefit (a $15.5 billion increase in the net benefit from Scenario 1 to Scenario 2) and more than twice the national criminal justice cost savings (a $9.0 billion increase in savings from Scenario 1 to Scenario 2).

Future work that builds on our paper should seek to refine the diversion scenarios and evaluate scenarios that are the most policy-relevant to decision makers. In addition, our model can and should be implemented for specific states. To be the most useful for policy makers, this effort would draw on state-specific information on key data, such as the prevalence of diversion programs, costs, the prison treatment and aftercare system, and criminal behavior.

Acknowledgements: This study was funded by NIDA grant 1-R01-DA021320-01A2. We would like to acknowledge Kimberly Houser for her help gathering the data for this study.

The article is based on the paper, ‘Lifetime Benefits and Costs of Diverting Substance-Abusing Offenders From State Prison’, in Crime & Delinquency, co-authored with Katherine A. Hicks, Michael J. Mills, Steven Belenko, Laura J. Dunlap, and Vincent Keyes.

Alexander Cowell – RTI International
Dr. Alexander Cowell is a senior research economist at RTI International with expertise in the areas of mental health and substance abuse. He has considerable experience leading economic evaluations in the areas of mental illness, substance abuse, and criminal and juvenile justice. He currently plays a leading role in a national evaluation of a program to address screening and brief intervention for substance misuse. His publication record includes journals such as Addiction, Psychiatric Services, Journal of Substance Abuse Treatment, Journal of Studies on Alcohol and Drugs, Health Economics, Medical Care, Journal of Research in Crime and Delinquency, Health Services Research, and The American Journal of Psychiatry.