US firm’s successful expansion into many different countries raises important questions about the regulation of technology-dependent businesses. Some tough decisions will need to be made, says Thomas Hastings.

US technology firm Uber continues to attract controversy, with the firm’s notoriety coming hot on the heels of near-constant technological and territorial expansions.

The concept at the heart of Uber’s model is simple yet highly effective: a smartphone app which pairs users with a cab at the stroke of a few soft key buttons. The success of this model – and the spread of smartphones more generally across the globe – is testified by the firm’s expansion into nearly 60 countries and more than 300 cities worldwide.  Further validation of the Uber model is provided by the growing list of like-minded companies offering similar services (witness the ‘Uberification’ of Lyft, Haxi and Curb).

Investors are also keen: in July earlier this summer Uber achieved a record valuation for a venture-backed firm of around US$51 billion. Given all this undoubted business success – and the seeming rise of customer demand – why, then, does controversy follow Uber?

Despite the convenience offered by the app-based approach to finding and taking a taxi, there remains a long list of negatives associated with Uber’s business model and its associated consequences. Perhaps most obviously, Uber has drawn criticism as another tax-avoiding US firm, part-owned by Goldman Sachs, skimming money from host economies.  Of course, it is easy to agree that not paying tax is wrong, but it’s notoriously harder to challenge, especially as a hard-pressed consumer (Amazon and Starbucks, to name but two apparently tax-avoiding firms, continue to do a roaring trade).

Additionally, there are the equally obvious (through more direct) casualties in the form of cab drivers not operating on behalf of Uber. In the UK this has been epitomised by the problems experienced by London black-cab drivers whose trade is arguably now under threat.  Related economic concerns have also centred on the wages Uber drivers themselves earn, which are reported sometimes to infringe current minimum wage rates depending on the business earned.

There are also further concerns over Uber’s pricing system, which may impact negatively on customers in the event that Uber one day earns monopoly status in the taxi business. Uber typically charges a reasonable average rate, but its prices are based on algorithms that frequently ramp costs up at times of high demand.  This was seen clearly in the UK during the London Underground tube strikes that took place this summer when fees rose by as much as 300 per cent in the gridlocked capital.  Depending on its future success, will Uber retain its focus on cheap transport or seek to maximise profits for its venture-capitalist owners?

These various concerns and a spate of anti-Uber protests, both in the UK (one of the latest took place outside City Hall in London, disrupting Mayor’s Question Time) and across the globe, have raised broader questions as to how technology-dependent businesses such as Uber should be regulated now and in the future. 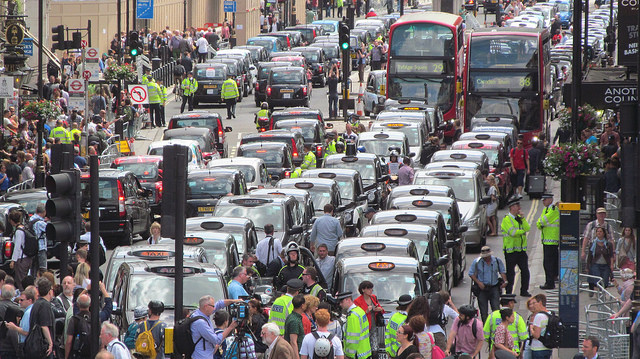 One of the more pertinent questions to have emerged concerns a basic point of clarification: are Uber’s drivers employees or independent contractors? If they are employees, would Uber agree to pay the different social security contributions and benefits required by employment law in different nation-states?  This issue has so far been dodged by the current London Mayor Boris Johnson, who has defended the Uber model as part of a broader ‘light regulation’ approach to big business and a general desire to promote a knowledge- and technology-friendly economy in the nation’s capital (after all, Britain is not France). Whether this stance in the UK remains the same in future depends, in part, on Johnson’s replacement as Mayor after elections on 5 May 2016.  Whether the new office-holder prefers a light or hard approach to regulating firms operating in the capital, this question about employment status is likely to remain key.

The case is well evidenced in the United States, where, despite proactive strategies of labour market regulation driven by Professor David Weil at the US Department of Labor (USDOL), Uber has remained a hugely problematic case. The strategy adopted by Weil and USDOL has been to target powerful operators at the top of corporate supply chains, those which typically operate complex franchising and supply chain models (which Weil terms a form of ‘fissuring’).   Yet, despite taking such a proactive stance to labour-market regulation, USDOL has so far failed to conjure up a unified approach to regulating Uber and related firms that seek to utilise ‘surplus labour and idle assets’ (as noted in The Economist). The grey areas created by these spot markets mean that USDOL, and its equivalents in other countries throughout the world, have often struggled to charge Uber on legal grounds, at least with any confidence.

In the United States, the result of this lacuna has been that taxi drivers themselves have sought legal action against the company. This has included the uptake of the website ‘uberlawsuit.com’, which is currently pursuing clarifications on several of the issues raised above.  While such action taken at an individual level indicates at least the partial failure of state labour-market regulation, it also suggests that further protest stages and more advanced strategies may eventually emerge as well in the UK.

It is probably too late for Boris Johnson to change his approach. But the next Mayor of London unquestionably faces tough decisions over whether and how the Uber business model can be integrated into the UK political economy in ways which benefit workers as well as venture capitalists.

Thanks to Lindsey King for helpful discussions on this subject at the 12th Conference of the European Sociological Association held in Prague in August 2015.

Please Note: A version of this article was originally posted on SPERI Comment, and at the LSE’s British Politics and Policy blog.