The 2014 Farm Bill reaffirmed protection for farmers against low prices, but limits US leadership in trade reform.

The 2014 Farm Bill reaffirmed protection for farmers against low prices, but limits US leadership in trade reform.

Ahead of the World Trade Organization’s Ministerial Conference in December, David Orden and Carl Zulauf give an overview of the aims and guarantees of 2014’s Farm Bill. They write that while the Bill eliminates fixed payments, it continues past countercyclical programs in the form of protections against low prices or revenues. They write that while the Farm Bill will help preserve farming incomes, it does little to move the US in the WTO’s desired direction of reining in farm support.

After three years of often tumultuous negotiations, the US Congress passed a new Farm Bill in February 2014 and President Obama signed it into law. The Agricultural Act of 2014 reaffirms the government’s longstanding countercyclical support to farmers through 2018.

The Farm Bill includes several new programs sought by farmers. The resulting support matrix is complex but can be boiled down to a few basic points. Annual fixed direct payments (payments decoupled from prices and production) of about $4.5 billion were eliminated. In place of these fixed payments (made for the previous 18 years) greater protection is provided against low prices or declining revenue. This is a trade-off that farm groups endorsed in response to criticism of large fixed payments in years of high farm income, as was the case from 2006 through 2013. The new programs offer support that is less certain from year to year, but provides more downside risk protection. For crop year 2014, and likely 2015, the new programs will cost somewhat more than the eliminated fixed payments. After that, costs may decline, but anything can happen—from substantially lower to much higher support costs depending on how market prices and farm revenue turn out.

The Farm Bill continues two traditional price countercyclical programs. Its Marketing Loan program makes a compensating payment for eligible program crops if market price falls below what are called “loan rates.” Its Price Loss Coverage (PLC) program makes a payment when market price falls below a higher fixed “reference price.” The key difference between the two programs is that farmers receive a marketing loan payment on a farm’s current output of a program crop while farmers receive PLC payments on a historical base of production, even if they are not producing that crop. The loan rates are thus a direct stimulus to production if prices are low, whereas the PLC payments are essentially price-contingent income support. The 2014 Farm Bill kept loan rates relatively low (see Figure 1) but raised reference prices by 30 to 50 per cent, increasing the probability of payments. For crop year 2014, marketing loan payments for cotton will be around $175 million and rice and peanuts will receive $680 million through the PLC program. 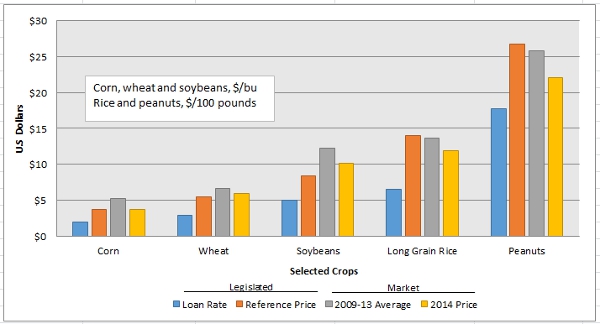 An alternative to PLC that farmers were able to choose is the Agricultural Risk Coverage (ARC) program. Under this option, there is a cushioning guarantee against declining revenue per base acre, not a fixed reference price guarantee. Farmers who chose ARC are committed to it through 2018. With recent high prices, the revenue guarantee works out to a higher implied price guarantee for 2014 and likely 2015 for corn, soybeans and wheat. As shown in Figure 1, these crops would not receive PLC payments for 2014 because their market prices are above the reference prices. But farmers who chose ARC (almost all of corn and soybeans and 60 percent of wheat) will receive nearly $4.0 billion for crop year 2014 (mainly on corn base acreage). The ARC guarantees adjust according to a moving-average of revenue over five previous years. Thus, if prices stay low for multiple years, the revenue guarantee declines. Payments are capped each year at 10 percent of the revenue benchmark.

The 2014 Farm Bill also continues and reinforces additional support farmers receive through subsidized crop insurance. Insurance costs have increased due both to policy decisions that raised coverage and subsidy levels, and due to the higher nominal prices since 2008. As a result, insurance premium subsidies came to exceed the annual fixed direct payments.

Insurance programs are extended in two additional ways in the Farm Bill: through cotton receiving a new, highly-subsidized county-level insurance program but not being eligible for PLC or ARC, and through a Margin Protection Program for Dairy Producers replacing the traditional dairy price and income support programs. The shift to insurance for cotton brought to an end a longstanding World Trade Organization (WTO) dispute settlement case by Brazil against past US cotton support programs. The protectionist US sugar program, in contrast, is unchanged.

US farm policy has generally evolved far from the market-intervention support prices, marketing quotas and annual supply-control land idling of the 1930s Great Depression-era “permanent law” that each new farm bill temporarily replaces. Nevertheless, the 2014 Farm Bill demonstrates the continued political strength of the farm lobby. US farm programs have historically been, and continue to be, countercyclical in character, providing the most support in times of falling or low prices and now revenue. In the divided 2013-2014 Congress that enacted little major legislation, the farm lobby prevailed with bipartisan majorities voting for the Farm Bill in the Republican-controlled House of Representatives and the Democratic-controlled Senate. A logrolling coalition was assembled as always to achieve these majorities. The Farm Bill has 10 titles other than commodity programs and crop insurance and three-fourths of its projected $100 billion annual cost goes to food assistance programs for low-income households, not support to farmers. The permanent law is retained, setting the stage for another farm bill to supplant it before the end of the decade. The next debate will start with the stronger protection against downside risks enshrined in the 2014 Farm Bill.

From an international perspective, the cotton program would not have been changed so differently from other crops without the WTO dispute case. But little else in the 2014 Farm Bill moves policy in the direction of WTO disciplines on trade- or production-distorting support. US farm support regresses in WTO terms from exempted fixed direct payments (this decoupled form of payments remains at the center of EU farm policy) toward payments subject to constraints. It is unlikely that the existing US cap under the WTO of $19.1 billion on certain distorting support will be exceeded. But the 2014 Farm Bill prevents the US from taking leadership to negotiate tighter constraints internationally at the December 15-18, 2015 WTO Ministerial meeting in Nairobi (where instead the US, EU and Japan are calling for the Doha Round to be declared officially terminated) or beyond Nairobi. After the severe global recession and slow recovery of recent years, and with the long commodity boom since 2008 waning, there is little political appetite for reining in farm support in the United States or, for that matter, elsewhere.

This article is based on the paper ‘Political Economy of the 2014 Farm Bill’ (open access) in the American Journal of Agricultural Economics.

Carl Zulauf – Ohio State University
Carl Zulauf is professor emeritus of Agricultural, Environmental, and Development Economics at Ohio State University. He is an award winning teaching at the university and national levels. He wrote an early article that laid out many of the foundation principles that underlie the Agriculture Risk Coverage program in the 2014 Farm Bill.