Constituent pressure may be more effective than lobbying in determining whether a bill passes or fails.

Constituent pressure may be more effective than lobbying in determining whether a bill passes or fails.

What has a greater effect on legislative outcomes, campaign donations and lobbying efforts (the inside game) or constituent activism (the outside game)? In new research, Jeff Smith – who once served in the Missouri Senate, representing 175,000 St. Louisans – analyzes the impact of each method. He finds that contributions had no statistically significant impact on policy outcomes; other than nourishing a class of political fixers, corporate political spending accomplished little. However, constituent contacts seem to have had a substantial impact.

Though evidence for the influence of donations and lobbying on legislative behavior is mixed, a substantial body of research – and conventional wisdom – indicates that well-funded interest groups gain informational advantages over competitors and inﬂuence over legislation. Research has linked donations and lobbying expenditures to individual legislators’ behavior and overall legislative success. If money doesn’t help produce favorable outcomes, observers ask, why would they spend so much?

The principal-agent problem describes difficulties arising amidst incomplete and asymmetric information when a principal hires an agent to pursue the principal’s interests, namely, the agent’s potential to “shirk”. In the case of firm as principal and lobbyist as agent, rational actions by lobbyists and legislators may leave the firm ill-informed and unsuccessful, for several reasons.

First, most day-to-day lobbying is done not by in-house government affairs professionals but contract lobbyists. Lobbyists are often several steps removed from the locus of corporate decision-making, since strategy flows from top executives through a firm’s in-house government affairs department before reaching a contract lobbyist. Thus, a firm’s strategy may change from its original formulation to a legislator’s ears. Also, because most lobbyists who deal directly with legislators are contract lobbyists, a firm cannot perfectly monitor back-channel communications to legislators or legislative staff. Third, lobbyists are independent actors with their own goals which may not coincide with those of the firm. A firm does not know what conflicting personal policy goals he may have, who his other clients are or whether they constitute potential conflicts of interest, or whether the lobbyist will expend his political capital on its behalf or save it for other (higher-paying) clients. And since in most states it is illegal to make lobbyist pay or bonuses contingent upon outcomes, a lobbyist’s incentives are not typically aligned with his client’s.

Fourth, a firm does not know the exact nature of a lobbyist’s relationship with key legislators. And finally, the firm is unaware of the nature of a lobbyist’s relationships with other lobbyists. Lobbyists value positive relations with other lobbyists to facilitate their ability to cut deals and refer or receive prospective clients; this can interfere with a lobbyist’s ability to provide optimal representation. Also, lobbyists who appear to be tussling may actually be colluding to keep an issue from being resolved – a delay likely to require their services on retainer for another year. Some lobbyists have even been known to encourage legislators to file legislation adverse to their clients annually, ensuring the lobbyist’s continued services.

All of the above may limit firms’ ability to translate dollars into policy outcomes. But what else could be driving the legislative process? A simple answer is constituent pressure.

Citizen-activists may influence legislative outcomes via the deterrent effect of mobilized opinion on elected representatives. Legislators understand that intensity of opinion explains the difference between those who proactively contact their office versus those who merely respond to polls; that explains, for instance, why National Rifle Association-favored positions that attract less than 20 percent public support typically carry the day in legislatures. Accordingly, I hypothesized that direct constituent pressure plays a larger role in legislative outcomes than professional lobbying or campaign donations, and tested this using a dataset of constituent correspondence from six Missouri legislators, an improvement over previous research relying on self-reported interest group data.

If civic passion could surmount moneyed influence, Missouri would be an unlikely place for it, given its unlimited campaign contributions and lobbyist gifts, and its eight-year term limits. [Given research about lobbyist power in term-limited legislatures, one might expect Missouri lobbyists to have outsize impact.] As a “least likely” case, Missouri offers unique analytic leverage.

Since the quality of lobbying contacts trumps the quantity, rendering good data very difficult to gather, I focus on donations instead of lobbying itself as a measure of moneyed influence. After controlling for the party and leadership position of bill sponsors, I examine whether interest group donations influenced or constituent contacts influenced bill passage.

My analysis finds that the amount of money contributed by groups both +supporting and opposing a bill had no effect on its prospects. Constituent contacts in support of a bill increased its odds of passage and those in opposition decrease the odds. Bills sponsored by Republicans were more likely to pass than bipartisan or Democratic bills, and bills sponsored by members of leadership were more likely to pass. Neither the amount of money contributed by groups supporting or opposing legislation had any bearing on the bill’s likelihood of passage, but constituent contacts did.

Figure 1 – Constituent Support of Legislation and probability of bill passage 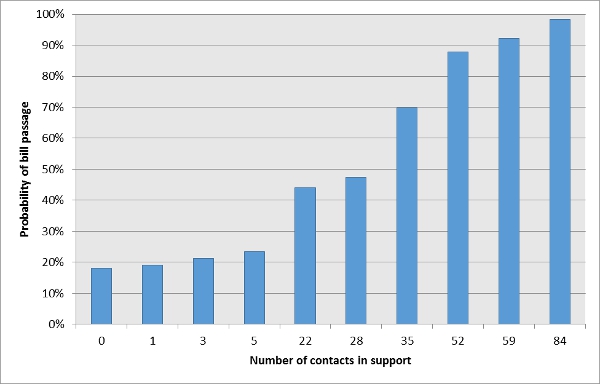 Figure 2 – Constituent opposition to Legislation and probability of bill passage 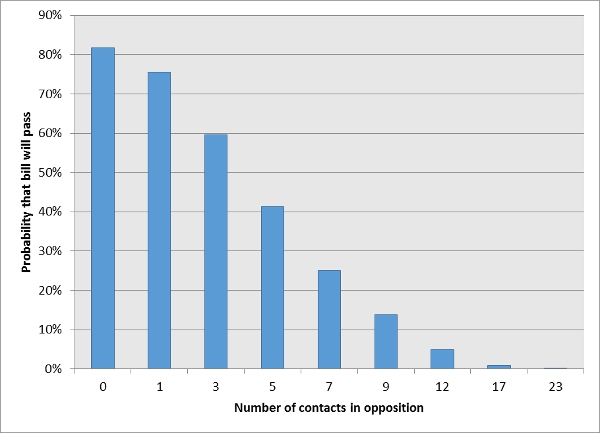 These data infer that constituent contacts, not money, impact policy outcomes. Why?

The link between constituents and re-election was more direct than that between contributions & re-election.  Money may not lead to votes, but constituents who contact legislators often base their vote on the issue that motivated their contact. As ex-Rep. Barney Frank noted, “Contributions are fungible; you can get new ones. You can’t get new voters.”

Technology has increased both constituents’ voice and legislators’ ability to listen – in real time – increasing responsiveness to constituent opinion. The Internet has helped constituent activists become informed in ways that, decades ago, only insiders could. And while politicians have always solicited constituent feedback, it has never been this easy, fast, or cheap. Politicians understand that the responsiveness of their email lists correspond to their value; the ability to mobilize their supporters or quickly raise money increases their clout. This has increased the immediacy and volume of constituent contact with legislators (Once, after spending 20 minutes of floor debate responding to a Senator who was filibustering a bill on midwifery, I had nearly 100 angry constituent emails upon returning to my office).

Informational asymmetries allow lobbyists to “shirk,” decreasing the likelihood of favorable policy outcomes for clients. Various forces may operate here. First, lobbyists rely on renewals each session. If they achieve a favorable outcome or a reasonable compromise, the pressing issue disappears, decreasing the likelihood of contract renewal. Second, legislators realize that firms are more likely to make donations before legislative action than afterwards. Lobbyists and legislators share an incentive to feign serious effort, but not necessarily pass a bill. There are enough steps in the legislative process that lobbyists can easily show progress for several years (of retainers) without changing the law. Does this mean there is an active conspiracy? Not necessarily. As 19th century Massachusetts Senator Martin Lomasney advised, “Never write if you can speak; never speak if you can nod; never nod if you can wink.” Firms could minimize this if outcome-based incentives aligned lobbyists’ interests with their own, but most states criminalize this.

Small, passionate groups who can produce unified constituent activity may thus be better positioned than large corporate actors. During my tenure in the Missouri state senate, three such groups stood out: lay midwives, noodlers (hand-fishers), and Freedom of the Road Riders (motorcyclists without helmets). None spent money on politics. All fought powerful interests: such as the Humane Society, big hospitals, and the public health lobby. Each succeeded by producing hundreds of personal contacts to each legislator.

Though campaign finance reformers may dispute these findings, they should embrace the evidence that mobilized activists can affect policy without spending money. And perhaps they should focus more on leveraging technology to help grassroots activists overcome the power of big money – just as Missouri’s midwives, noodlers, and helmetless motorcyclists have.

This article is based on the paper, ‘Passion or Dollars? How Mobilization Can Spoil the Mother’s Milk of Politics’, in Political Research Quarterly.

Jeff Smith – The New School
Jeff Smith is Assistant Professor of Politics and Advocacy at Milano. Jeff, who has also taught at Washington University and Dartmouth College, teaches and researches political campaigns, urban political economy, policy advocacy, and the legislative process. Jeff served in the Missouri Senate from 2006-2009, representing St. Louis City. His new book is Mr. Smith Goes to Prison: What My Year Behind Bars Taught Me About America’s Prison Crisis. (St. Martin’s, September 2015).