After decades of growth, prison populations are dropping in several US states. In California, which houses the US’s largest prison system, recent declines are driven by a landmark policy change—Public Safety Realignment—that decentralized correctional authority and management from the state to the counties. New research from Mia Bird and Ryken Grattet finds evidence that offenders released to counties that prioritized reentry services under realignment had better recidivism outcomes than those released to counties that focused on traditional incarceration approaches.

On October 1, 2011, the state of California and its 58 county governments began implementing a fundamental realignment of responsibilities for corrections and rehabilitation. A response to three decades of soaring prison populations, these changes were proposed by Governor Jerry Brown and enacted into law by the legislature as AB 109 (Public Safety Realignment). The reform was motivated by federal court rulings linking overcrowding to the inability of the state to provide a constitutional level of health care in California prisons, a budget crisis, and a discernible nationwide mood shift on incarceration, amid reevaluations of its effectiveness. Hailed as “revolutionary and sudden” and “the most significant correctional reform in decades”, realignment offers a compelling policy experiment by virtue of a key feature of its design, namely it allowed counties complete discretion to determine how they would implement program and service interventions and new sanctioning practices for offenders.

In new research, we exploited the variation across counties in approaches to implementing realignment to explore broader questions about how policy changes like realignment can affect recidivism. Recidivism, defined as a return to offending after having been punished, can be measured in many ways. Our study focused on rearrest and reconviction of a particular subset of the realigned offender population—the “post-release community supervision” or PRCS segment. These are offenders who were released from prison after having served sentences for non-violent offenses and who previously were released to the state parole system. Under realignment, they are now supervised by county probation departments. We find PRCS released to counties that prioritized reentry programs and services had lower recidivism rates than their counterparts released to counties that prioritized traditional enforcement.

To take on these offenders, the state gave each county a share of 2.3 billion dollars of funding in the first three years. The only strings attached to these funds were that counties report back to the state how they planned to spend the money. Counties fell into two different camps. Some counties reported to the state that they planned to give the lion’s share of funding to the county Sheriff and to the jail system while others allotted more money to reentry programs and services. We investigated whether PRCS offenders released to counties that adopted “enforcement-focused” plans performed better, worse, or no different relative to offenders released to counties with “reentry-focused” plans. Our analyses had to confront the possibility that any apparent differences in recidivism patterns between offenders released to these groups of counties might, in fact, be attributable to preexisting trends in recidivism or compositional differences across these groups of offenders. We controlled for key compositional differences and performed a number of other sensitivity analyses to explore the possibility that what we observed might be the result of pre-existing trends in recidivism.

In the end, we found that recidivism increased more for PRCS offenders released to counties that prioritized enforcement relative to those released to counties that prioritized reentry services. Specifically, as Figure 1 shows, the change in the felony rearrest rate under realignment was 4.7 percentage points greater for offenders released to enforcement-focused counties than for those released to reentry-focused counties. When we included all arrests—including felonies, misdemeanors, and supervision violations—our estimate of the differential fell to 2.4 percentage points, but remained significant. Reconviction rates followed a similar pattern. The change in the felony reconviction rate was 1.4 percentage points greater for those offenders released to enforcement-focused counties over the period of realignment. Our estimate did not change when we broadened this measure to include all convictions. 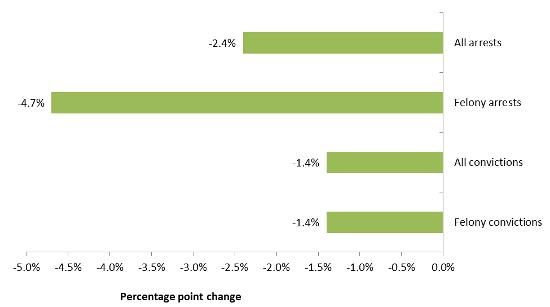 It is important to note, however, these effects may be driven by changes in behavior among released offenders, changes in the response to that behavior on the part of local justice systems, or both. For example, counties that prioritize enforcement may simply heavily monitor offenders and detect more misbehavior than counties that allocated less funding toward enforcement. We addressed this concern by looking at how changes in crime rates varied across county, and we found no significant difference in how crime rates changed across these two county groups. However, as recidivism researchers have long acknowledged, disentangling offender behavior from system response is an enduring puzzle, one that existing empirical strategies are ill-equipped to solve. The implication is that researchers and policy-makers need to consider multiple measures of recidivism and recognize that the relationship between offender behavior and those measures is often mitigated by local justice system practices.

Taken together, our findings suggest that county policies matter under realignment. Offenders released to counties that prioritized reentry programs and services had better outcomes relative to those released to counties that prioritized enforcement. In the context of the strong intent expressed in realignment legislation to increase the use of evidence-based interventions to reduce correctional costs and improve outcomes, this preliminary evidence suggests that those counties that matched their strategies to that legislative intent saw relative reductions in recidivism. These findings lend support toward the conclusion that counties frustrated with high rates of recidivism should consider a reallocation of resources toward reentry programs and services.

The article is based on the paper, “Policy Change and Recidivism: The Effects of California’s Realignment and Local Implementation Strategies on Rearrest and Reconviction”, in Criminal Justice Policy Review.

Ryken Grattet—PPIC and UC Davis
Ryken Grattet is a research fellow at the Public Policy Institute of California and a Professor of Sociology at the University of California, Davis. He previously served as Assistant Secretary of Research in the California Department of Corrections and Rehabilitation. His current work focuses on California correctional policy at the state and local levels. He is the author of Making Hate a Crime: From Social Movement to Law Enforcement (with Valerie Jenness, Russell Sage Foundation Press, 2001 [Paperback 2004]), Parole Violations and Revocations in California (with Joan Petersilia and Jeffrey Lin, National Institute of Justice, 2008), and numerous articles in professional and policy publications.

Mia Bird—PPIC and UC Berkeley
Mia Bird is a research fellow at the Public Policy Institute of California and lecturer in the Goldman School of Public Policy at the University of California, Berkeley. Her work focuses on applying research to criminal justice and health and human services policy-making. Her current projects examine the effects of major policy changes—including California’s Public Safety Realignment and the implementation of the Affordable Care Act—on county priorities, local intervention strategies and individual criminal justice outcomes. Her past work has addressed the allocation of realignment funding to counties, the role counties play in connecting individuals to health insurance, and the ability to improve governance through the effective use of data. She holds her PhD in public policy, MA in demography, and MPP from the University of California, Berkeley.