The global economic crisis and the Great Recession that accompanied it had huge effects at both the national and the local level. In new research, using United Way as a case study, Laurie E. Paarlberg, looks at the effects of changing local economic structures on community philanthropy. She finds that giving to community organizations stagnated or fell between 2000 and 2010, a trend that can be partially ascribed to increases in the numbers of retail employees, who are often less well paid. The outsourcing of business ownership, on the other hand, is associated with greater philanthropy, though at the expense of local social capital.

Global economic forces press community leaders to look to nonprofits to assume greater responsibilities for local service delivery. However, global economic re-structuring may exacerbate philanthropic inequalities across communities and diminish communities’ capacity to come together and raise private resources to address local needs. In recent research, Takayuki Yoshioka of Meiji University and I explored the degree to which economic structure affects community philanthropy, especially giving to local United Way (UW) affiliates, which are the single largest source of funding for health and human services in many local communities in the US. We find evidence that various dimensions of economic structure directly effects giving to local UW affiliates, and indirectly effects giving by influencing levels of socio-economic development, social capital and local government revenue.

Figure 1 shows that, after adjusting for inflation, per capita giving to local UW affiliates has declined between 1990 and 2010. At best, not accounting for inflation, giving to local UWs has remained stagnant. To explain this trend, we hypothesized that changes in the local economy would affect community philanthropy. Community philanthropic organizations, such as local UWs, which raise and distribute resources in geographic region, are heavily dependent upon local stocks of financial and social resources.  In turn, local economic structure shapes the stock of community resources necessary to support local philanthropy. 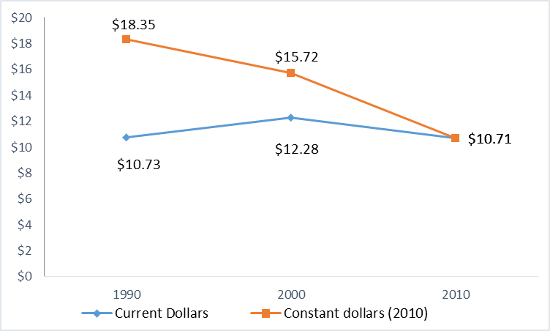 In particular, we are interested in two features of economic structure: the outsourcing of business ownership – transferring firm ownership from locally based owners to distant owners – and the growing numbers of retail employees. Non-local corporations may pay higher wages that increase worker’s ability to donate to local causes, but such large corporations may be less committed to local issues and provide fewer incentives for employees, particularly higher-level managers, to take part in community affairs. Unlike small, locally owned businesses that depend on interactions between business owners and customers, large corporations may retreat from leadership roles in community affairs. The transition to a service economy, with increasing employment concentrated in the retail sector, may also dampen community philanthropy. Retail businesses may have strong incentives themselves to be supporters of community philanthropy—generosity is good for public relations—however, retail employment often pays less, is part-time and less stable, reducing employees’ capacity to donate to local issues.

As expected, we find strong relationships between the stock of local resources and giving to local United Way affiliates. Socio-economic development, social capital, and local government revenues are positively related to local UW fundraising campaigns. Most notably, we find complementary relationships between local government and local giving. Each dollar increase in per capita government revenue is associated with $3.22 increase in giving to the local UW in 2010.

Using structural equation models, we find strong evidence that economic structure affects giving to local UWs both directly and indirectly. Contrary to our expectations, nonlocal ownership has a positive effect on UW campaigns. In 2010, each percentage increase in employment in nonlocal firms increased UW campaigns by $3.80, on average.  Employment in nonlocal firms directly increased giving to local UWs. As expected, nonlocal employment also increased socio-economic development. However, nonlocal ownership is also associated with decreased levels of social capital within communities and decreased government revenue. Ultimately, although nonlocal firms may have increased capacity to support local philanthropy and are associated with increased levels of socio-economic development, nonlocal ownership dampens the commitment to collective community needs (as evidenced by the decreased social capital and local government). Figure 2 shows that over time, the estimated positive effects of each percentage increase in employment in nonlocal firms on giving to local UWs declined from a high of $8.07 in 1900 to $3.80 in 2010. 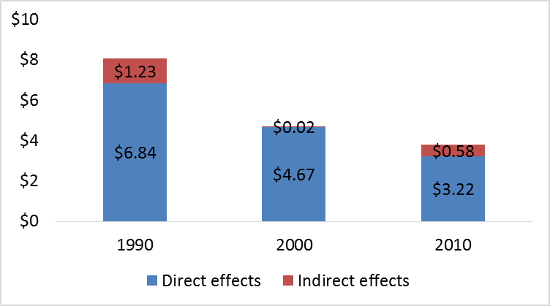 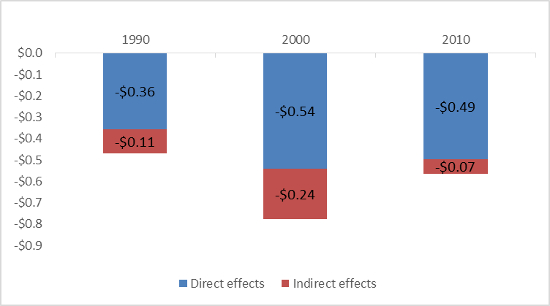 Ultimately, economic development may involve complex tradeoffs between financial resources and social capital. Even prescriptions for economic development, which bring about higher wages and a skilled workforce, may challenge community philanthropy, if accompanied by a decreased commitment to collective community needs. As we increasingly look to community philanthropy as a partner in public service delivery, we must also pay attention to both the social and economic consequences of economic development. Often the global economic forces that press community leaders to look to nonprofits to assume greater responsibilities for local service delivery may also limit the capacity of organizations to respond to local needs, creating a paradox of expectations in a global economy seeking local solutions.

This article is based on the paper, ‘The Impact of Local Economic Structure on Community  Philanthropy’, in Public Administration Review.

Laurie E. Paarlberg – Texas A&M University
Laurie E. Paarlberg is an Associate Professor at the Bush School of Government & Public Service at Texas A&M University. Her publications include numerous articles on topics ranging from geographic mobility and philanthropic engagement to exploring change, transformational leadership, and complexity science as an alternative framework for understanding strategic management in a public serving organization.