While the majority of the public typically supports environmental policies, if the costs fall on local groups with projects in their backyards, they often resist. In new research that uses Ontario, Canada as a case study, Leah C. Stokes examines how small groups are able to mobilize politically to oppose the location of new wind turbines. She finds that the provincial governing party responsible for introducing wind energy policy lost between 4 and 10 percent of their vote share in areas where turbines were located. She argues that policymakers need to engage citizens more during renewable energy project development to build their support and to minimize potential political barriers.

In many policy areas, the public holds a shared view. For instance, we would all like cleaner air and a stronger economy. But for some policies, not all groups in society agree. Sometimes, local costs are imposed disproportionately on some groups, while the entire country and planet benefits. Controversies have arisen when local communities are asked to host airports, housing projects, roads, subways, hospitals, jails, and waste facilities. While we might all benefit from these projects, local groups often resist putting them in their backyard.

This dynamic also occurs with climate policy. Across the globe, the majority of people strongly support climate policy, with policy solutions including installing wind and solar projects, or creating a fee for carbon pollution. However, some groups in society will disproportionately bear the costs of these changes. Specific communities have industries that rely heavily on carbon pollution, and they will face significant costs in the transition away from fossil fuels. Other communities will have wind energy projects installed in their backyards, creating sound and visual changes to the landscape.

If these small groups in society are able to mobilize politically, they may be able to block the will of the majority. This dynamic is amplified if opponent groups are spatially concentrated—if opponents live and vote together. In the case of climate policy, groups have mobilized to block wind energy projects across North American and Europe, often succeeding. But is this mobilization politically consequential? Does the protest spill over from the local level to impact state or national elections?

To answer this question, I studied a specific policy that created a ‘natural experiment’ by sorting communities’ receipt of wind projects as a function of local wind speed. The case is Ontario, Canada, which established an ambitious climate and clean energy policy at the provincial-level in 2009. Crucially, the law did not allow communities to reject wind projects. If selection bias did not occur then places with and without turbines should be comparable. It’s important to realize that this is very unlikely to be the case in most industrial projects, where communities are often targeted because they are poorer, have more minorities or lower chances of mobilizing politically.

Using this natural experiment, I investigated whether citizens living near wind energy projects punished the government more than we would otherwise expect. Looking at the electoral results from the same political jurisdictions over time, I used a variety of statistical estimators. As Figure 1 shows, the governing party responsible for the policy lost between 4 to 10 percent of their vote share in places with wind turbines. When the turbines were already built the losses were larger than if the turbines were only proposed. Even people living up to 3 km or 2 miles away from these wind projects punished the government more than we would expect. Since these places with wind projects did not see as large increases in voter turnout, it’s likely that regular voters changed their vote to punish the governing party.

We often think that voters are not able to follow public policy, particularly in a complex area like energy policy. However, my research shows that voters only punished the provincial government responsible for the climate policy, not the federal government. Together, these findings provide evidence that voters can be informed about public policy, at least insofar as it impacts their ‘backyard.’

Despite majority support for policy to thwart climate change, implementing this policy is often difficult. As my study shows, when opponents are concentrated in communities, they can use this spatial concentration to amplify their voice. If governments then respond to this minority view, this dynamic can reduce democratic accountability and exacerbate political barriers to addressing climate change.

Similarly to locating other kinds of controversial facilities, policymakers may need to engage citizens more during wind energy project development, to build trust, address concerns about fairness, and if necessary, require revenue sharing with the community to build support. Experimenting with policy designs that lead to greater political acceptance of renewable energy will be crucial to minimizing political barriers to effectively addressing climate change.

This article is based on the paper, “Electoral Backlash against Climate Policy: A Natural Experiment on Retrospective Voting and Local Resistance to Public Policy”, in The American Journal of Political Science. 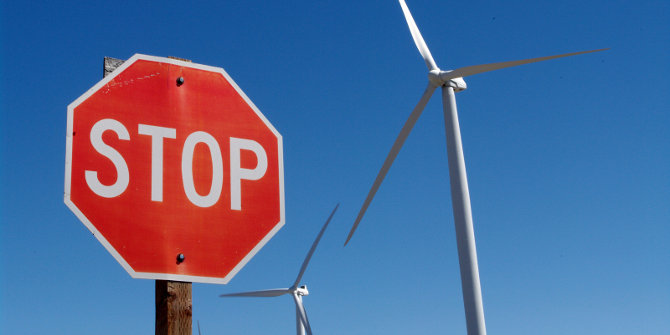