How partisan gridlock in state legislatures encourages the use of citizen initiatives.

How partisan gridlock in state legislatures encourages the use of citizen initiatives.

While partisan gridlock has become a common occurrence in the US Congress, this is also often the case in many state legislatures. In new research, Frederick J. Boehmke, Tracy L. Osborn, and Emily U. Schilling look at one consequence of legislative rules that encourage legislative paralysis – the increasing use of ballot initiatives by citizens. Using data from the American states, they find that as ‘pivotal legislators’ – gatekeepers whose support is needed to overcome a legislative filibuster or gubernatorial veto – become ideologically farther away from the state’s median voter, initiative use increases due to those lawmakers thwarting legislative action to secure preferred outcomes in the form of ballot measures.

We show that more burdensome hurdles for legislative action in the American states lead citizens to sponsor more ballot measures in order to alter policy outside the legislative arena. These burdensome rules include most notably the filibuster, the gubernatorial veto, and the possibility of a legislative override of a veto. While largely unexamined in the US states, passing legislation in the modern US Senate effectively requires sixty votes to overcome a potential filibuster before deliberations on a bill can even begin.

When supermajoritarian rules such as the filibuster and veto override combine, it creates what scholars refer to as the gridlock region. This area in the potential policy space involves policies for which legislators cannot agree on policy alternatives that would garner sufficient support to fend off a filibuster or overcome a possible veto. This leads to legislative inaction, or gridlock, for a large set of policies. Put differently, a majority of legislators would like to pass a new policy, but cannot secure the support of enough colleagues to clear these supermajoritarian procedures and survive the legislative process.

The initiative process offers a way around this gridlock. At present, twenty-four American states (as well as subnational units in other countries such as Switzerland) allow citizens to propose new legislation for an up or down vote at a statewide election. Since the initiative process requires little or no legislative action, it offers a way to overcome legislative gridlock by simply bypassing the legislature. There are hurdles to qualifying and passing a ballot measure, including gathering thousands and occasionally millions of signatures, campaigning, legal battles, and successful implementation; however, these hurdles are distinct from the hurdles to legislating. In part because of these challenges the initiatives occur somewhat sparingly in all except a few states, such as California, Oregon, and Arizona. Even in high initiative use states only a couple of measures pass per year.

If they can clear these qualification hurdles, can citizens use the initiative process to overcome legislative gridlock? We develop a mathematical model that fuses theories of legislative gridlock resulting from supermajoritarian rules with theories of legislating in the shadow of the direct initiative process. The model indicates the conditions under which: 1) the legislature is able to pass new policies on its own or fails to do so, and 2) whether the initiative process then steps in to fill the void. The model envisions the realm of potential public policies along a single liberal-conservative dimension with legislators arrayed across the continuum according to their ideology. Any new legislation must overcome a potential filibuster or veto; since we presume that legislators vote solely based on their ideology (broadly construed); this effectively means that it must be supported by two pivotal players to pass. The first provides the pivotal vote needed to overcome a potential filibuster while the second provides the pivotal vote needed to overcome a veto (if the bill does not secure the governor’s support).

The position of the so-called “pivotal” legislators determines whether any given status quo policy can be replaced with a new policy. When it cannot we have gridlock. Adding the potential for an outside group to sponsor an initiative directly to the people breaks the legislative monopoly on policymaking and under certain conditions breaks legislative gridlock and changes the final policy outcome.

Our model generates both expected and surprising results. Consistent with previous work, we find that the availability of the initiative process increases the potential for legislative action because legislators anticipate what will happen if they fail to act. More surprisingly, however, initiatives do not occur simply due to legislative gridlock. Rather, they occur when a pivotal legislator sits in the right place on the liberal-conservative spectrum. A pivotal legislator in this spot can exploit the initiative’s presence to thwart legislative action in favor of the ballot measure outcome that he or she ultimately prefers. We show that the set of policies for which a ballot measures occurs (i.e., the area of policies for which the pivotal legislator’s location allows him or her to stall legislative action and thereby engender a ballot measure) increases as these pivotal actors get further away from the median voter in the state. Modern legislative polarization creates exactly such conditions for initiative success.

We also use longitudinal data in the state of California to demonstrate and illustrate this relationship. California not only uses the initiative a great deal, but changes in their legislative procedures correspond to its recent era of high usage. In 1978, California voters passed Proposition 13, the well-known ballot measure that set off the Tax Revolt wave that spread across the US states. In addition to reducing property tax rates and maximum property tax increases, Proposition 13 also mandated a supermajority requirement for bills that sought to raise taxes – 2/3 of the legislature had to approve such an increase. In effect, this supermajority rule mimics the filibuster by requiring more votes to pass new legislation. According to our model, such a rule should lead to more initiatives. As shown in Figure 1, this is exactly what happens.

Figure 1 – Initiative use and supermajority requirement in California 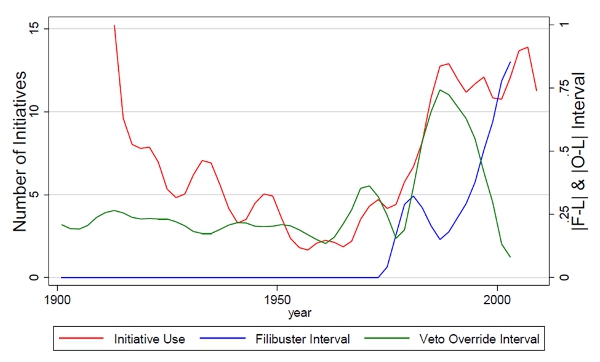 The red line shows the number of initiatives per legislative session while the blue and green lines show the distances between the filibuster and veto pivots, respectively. The number of initiatives clearly jumps dramatically in the 1980s and our theory suggests two factors caused this. Initially, a concomitant increase in the extremity of the pivotal legislator needed to overcome a veto leads to a surge in ballot measures. This move increases the number of policies that the pivotal legislator can block thereby producing an increase in the number of policy debates that could be resolved by initiatives. Yet despite a return to a less extreme position during the 1990s, which ought to have produced fewer initiatives, initiative use remained high due to a counteracting shift by the other, recently created, pivotal legislator. With the introduction of the supermajority requirement in 1978, California effectively created a filibuster requirement for tax bills. While this made the identity of the pivotal filibuster legislator more extreme starting in 1979 (since passage required 66 percent support rather than just 50 percent) the difference was initially not great but shot up significantly in the 1990s. Thus, it seems that most of the resurgence in initiative use in California coincides with the introduction of additional hurdles in the legislative process which are magnified by an increase in polarization.

This article is based on the paper, ‘Pivotal Politics and Initiative Use in the American States‘, in Political Research Quarterly.

Tracy L. Osborn – University of Iowa
Tracy Osborn is an Associate Professor in the Department of Political Science at the University of Iowa.  Her research focuses on women and politics in U.S. state legislatures, Congress, and political behavior.  Her recent book, How Women Represent Women: Political Parties, Gender, and Representation in the State Legislatures (Oxford University Press, 2012) examines how Democratic and Republican women represent women’s issues under different legislative conditions.

Emily U. Schilling – University of Iowa
Emily Schilling received her PhD from the University of Iowa and currently is Postdoctoral Research Associate at Washington University in St. Louis. Her study interests are in American Politics, in particular Congress and state legislatures.  Her research focuses on voting decisions made in legislating bodies.