Only six months ago former Florida Governor Jeb Bush was considered by most pundits and commentators to be the front-runner for the Republican Party’s 2016 presidential nomination. Now, the brother and son of two former presidents is confronted by a downward polling spiral in the face of rivals such as Donald Trump and Marco Rubio. Christian Abueg argues that Bush’s electoral woes stem from a base which has shrunk in the last decade as the GOP has moved to the right, and that over the past 50 years, no politician with such a large gap between campaigns has taken the White House.

Jeb Bush is slowly becoming an obsolete candidate for President. With his poor debate performance alongside criticisms of his ‘low-energy’, he has suffered a downward spiral in the polls. An explanation for this is not just his ‘mundane personality or his sheer inability to excite the conservative base’ but also the length of time he has been away from the campaign trail. The last time Governor Bush ran a campaign was a gubernatorial reelection campaign in 2002. It also does not help that in the intervening 13 years, the Republican base has certainly shifted further to the right than he has. A Pew research poll conducted from 1994 up until the recent 2014-midterm elections show a clear political polarisation in US politics.

Figure 1 – Partisan Composition of the 1994 Electorate. 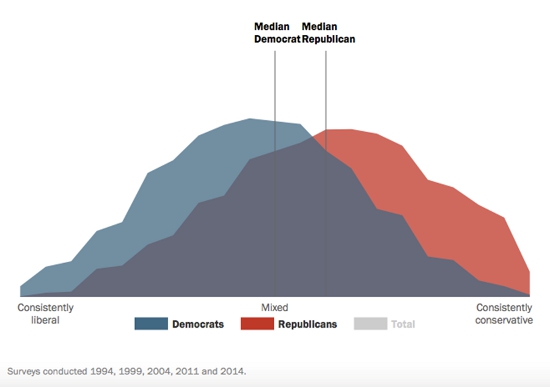 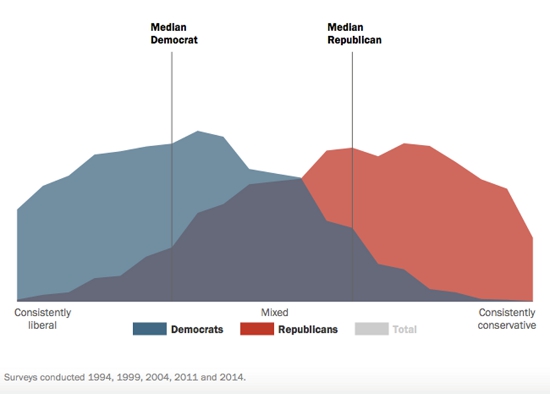 The growing ideological consistency seen within the Republican Party and its more conservative base signify that Bush has fewer moderate Republicans to rely on as a base for his primary bid than any other Republican in the past two decades. With a Republican Party that has shifted further right, it has left Bush behind. David Karol has observed that “The Republican Party’s success in Congressional Elections tends to reinforce the view of many that they can win in 2016 without making major changes.” This point is at the heart of Bush’s dilemma, Republicans were able to shift the balance of power of the Senate in 2014 whilst maintaining their large majorities in the House through their conservative base. From the Party’s point of view, why change what works?

Adding to Bush’s electoral troubles is that history shows that over the past 50 years, candidates who run Presidential Campaigns 2 years or 4 years after their last campaign, have far greater success in capturing their party’s nomination than those who waited for a much longer period of time.

Governor Michael Dukakis (D-MA), Governor Bill Clinton (D-AR), Governor George W. Bush (R-TX), and Senator John Kerry (D-MA) each waited two years after their last campaign for either Governor or Senator to run, and successfully obtained their party’s nomination for the Presidency. However, from this list only Bill Clinton and George W. Bush were successful in their races for the White House.

Additionally, Vice-President Hubert Humphrey (D-MN), President Gerald Ford (R-MI), Governor Ronald Reagan (R-CA), Vice-President Walter Mondale (D-MN), Senator Bob Dole (R-KS), Senator John McCain (R-AZ), Senator Barack Obama (D-IL), and Governor Mitt Romney (R-MA) each waited four years after their last election before being their party’s nominee to become President. (In this list, only Ronald Reagan and Barack Obama were Presidential winners since President Gerald Ford lost to Gov. Jimmy Carter). Moreover, Gov. Jimmy Carter (D-GA) in 1976 and Vice-President Richard Nixon (R-CA) in 1968 were the only two candidates in the last 50 years who waited 6 years to become their party’s nominees, and both of them went on to the Oval Office.

So how does Governor Jeb Bush fit into this data? Well to put it frankly, he does not. In 2016, it will have been 14 years since Governor Bush ran a campaign. This highlights his main problem in capturing his party’s nomination, which is no doing of his own but rather a generational shift in the Republican Party to the right. Moreover, Governor John Connally (R-TX) was the only other recent candidate who waited the same time as Bush to run for the Presidency. In his 1980 run, Connally outraised each of his opponents yet only was able to capture the support of a single delegate for the nomination. So far Bush has outraised his opponents, but given his low polling, his ability to secure the nomination looks dim.

Bush is not a candidate with insufficient name branding or someone who lacks the ability to raise money. His problem now is the Republican Party and its far more conservative base. David Brooks from the New York Times argues, that Jeb Bush would have been an extremely “effective candidate in 1956 – but these are different times.”  And they most certainly are different times; split between the establishment and Tea Party wings, the GOP is creeping further and further to the right, a trend exacerbated by the strong surge of presidential hopefuls like Donald Trump and Dr. Ben Carson. This leaves establishment candidates like Jeb Bush with little maneuverability since the Republican Party he was indoctrinated in is no longer that same party. Bush bluntly acknowledged this shift and stated in an interview of how the modern day Republican Party works: “lose the primary to win the general.” However, it does not take a Political Scientist or even a Politics 101 tutor to remind Bush that those who lose the primary do not go on to the general.

In 2012, when Gov. Mitt Romney’s conservative credentials were constantly being doubted his advisor commented in a CNN interview that once Romney captured the Republican nomination “Everything changes. Almost like an Etch-A-Sketch. You can shake up and restart all over again.”  Romney and his advisors demonstrated a clear understanding of this; move as far to the right as you can in the primary and reset your campaign in the general to be more appealing to the independent voter. Bush has to employ nearly the same strategy as Romney did in 2012 if he ever wants to walk onto the 2016 GOP National Convention stage in Cleveland, Ohio. Without a clear understanding of how far the party has moved to the right, Bush’s campaign is undoubtedly doomed for failure especially when other candidates, like Sen. Ted Cruz (R-TX), are easily tapping into the conservative voter discontent. Presidential hopeful Gov. Scott Walker (R-WI) was forced out of the race after only 71 days because of his inability to gain conservative traction in early states. Bush appears to be heading the same way.

There is an old rule in politics, “if you’re going to shoot for the King, don’t miss.” But as Bush tries to bounce back from becoming the ‘forgotten front-runner’ by attacking anyone who is ahead of him in the polls such as Trump or Sen. Marco Rubio (R-FL), he’s missing the bigger picture – his establishment credentials are just not right for the times because the ground has shifted beneath his feet. Since the last time he ran his ground campaign in Florida in 2002, the firm ground on which he and his party once stood has undoubtedly eroded. The Republican Party that once was the party of both George Bush(es) is no longer that same Republican Party.