The Iran nuclear deal: driven by international factors for the US, and domestic ones for Iran.

The Iran nuclear deal: driven by international factors for the US, and domestic ones for Iran.

In July, Iran and the P5+1 reached an historic deal over Iran’s nuclear program. Steven Hurst takes a close look at the factors which explain why Iran and the other key negotiator – the US – were able to come to a deal. He writes that sanctions alone do not explain Iran’s change in policy, and that the US compromise was driven by President Obama’s acceptance of the limits of US foreign policy.

In July 2015 Iran and the international community reached a resolution (the Joint Comprehensive Plan of Action or JCPOA) to their dispute over the former’s nuclear programme. After years of disagreement and failed negotiations, what were the key factors that led the two key actors in the negotiations, Iran and the United States, to agree to this historic compromise?

As part of the deal, Iran agrees to cut its operating centrifuges to 5000; limit uranium enrichment to 3.7 percent; cap its stockpile of low-enriched uranium at 300 kilograms; redesign its Arak reactor so it can’t produce weapons grade plutonium and submit to an extensive inspection regime.

For their part, the international community acknowledges Iran’s right to continue enriching uranium and agrees to the lifting of sanctions.

To an extent, the willingness of each side to accept the deal reflects concessions made by the other which acknowledge their most fundamental concerns. Iran can continue enriching and the international community has assurances that Iran will not be able to develop nuclear weapons. Nevertheless, that alone does not explain why each side felt compelled to make significant concessions or why both saw this compromise as preferable to the alternatives.  To do that we have to look at other factors: 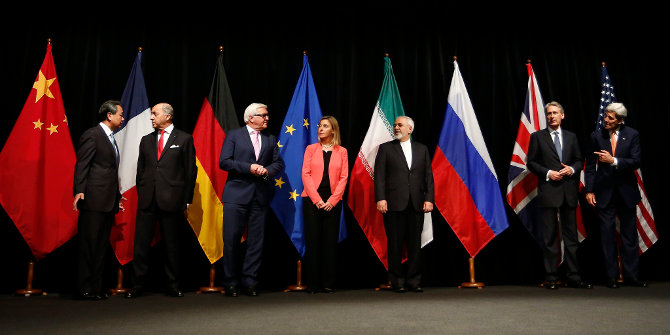 While this is hardly an exhaustive analysis of the agreement reached in July 2015, it does outline some of the key factors in Iranian and American policy and suggests that each was driven by rather different imperatives. Iranian policy was strongly shaped by domestic political factors while US policy, despite all the domestic controversy that accompanied the agreement, was largely driven by ‘international’ considerations.