Until the 1980s most large corporate layoffs meant the temporary suspension of employment, rather than the more permanent downsizing which we know today. In new research which examines nearly 700 layoff announcements over 16 years, Jiwook Jung examines what led to this change in corporate policy. He finds that the decline of industrial unions led what were once temporary layoffs, which were often followed by recall in better economic times, to become permanent. Though labor unions resisted this shift, their decline meant that firm managers were able to gain an upper hand in making decisions about layoffs.

In February, 1993, IBM, the world’s largest computer maker, announced that it would order the first layoffs in its then 80-year history. In the face of tougher international and domestic competition, the company had suffered from a steady decline in profitability and slow growth throughout the 1980s; workforce adjustment and cost reduction seemed warranted. Nevertheless, IBM’s decision marked a drastic departure from its acclaimed tradition of lifetime employment. Throughout its history, it had prided itself on caring for its employees. Seen in a broader context, however, what was truly remarkable was the fact that the company had managed to avoid layoffs for so long; most of its peers had already accepted the practice as necessary.

Indeed, corporate America had experienced waves of downsizing since the 1980s. And even before the 1980s, firms made layoffs during economic downturns. But the 1980s marked a sea change in the layoff policy of large US companies. Whereas layoff had previously meant temporary suspension of employment with an explicit or implicit agreement that laid-off workers would be called back when economic situations improved, it has recently come to mean permanent termination (see Figure 1 below). Moreover, unlike in the past, even healthy, profitable companies have begun to engage in downsizing. For instance, in 1993 Xerox announced its plan to cut 10,000 jobs or nearly 10 percent of its work force, although the company had been consistently profitable before the announcement. Its CEO explained that in order to compete effectively, the company would have to be lean and flexible. 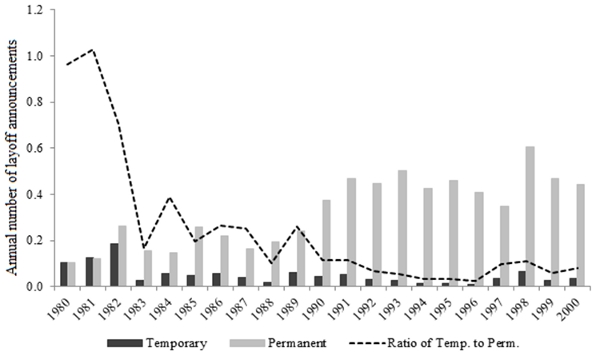 Note: This figure plots the average count of the number of layoff announcements made by 679 large US firms from 1984 to 2000 in a sample constructed by the author.

What can explain this radical shift in layoff policies at large US companies? Factors put forward to explain this phenomenon have included: intensifying market competition, declining manufacturing activities, and technological innovation that has replaced human labor. While these are all important factors, such explanations neglect political-institutional aspects of the shift. In new research, I show that behind this transformation of layoff policies were changing inter-class power relations within large US firms. Several previous studies show that powerful shareholders and top managers promoted permanent layoffs as a strategy to maximize shareholder value—the firm’s stock price. These studies, however, do not provide the full picture of inter-class power struggle over layoff policies. While focusing on the role of shareholders and top managers, they overlook how workers and labor unions contested the transformation of layoff policies and how the broader political environment constrained their ability to resist.

In my work, I explore labor unions’ resistance to the shift from temporary to permanent layoffs. Apparently, labor unions fiercely resisted, but given their declining political influence it is an open question how effective their resistance was. Industrial unions, especially those in key manufacturing sectors such as automotive and steel, once played a significant role in establishing a set of formal rules and informal norms that induced firms to ensure employees saw their employment security was tied to their reciprocal commitment to the company. Temporary layoffs followed by recall were one such action signaling this commitment. Through this practice, firms adjusted workforce size during economic downturns, while workers remained committed to their original employers.

The industrial unionism that guided employment practices in many large US companies, however, began to fall apart in the late 1970s. As the influence of industrial unionism receded, a new set of principles emerged to reshape the employment policies of US firms. As many firms suffered from a chronic decline in their market share and profitability, new power groups in financial markets, especially large institutional investors (e.g., mutual and public pension funds) began to pressure management to enhance profitability and maximize returns to shareholders. Pressured by institutional investors and also emboldened by the Reagan administration’s pro-business stance, firms began to actively engage in massive downsizing in order to maintain, restore, and even boost their stock price. This further weakened the bond between employees and employers.

Despite the changed economic and political circumstances, my statistical analysis of both temporary and permanent layoff announcements made by 679 large US companies from 1984 to 2006 shows that temporary layoffs persisted longer within union strongholds. In other words, firms in highly-unionized sectors were more likely to make temporary layoffs. The analysis also shows that permanent layoffs were suspended under the threat of union strikes. Specifically, the rate of permanent layoff announcements was reduced by 32 percent for firms that experienced a work stoppage. An additional analysis shows that the positive effect of union membership on the rate of temporary layoffs was significantly smaller under the two consecutive Republican administrations in the 1980s and the early 1990s. This result suggests that the pro-business stance of Republican administrations significantly weakened unions’ ability to maintain temporary layoffs.

These results show how labor unions, despite their declining political influence, resisted the shift in layoff policies, firstly by negotiating with firms for more reliance on temporary layoffs when workforce adjustment was unavoidable, and secondly by discouraging firms from making permanent layoffs through direct confrontation. But the flipside is that the steady decline in union membership and strike activities gave management a free hand in making layoff decisions. An irony here is that although US firms engaged in downsizing to achieve greater profits and higher stock price, most studies find that downsizing failed to improve firm profitability. Nevertheless, such disappointing outcomes did not deter firms. Downsizing continued throughout the 1990s. The consequential institutionalization of downsizing suggests that without significant political protection, workers’ share of corporate resources (i.e., jobs and wages) is an easy target for firms that seek a quick boost in profits and stock price.

This article is based on the paper, ‘A struggle on two fronts: labour resistance to changing layoff policies at large US companies’, in Socio-Economic Review.