The years following the global economic crisis of 2008-2009 have been marked by policy uncertainty, both in the US and across the world. In new research, Scott R. Baker, Nicholas Bloom, and Steven Davis develop an index of economic policy uncertainty to examine how this uncertainty shapes economic outcomes. Using data going back to 1900 and extending coverage to 11 major economies, they find that heightened levels of policy uncertainty leads to firms reducing investment and employment, which in turn contributes to the sluggish growth which many economies have experienced in recent years.

Concerns about policy uncertainty have intensified in recent years, both in the United States and across the globe. Factors such as polarized electorates, the economic upheaval from the Global Financial Crisis, and continual crises in the Eurozone have all contributed to a tumultuous policy environment and uncertain future.  Among others, the Federal Open Market Committee and the IMF suggest that uncertainty about US and European fiscal, regulatory, and monetary policies have contributed to a steep economic decline in 2008-09 and slow recoveries afterwards. In new research we investigate the role of policy uncertainty in shaping economic outcomes, finding that elevated policy uncertainty in many countries around the world has contributed to sluggish growth in recent years.

To investigate the role of policy uncertainty in shaping economic outcomes, we first developed an index of economic policy uncertainty (EPU) for the United States and examine its evolution since 1985.  Our index reflects the frequency of articles in 10 leading US newspapers that contain the following triplet: “economic” or “economy”; “uncertain” or “uncertainty”; and one or more of “congress”, “deficit”, “Federal Reserve”, “legislation”, “regulation” or “White House”. As seen in Figure 1, the index spikes near tight presidential elections, Gulf Wars I and II, the 9/11 attacks, the 2011 debt-ceiling dispute and other major battles over fiscal policy. 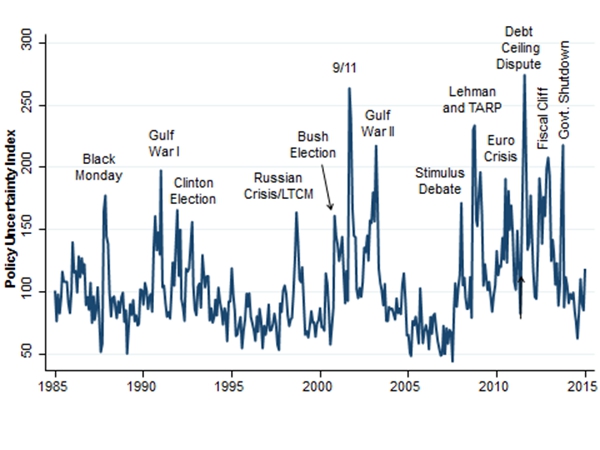 We extended our newspaper-based approach to measuring policy uncertainty along three dimensions: back in time, to specific policy categories, and across countries. For instance, Figure 2 shows the evolution of policy uncertainty in the United States back to 1900. This long-span EPU index highlights pre- World War II political developments and shocks like the Gold Standard Act of 1900, the outbreak of World War I, the Versailles conference in 1919, and a sustained surge in policy uncertainty from late 1931 when President Hoover, and then President Roosevelt, introduced a rash of major new policies. The index also shows an upward drift since the 1960s, perhaps due to rising political polarization or the growing economic role for government. 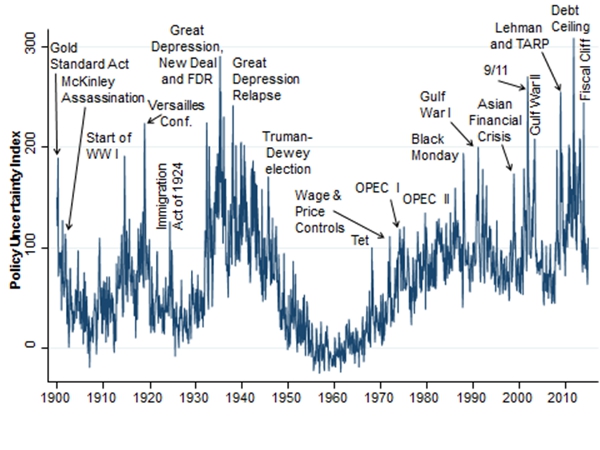 We were also able to break down the key policy terms leading to changes in uncertainty over time by flagging newspaper articles about particular aspects of policy uncertainty. We find that in the United States, taxes, government spending and healthcare regulatory uncertainty are the largest factors driving the increases since 2008.  Our newspaper-based approach points to unusually high levels of uncertainty in recent years about future tax rates and government spending, and about the passage and implementation of the Affordable Care Act.

Intriguingly, our approach does not show unusually high levels of monetary policy uncertainty after the Global Financial Crisis, at least in the United States. This result might seem surprising, given the attention among professional economists to unconventional monetary policies and concerns related to the zero lower bound.  It appears that low and stable inflation and interest rates have muted concerns about monetary policy uncertainty in mainstream US newspapers.

We then extended our methods to cover 11 other major economies: the United Kingdom, France, Germany, Italy, Spain, Canada, China, Japan, South Korea, India, and Russia. For these countries, we employ local language newspapers and a similar set of policy-related terms.

Since our indices point to historically high uncertainty related to economic policy in recent years, it’s natural to investigate the effects of policy uncertainty on economic performance.

These firm-level results point to a causal impact of policy uncertainty on investment and employment in sectors that rely heavily on government spending. For instance, in an environment with more uncertainty about future policy, firms may be hesitant to make irreversible or costly investment and hiring decisions.  However, the results offer limited guidance about the magnitude of aggregate effects, in part because they focus on one specific policy uncertainty channel (government purchases of goods and services).

Our second approach fits vector autoregressive (VAR) models to US data and to an international panel that exploits our EPU indices for 12 countries. The US VAR results indicate that a policy uncertainty innovation equivalent to the actual EPU increase from 2005-06 to 2011-12 foreshadows declines of about 6 percent in gross investment, 1.2 percent in industrial production and 0.35 percent in employment. The 12-country panel VAR yields similar results, as seen in Figure 3. These VAR results are not necessarily causal, but they suggest policy uncertainty shocks have material effects. One interpretation of the micro and macro evidence is that policy uncertainty retards investment, hiring and growth in policy sensitive sectors like defense, healthcare and construction, and these sectors are important enough for policy uncertainty to matter at the aggregate level. 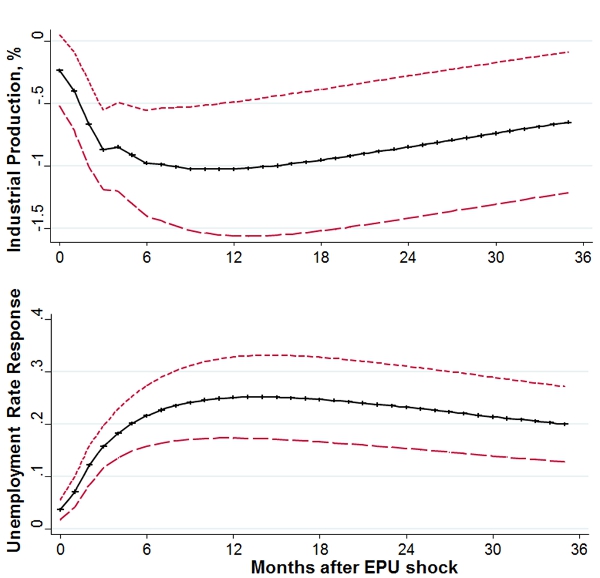 Notes: Panel-VAR estimated impulse response functions for industrial production and unemployment to an EPU innovation equal to the increase in the average US EPU value from 2005-2006 to 2011-2012, with 90 percent confidence bands. Identification based on three lags and a Cholesky decomposition with the following ordering: EPU index, log(stock market index), unemployment rate, and log industrial production.  We use own-country data and a full set of country fixed-effects in the panel VAR. Country-level data are weighted by the square root of the number of newspapers used in the EPU index. Fit to monthly data for Canada, China, France, Germany, India, Italy, Japan, Korea, Russia, Spain, UK and the US from January 1985 to December 2012, where available.

This article is based on the LSE CEP discussion paper, ‘Measuring Economic Policy Uncertainty’

Scott Ross Baker –Northwestern University
Scott Ross Baker is an Assistant Professor of Finance in the Kellogg School of Management at Northwestern University. His research is concentrated in empirical finance and macroeconomics. Recent work examines the impact of household leverage and credit constraints in driving sensitivity to both income and asset shocks. Scott was born and raised in San Diego, California and received B.A.’s in Economics and Political Science from the University of California, Berkeley. He received a Ph.D. in Economics from Stanford University.

Nick Bloom – Stanford University
Nick Bloom is a Professor of Economics at Stanford University. His research interests are investigating the causes and consequences of economic uncertainty. He also works on understanding differences in management and organizational practices across firms and countries. He previously worked as a research economist at the Institute for Fiscal Studies, a policy advisor at HM Treasury and as a management consultant at McKinsey & Company. He is a graduate of Cambridge University, with an MPhil from Oxford University, and a PhD from University College London.

Steven J. Davis – Chicago Booth School of Business
Steven J. Davis is the William H. Abbott Professor of International Business and Economics at the University of Chicago Booth School of Business and a visiting fellow at the Hoover Institution. His research interests include employment and wage behavior, worker mobility, job loss, labor market institutions, business dynamics, economic fluctuations, national economic performance, and public policy. He is a research associate with the NBER, advisor to the US Congressional Budget Office, a senior adviser to the Brookings Papers on Economic Activity, senior academic fellow with the Asian Bureau of Finance and Economics Research and visiting scholar and consultant, respectively, with the Federal Reserve Banks of Atlanta and Chicago.