The 1906 San Francisco earthquake and subsequent fire remains one of the worst natural disasters in US history. In new research, James Siodla finds that the devastation wrought by the disaster led to drastic changes in the city’s land use that can still be seen today. He writes that more than a century after the disaster, a significant difference in housing density exists between those areas which were burned and those which were not.

Historically, fires have had large impacts on urban landscapes. Destruction by fire gave thriving cities opportunities to make changes to land use, and they often did. San Francisco took advantage of such an opportunity after a devastating fire in 1906, when developers rebuilt the city with denser housing. Moreover, the fire’s impact on land use in many neighborhoods was not short-lived, but is still evident today.

At the turn of the twentieth century San Francisco was experiencing considerable growth in population and land values. With such high demand to live in the city, there was immense pressure to build taller, denser buildings to accommodate more people and economize on increasingly expensive land. Following a tremendous earthquake, the fire in 1906 destroyed more than 28,000 buildings on over 500 acres. Developers and landowners were then left to rebuild from a clean slate in the face of growing demand for space in the city; in essence, the result was massive redevelopment on a large scale in a booming city.

Under normal circumstances, the decision to redevelop urban land depends on economic factors such as the expected future rents earned from a property and the costs of redevelopment. While destructive, the fire in San Francisco accelerated the process of redevelopment by removing buildings from the landscape, thus having a cleansing effect in many ways. Poor quality buildings were removed, real estate transactions were made less onerous since buildings were no longer part of the valuation process, and passive property owners were suddenly encouraged to be active. Ultimately, the fire’s destruction incentivized landowners to either update their properties according to new economic conditions or sell to someone who would. The fire indeed was a catalyst of change.

The fire in San Francisco serves as a natural experiment whereby similarly developed areas were treated differently by the disaster. In one area, the fire completely removed buildings from the land, while nearby areas were not consumed by the flames. If the fire—which reduced certain redevelopment frictions in the areas it burned—had a significant impact on land use, then this implies that urban change through redevelopment is difficult and costly. Furthermore, the longer the impact of the fire, the greater are redevelopment frictions and the more important are large shocks in determining urban land-use outcomes over time. No impact of the fire would imply that cities adapt to new economic conditions without a hitch.

There are many potential ways in which developers could have altered the city’s land use upon reconstruction, but an important one is residential density, or residential units per residential acre of land. Residential density is an indicator of the demand for space in a city on the part of its population; the higher this density, the greater the demand. By 1915, as depicted in Figure 1 below, average residential density on San Francisco blocks increased significantly in burned areas relative to unburned areas. In fact, a significant gap in density between burned and unburned areas still existed in 1931, 1950, and even 2011. So, not only were redevelopment frictions considerable at the time of the fire—since San Francisco radically altered its land use upon reconstruction—they seem to be important throughout the twentieth century, or density in unburned areas would have caught up by now. This result holds in prominent residential neighborhoods of the city. 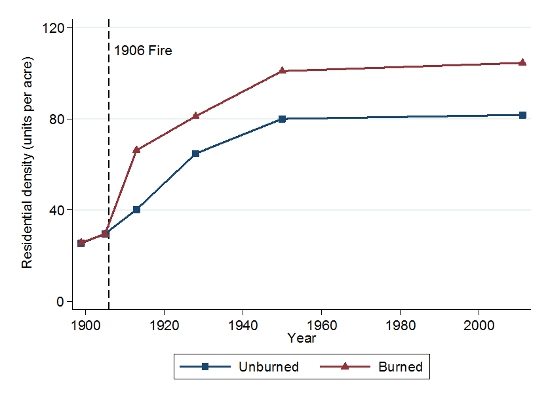 But density has caught up in some unburned areas by 2011, due largely to comprehensive initiatives aimed at redeveloping old industrial sites. One example is the Mission Bay Project, which was started by Mayor Willie Brown in 1998. The project was focused on an area that was not burned by the fire in 1906, resulting in new commercial and residential buildings that made more intensive use of the city’s land. In this case, the project has helped narrow the density gap between burned and unburned areas by catalyzing change in these less dense areas. Interestingly, large-scale developments like the Mission Bay Project help to overcome many of the frictions that can deter change, much like the fire did in 1906.

Overall, a significant legacy is present in the form and structure of urban areas, one which is greatly influenced by external shocks such as fires. Today, developers face many regulatory costs in redevelopment, which can slow down the process of change and also contribute to legacies in land use. Regulation was lax in San Francisco in the early twentieth century, and yet redevelopment was still delayed by various frictions; even a relatively free market city faces challenges in adapting to change. Thus, it is important to carefully consider the regulations we do impose on the redevelopment process, especially since cities are important engines of economic growth.

Caveat: One possible implication of this study’s findings is that cities should be razed in order to encourage the changes necessary to accommodate growth. But this is just a silver lining in the story; there is also a cost side that has not been considered here. The costs of disasters are tremendous, with important consequences for the economic welfare of citizens and business owners. It is important to keep this in mind when thinking about disasters in cities.

This article is based on the paper, paper ‘Razing San Francisco: The 1906 disaster as a natural experiment in urban redevelopment’, in Journal of Urban Economics.

James Siodla – Colby College
James Siodla is an Assistant Professor of Economics at Colby College. He earned his PhD in economics at University of California, Irvine, and has research and teaching interests in urban economics and U.S. economic history. His research is aimed at understanding the challenges faced by U.S. cities in the nineteenth and early twentieth centuries, as well as the persistence of historical shocks in urban settings.