Fed up with Congressional inaction, this week President Obama announced a series of new executive actions to tighten gun control measures by expanding and improving the speed of background checks and providing more investment into gun safety technology. Mark Gius argues that because of the way that the Federal background check system works, as well as a lack of funding, the measures will likely to do little to actually reduce US gun violence.

On January 5, 2016, President Obama announced a range of executive actions aimed at strengthening US gun control measures.  Most of the actions deal with modestly expanding background checks for firearm purchases, improving state reporting of criminal and mental health records to the National Instant Criminal Background Check System (NICS), improving the speed with which background checks are performed, and investing more in research on gun safety technology. All of the actions taken by President Obama do not carry the weight of law and may be undone by the next President.  In addition, several of the measures proposed by the President, such as improving the NICS technology or investing in gun safety technology, require funds that can only be approved by Congress.  Given that both the House of Representatives and the Senate are Republican controlled, that is highly unlikely to happen. Criticism of these measures from gun control opponents and Republican Presidential candidates was swift and unrelenting. Unfortunately, the actions that President Obama has undertaken will probably do little to reduce gun violence in America.

In order to understand the limitations of the President’s executive actions, it’s necessary to understand the way in which the Federal firearms background check system works in the United States.  Starting in February of 1994, the Federal government required all buyers of handguns to undergo a background check in order to determine if they are legally allowed to possess a gun.  This requirement was part of the Brady Handgun Violence Prevention Act (Brady Act) of 1993.  Potential reasons why a person may fail a background check include felony convictions, felony indictments, domestic violence misdemeanors, restraining orders, fugitive status, illegal alien status, mental illness or disability, drug addiction, and local or state prohibition.  From February of 1994 to November of 1998, the act only applied to handgun sales.  In November of 1998, the permanent provisions of the Brady Act took effect.  These permanent provisions established the National Instant Criminal Background Check System (NICS) and extended the act’s provisions to purchasers of long guns and to persons who redeem pawned firearms.

The procedure for conducting a firearms background check is initiated by a federally licensed firearms dealer (FFL).  The prospective purchaser of a gun must complete a Federal Firearm Transaction Record and must provide a government-issued photo identification card.  The FFL then contacts the FBI or state authority in order to determine if the prospective buyer is legally allowed to purchase a firearm.  The FFL is then notified whether or not the sale may proceed or if the sale must be delayed pending further investigation.  If the FFL has not been notified within three business days, then the sale may be completed; this type of sale is known as a “default proceed”.  Since 1994, less than 2 percent of firearm sales have been denied.

Given the above, President Obama’s actions seem trivial at best.  For example, expanding the definition of “gun dealer” only gets you so far.  In most states, there is no registration required for any type of firearm, especially for long guns such as assault weapons.  Hence, there is no way for the government to find out if a person sells more than a certain number of guns in a given month. Although it may be possible to track people who frequent gun shows or who use the internet to sell firearms, it would be difficult to monitor the entire private firearm market in the US. In addition, although there has been progress made in convincing states to be timely in their reporting of prohibiting behaviors to the National Instant Criminal Background Check System, the Federal government is still very dependent upon the cooperation of state governments.  Finally, although improving the efficiency of the NICS may reduce the number of “default proceeds,” it is not realistic to expect the Republican-controlled Congress to appropriate funds for anything that appears to further restrict gun rights.

Hence, although much has been made about President Obama’s executive actions, both by the President himself and by his critics, none of these measures will significantly reduce the US murder rate. Some of these actions will never be implemented due to a lack of funding.  Others will only marginally increase the number of firearm transfers subject to background checks.

Finally, not only are these measure too little, but they are also too late.  Too late for the over 30,000 persons who were killed by a firearm last year.  Although some research, including the author’s own, has suggested that expanded background checks would reduce the firearm murder rate by keeping firearms out of the hands of those who shouldn’t have them in the first place, the actions taken by the President are marginal at best and would probably do little to reduce firearm violence in the United States. 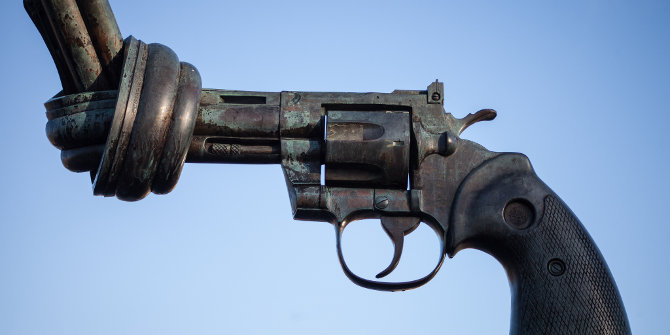