Certain occupations have an unusually high concentration of gay or lesbian workers. In new research, Michel Anteby, Carly Knight and András Tilcsik examine why this might be the case. They write that in order to adapt to discrimination, gay and lesbian workers are likely to have been more drawn towards occupations which require high levels of task independence and/or social perceptiveness. While society is becoming more tolerant, occupational patterns are slow to change; they expect these patterns to be in place for the foreseeable future.

There is an unusually high concentration of gay or lesbian workers in certain occupations. For example, both gay men and lesbians and are overrepresented in psychology, law, social work, and university teaching. And there are real occupational patterns behind some popular stereotypes, from the gay flight attendant to the lesbian truck driver.

Where does this kind of occupational segregation come from? This question has puzzled social scientists for nearly a century, but it is not simply an academic problem. Occupational segregation matters because it can lead to inequality between workers and limit the talent pool for employers trying to fill a position.

Our second prediction was about occupations that require a high level of social perceptiveness — that is, the accurate anticipation and reading of others’ reactions. Since gay men and lesbians tend to experience the threat of discrimination from a young age, knowing how to read social cues might be an important acquired skill for these individuals. Thus we expected that gay men and lesbians would be more likely to be in jobs that require high levels of social perceptiveness (e.g., psychologists and teachers) rather than in ones where such a skill is less needed (e.g., laboratory scientists and actuarial analysts).

To test our hypothesis, we analyzed data from two datasets. One was the 2008-2010 American Community Survey (ACS), which provides a nationally representative sample of nearly five million people in the United States. We also tested our hypotheses on a second sample, the fourth wave of the U.S. National Longitudinal Study of Adolescent Health, collected in 2008-2009. Consistent with our predictions, both gay men and lesbians tend to concentrate in occupations that provide task independence or require social perceptiveness, or both.

Our findings suggest that gay and lesbian workers might be drawn to a different set of occupations than heterosexual workers and perhaps bring with them a distinct set of skills to these occupations. Gay and lesbian workers probably developed some of these skills as a result of social adaptation to discrimination. As societies become more tolerant of same-sex relationships, however, the need to conceal one’s sexual orientation in everyday social interactions might fade over time. As a result, gay men and lesbians may lose their skill for social perceptiveness, which may make them less distinct in the labor market. But we expect that the patterns we observed will remain in place for the foreseeable future. Occupational patterns are usually slow to change because they continue to reflect earlier educational and career choices and because the gay- or lesbian-friendly reputation of an occupation can persist for a long time and continue to draw gay and lesbian workers.

This article originally appeared at the LSE Business Review and is based on the authors’ paper Concealable Stigma and Occupational Segregation: Toward a Theory of Gay and Lesbian Occupations, Administrative Science Quarterly, 2015, 60(3): 446-481.

Carly Knight – Harvard University
Carly Knight is a PhD Candidate in the Department of Sociology at Harvard University. Her research addresses questions regarding the state, labor markets, and inequality. Current projects examine how labor market considerations affect gender attitudes and the efficacy of anti-discrimination law on corporate behaviour. She is also engaged in a historical research project addressing state corporate regulation; her dissertation investigates the history of corporate personhood law. 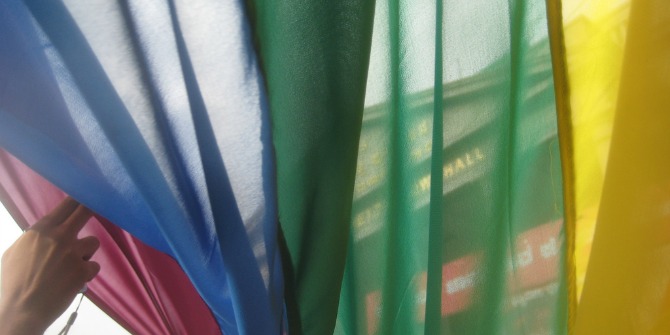