Recent years have seen many red states introduce new voter identification laws, with politicians often citing the need to maintain public confidence in the voting process as a justification. But is public confidence in voting driven by other, more subjective factors? In new research using election polling, Michael W. Sances and Charles Stewart find that voters are more likely to believe that elections have been fair if their candidate wins and less so if when their favored candidate loses.

Last week, a federal court heard closing arguments in a case involving North Carolina’s voter identification law. In 2013, the Tar Heel state joined several others in passing legislation requiring voters to present photo identification at the polls, or else be turned away. Both in passing the law and in defending it in federal court, state officials have repeatedly invoked public confidence in the integrity of the voting process as a justification for requiring ID. While opponents of such laws deny they actually increase public confidence (as well as claiming that they disenfranchise minority voters), both sides agree that boosting public confidence in elections is a worthy goal.

Why might public confidence not reflect reality? For one, most voters know little about the basic facts of politics, let alone the more complicated processes that go into election administration. For another, there is overwhelming evidence from psychology that our perceptions of fairness are driven by self-serving biases: if my team wins, I think the game is played fairly, but if my team loses, I think it is played unfairly.

Thus it is not surprising that when pollsters ask voters to evaluate the fairness of election administration, the same lack of knowledge and self-serving biases come into play. Since the 2000 election – a debacle that created renewed interest in public confidence in elections – more than 30 surveys from a variety of polling houses have asked voters how confident they were that their votes were counted as they intended. These surveys typically also ask how confident voters were that votes around the country were counted as intended.

As Figure 1 shows, overall confidence in the counting of “my vote” and “the country’s vote” has declined since 2000, even in spite of the significant overhaul of election administration that has occurred since then. Each point in this graph represents the proportion of voters answering “very confident” to the confidence question on an individual survey. In 2000, about three quarters of voters were “very confident” that their own vote was counted as intended, and about half were “very confident” that votes around the country were accurately counted. Confidence then declined gradually over time, so that in 2012, the proportions were about 60 percent very confident in their own vote, and just 20 percent in votes around the country. 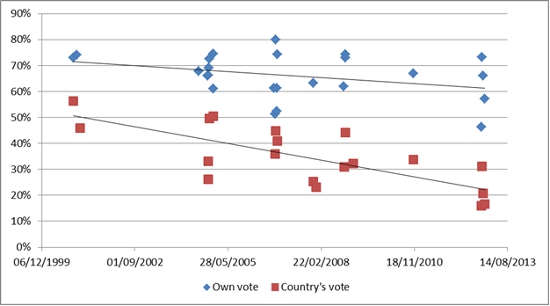 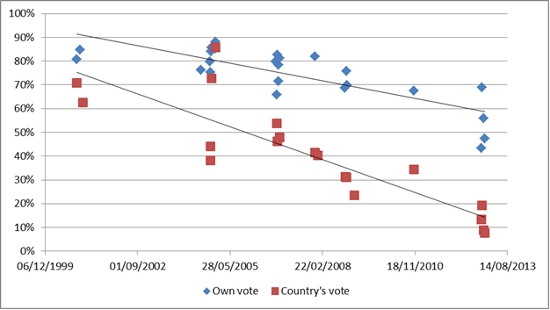 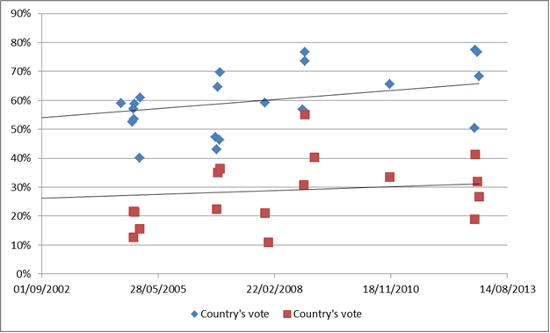 Yet Figures 2 and 3 suggest this overall decline was largely driven by self-serving biases. In the middle panel, the data represent responses from Republican respondents only. Republicans began the time period with relatively high confidence – for instance, about 70 percent were very confident in the integrity of the country’s vote in 2000. Yet this declined to less than 20 percent in 2012. The pattern for Democrats, seen in the bottom panel, is symmetric: Democrats’ confidence was lower than Republicans in 2000, but slightly increased by 2012.

A close look at these aggregate patterns suggests that most of the over-time change was due to the 2008 election, which saw a shift in control of the White House from the Republicans to the Democrats. This suggests that voters’ confidence is indeed driven by who wins – if my candidate wins the election, I trust the process more. Yet given the aggregated nature of the data, this conclusion is only tentative.

To test whether who wins has a causal impact on public confidence, we can zoom in on particular elections, such as 2008. In this election, two polling houses asked the same respondents about their confidence before and after the election. In particular, the Pew Research Center asked respondents how confident they were that their vote would be (or after the election, was) counted as intended, and the National Annenberg Election Survey asked about confidence in the national vote. Comparing how the same respondents changed their confidence in reaction to the election outcome means we can rule out many alternative explanations for why aggregate confidence might have changed after 2008.

The results of this comparison, as shown in Figure 4, are revealing. While all voters saw an increase in confidence in their own vote, the increase was 15 percentage points greater for Obama voters, whose preferred candidate won. Likewise, Obama voters saw an increase of about 25 percentage points in confidence in the country’s vote, whereas McCain voters’ confidence declined by about twenty points after their candidate lost. 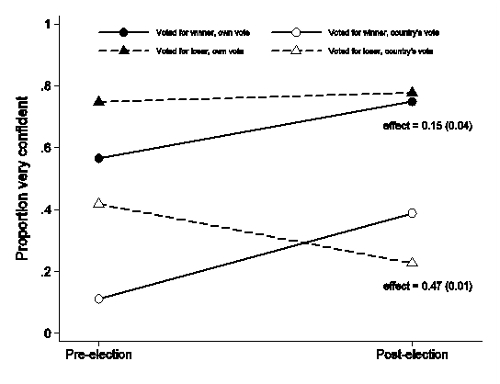 Correlation is not causation, of course – even when comparing the same people over time. Perhaps McCain voters would have decreased their confidence anyway, even if McCain had won. In an ideal but unrealistic world, we would want to randomly assign election outcomes, which would ensure winners and losers are otherwise identical in every single way, and then observe how confidence changes for each group. 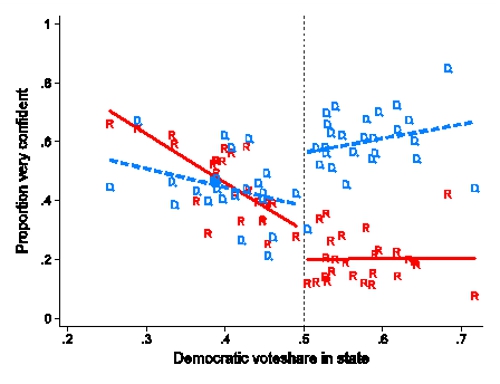 It is worth emphasizing that respondents were not asked on these surveys to rate their generalized trust in government, or even how “fair” they think elections are. Rather, respondents were explicitly asked if they believe electoral fraud is occurring – if votes were counted as they were intended to be. Despite the gravity of the question, however, voters’ responses appear largely disconnected from the objective performance of elections, and are instead strongly influenced by whether their candidate wins.

Opponents of voter identification laws regularly accuse supporters of cloaking their political motivations behind a concern for maintaining the integrity – both actual and perceived – of the electoral system. Ironically, however, the data presented here suggest that the perceived integrity of the electoral process is itself driven by political motivations. To the extent that voter identification laws are able to shape confidence in elections, political impacts – effects on who votes and who wins – may in fact be a necessary condition.

This article is based on the paper, ‘Partisanship and confidence in the vote count: Evidence from U.S. national elections since 2000’, in Electoral Studies.

Charles Stewart III – MIT
Charles Stewart III is the Kenan Sahin Distinguished Professor of Political Science at MIT, where he has taught since 1985, and a Fellow of the American Academy of Arts and Sciences. His research and teaching areas include congressional politics, elections, and American political development.