How the culture wars are driving political polarization

How the culture wars are driving political polarization

While there has been increasing comment and concern over the apparent polarization of the American electorate, recent research on culture and politics largely denies the existence of such polarization. In new research which focuses on Americans’ ideological identities, Duane F. Alwin and Paula A. Tufiş find that voters have indeed become polarized over time, and that their political identities are increasingly informed by cultural, rather than class or economic factors.

During the present and (most) past presidential primary seasons, it is not surprising that the American electorate has seemed to be polarized, both within and between the two major political parties. Candidates on both sides of the Democrat-Republican divide go to extremes in appealing to their base(s), thus creating the image that the population is deeply divided around ideological issues.  Most political scientists and sociologists acknowledge these election-year phenomena, and while most also admit to the impact of social divisions on political life, most who have studied the American political scene conclude that overall polarization does not characterize American politics, nor the policy attitudes of the American people.

In fact, virtually all the available research on culture and politics, drawn largely from sociological and political science sources, denies the existence of political polarization and characterizes it as nothing more than an imaginary phenomenon promoted by journalists and the cable news media, with a focus primarily on congressional politics. They argue that the overwhelming majority of Americans do not follow political elites to the extremes, and the public (more or less) maintains a kind of “political innocence” on most policy issues (e.g. abortion rights, or gun control). These arguments of an un-polarized electorate are bolstered by the time-worn view among American political scientists that there is a low level (and high variance) of political knowledge in the American public, and that political life can hardly be characterized in terms of a battle between warring ideological factions.

In our research, we re-examine these assumptions using some of these same data in a completely different way, and in a framework using more than one variable. We focused on “ideological identities” and the extent to which the American electorate can be said to be polarized. We find, in contrast to the vast majority of other analysts of empirical data, plenty of evidence of polarization in political identities (self-ratings of liberal vs. conservativism), using a number of different quantitative measures of polarization.  We argue that these changes reflect a shifting polarity in American politics more generally in which voters’ economic interests take a backseat to “cultural” factors in determining party loyalty and political identities.

Our interpretation of these data fits squarely with Thomas Franks’ popular book What’s the Matter with Kansas?, which offered a penetrating journalistic analysis of the changing political cleavages leading up to the 2000 national election, in which the “conservative backlash,” as he called it, led some parts of the Democratic and Independent electorate to vote against their traditional economic interests and align themselves with the neo-conservative cultural themes articulated during the campaign by the Republican Party. Franks used developments in his home state of Kansas and his intimate familiarity with the political history of the region to address this puzzle. He argued that factory-workers in the industrial areas of Kansas rejected their traditional union-based Democratic positions on cultural issues favoring anti-abortion, anti-feminist, and anti-gay rights articulated by the conservative right. Similarly, he argued that in these elections small Kansas farmers aligned themselves with Wall Street, casting their votes in a manner that would eventually push themselves off of their land. Frank generalized his critique of the political landscape of his native state of Kansas to the US election in a manner that provoked the attention of political scientists and others, and his thesis raised the question of whether his “Kansas hypothesis” applies to the nation as a whole. 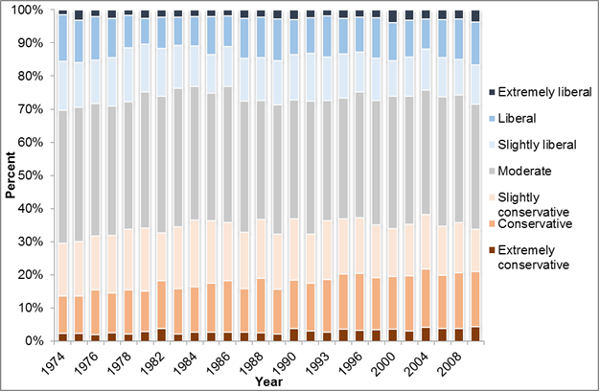 We investigated the extent of polarization in a wide range of measures and its sources in two sets of factors—variables that measure the logic of a “culture war” narrative and those that measure socioeconomic variation, or a narrative of “class warfare.” We suggest that one way to evaluate the extent of political polarization is to look at how individuals identify themselves on a dimension of liberal-conservatism, and how that has changed over time. Figure 1 shows the distribution of political self-ratings on a 7-category liberal-conservative scale from nationally representative surveys of the US (the General Social Survey) from 1974 to 2010. There are a number of different ways to evaluate the extent of polarization in this distribution over time—one is the examination of the dispersion, or spread, of the distribution.  One such measure of dispersion, the sample variance, is plotted over time in Figure 2. By this measure it is clear that polarization in political identities has shown an increase over the past 30 or more years. Another indication of the increasing polarization, shown in Figure 3, is the correlation of the liberal-conservative self-rating shown above with a measure of political partisanship (strength of party identification), which has grown from a correlation in the range of 0.2 in 1974 to 0.5 in 2010. 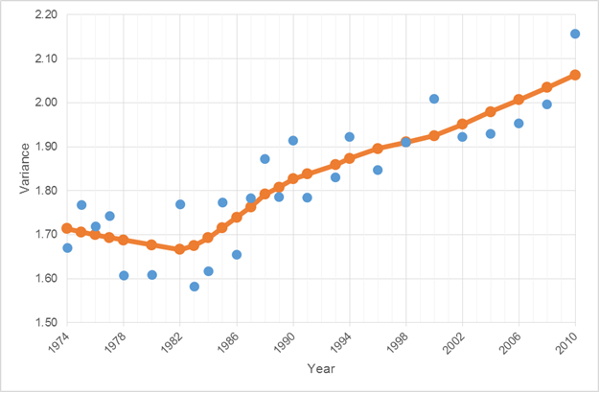 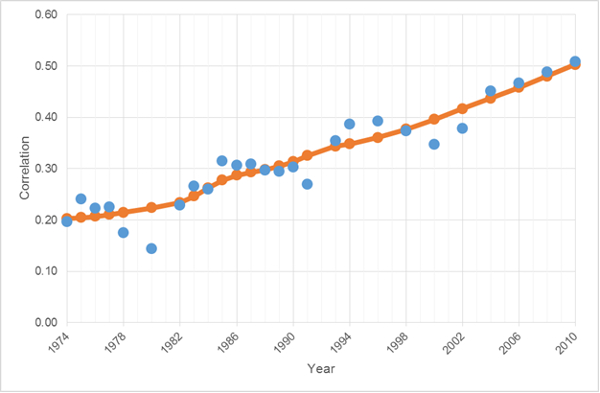 Having established what we believe is evidence for polarization in liberal conservative identities, we asked what might be producing these changes? There is a literature on this topic, too vast to summarize here, but the emerging conclusions are that in national surveys, respondents’ “ideological identities” are increasingly multidimensional, and the cultural component to political identities may be increasing in importance. We framed our examination of this set of issues within the recent literature in sociology and political science in which these ideas are phrased in terms of the “polarization” of the electorate with respect to social and cultural issues. We note that the imagery of a “culture war” is a powerful metaphoric depiction of opposing cultural forces on issues of abortion, gay rights, women’s extra-familial labor force participation, and child-rearing.

We also drew upon the literature in American sociology and political science, which has examined the question of whether there has been a decline in class voting over the latter part of the 20th century, which suggested there has been little change in the extent of class voting. As noted above, we focused on political identities (a seven-point “liberal” to “conservative” self-rating scale) as a measure of “political views,” the main criterion we employ for examining the relative roles of class and culture in political life. In addition to this measure, the General Social Survey furnishes excellent information on detailed occupations, which permits the measurement of occupational class, and a great deal of information on cultural attitudes and beliefs about social and religious issues, namely those dealing with gender, child-rearing, abortion, homosexuality and the orthodoxy of religious beliefs. We relied on these data to examine changes in the contribution of “class” versus “culture” to the prediction of political identities across this time period.

We found that occupational class had a clear and consistent relationship to political views, but we witnessed very little change in the importance of class for determining political views over time. All measures of the cultural component mentioned above are related to political views, and these relationships were somewhat more pronounced than those measuring the linkages to occupational class, and indicate increasing overtime associations between these dimensions and political identities. Specifically, equalitarian gender beliefs, preferences for autonomy in child-rearing values, tolerant attitudes towards abortion, and tolerance towards homosexuals became increasingly associated with liberal political views, while religious orthodoxy became increasingly associated with conservative political views. 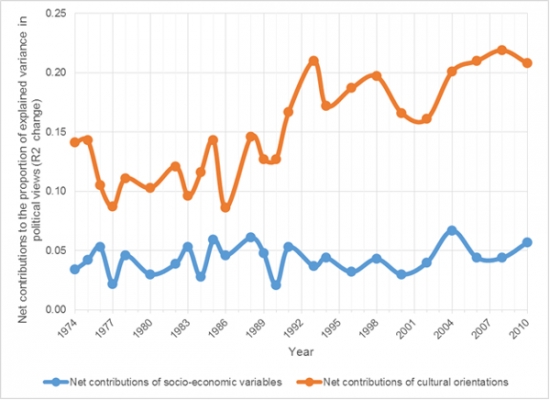 Overall, there is tentative support for Frank’s “Kansas hypothesis” and we find that this phenomenon applies to many political battles waged over the past few decades. This may reflect not only a new political reality, but also a more fundamental social reality concerning the declining influence of socioeconomic factors in political attitudes and behavior, and to an increasing role of the culture war.

This article is based on the paper, ‘The Changing Dynamics of Class and Culture in American Politics’ in The Annals of the American Academy of Political and Social Science.

Duane F. Alwin – Pennsylvania State University
Duane F. Alwin is the inaugural holder of the Tracy Winfree and Ted H. McCourtney Professorship in Sociology, and Director of the Center for Life Course and Longitudinal Studies, College of the Liberal Arts, Pennsylvania State University, University Park, Pa. He is also Emeritus Research Professor at the Survey Research Center, Institute for Social Research, and Emeritus Professor of Sociology, University of Michigan, Ann Arbor. In addition to the study of political attitudes and behavior, his interests include social stratification, family and the life course.