In the US, more than half of prison inmates have some form or a history of mental illness. Scott Akins, Brett Burkhardt and Charles Lanfear write that by concentrating on those with mental health problems who have frequent contacts with police – a group media outlets have termed ‘frequent fliers’ – mental health practitioners can increase their effectiveness. In a case study of arrests in an Oregon county, they use a new method to identify such frequent fliers, and find that those in this group with the smallest gap between arrests make up around 15 percent of all arrests for people in this group, despite being only 5 percent of the total number arrested.

One subset of justice-involved persons with mental illness (PwMIs) pose particular challenges for the justice system. So-called frequent fliers have repetitive and frequent (sometimes very frequent) contacts with police due to their mental illness. These individuals often cycle between jail, halfway houses, hospital emergency rooms, to the streets and back again.  These individuals are critically important to mental health policy, as they represent a core group of people with chronic, untreated mental health need. In an era of reduced funding for mental health services, concentrating efforts on these frequent fliers could provide mental health practitioners with the most bang for their buck.

Frequent fliers are thought to be a relatively small subset of the broader justice-involved PwMI population.  But until now, no one has documented the size of this group with any precision. In new research, we develop a new way to identify frequent fliers, based on the amount of time elapsed between a PwMI’s multiple contacts with police. Using more or less stringent thresholds, the analysis defines several groups of frequent fliers, including rapid cyclers, those with very frequent contacts with police.  Below, we describe the approach and apply it to estimate the size of the frequent flier population in Benton County, Oregon. We find that small but growing group of rapid cycling frequent fliers accounts for a large share of all mental health-related police contacts. These rapid cyclers make up only 5 percent of all individuals with a mental health-related arrest, but they account for roughly 15 percent of all such arrests.

In 2012, heads of local law enforcement in Benton County, Oregon requested a meeting with researchers at Oregon State University to initiate research on the increasing frequency of contact between local officers and PwMI. Police in Benton County have two options when dealing with PwMI, provided that no crime has taken place. Officers may resolve the matter informally with the individual, which results in no arrest or citation. Or they may initiate a Peace Office Custody (POC) hold, which is a type of arrest that occurs because an individual is believed to be a danger to self or others due to mental illness.  A POC is authorized by state statute (ORS 426.228), which directs the officer to take the individual for a psychiatric evaluation at a facility approved by the Oregon Health Authority.  (Of course, if a person has committed a crime, officers may simply arrest the person.)

Increasing Contact between Police and Persons with Mental Illness

Overall, the amount of contact between PwMI and police in Benton County is on the rise. Figure 1 depicts yearly counts of POCs, informal resolutions, and the ratio of POC to non-POC arrests. Informally resolved contacts with PwMI hovered around 200 per year from 2007 to 2010, but they rose abruptly to 300 in 2011. Formal POC arrests were also stable throughout much of the series (below 150 per year). In 2012, the number of POCs jumped to 245. The ratio of POC arrests to all other (non-POC) arrests indicates that POC arrests were increasing faster than non-POC arrests. 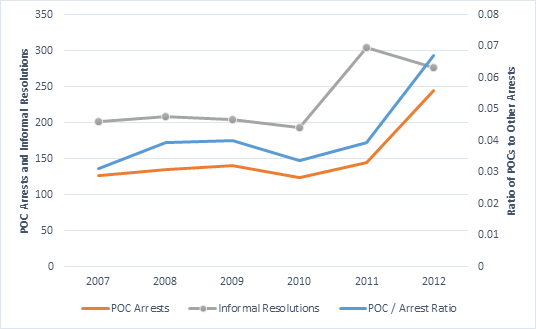 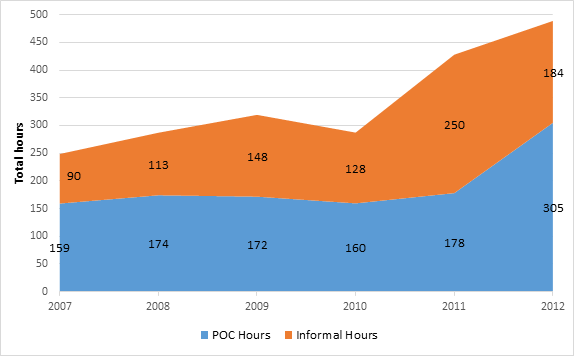 Between 2007 and 2012, 697 individuals received at least one POC. Over these six years, 117 individuals received multiple POCs. These individuals totaled 334 POC arrests for an average of 2.85 POCs per person over six years. Previous work has not explicitly defined frequent fliers beyond saying that they are justice-involved PwMI who have repeat contacts with law enforcement. Using data on the timing of POC arrests, we were able to more precisely define the frequent flier population. For each individual with multiple POC arrests in the data, we calculated an inter-POC span: the length of time elapse between an initial and subsequent POC arrest. These spans are often very short.  Nearly half of all repeat POC arrests occured within 60 days of the initial POC arrest. In fact, over a quarter of repeat POC arrests occurred within just 14 days of the initial POC arrest. 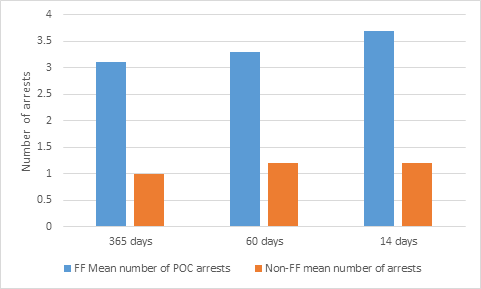 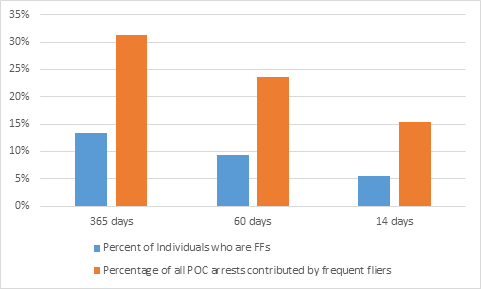 Figure 5 – POC arrests of individuals, by FF status and bandwidth

The criminal justice system is ill-equipped to provide proper treatment for persons with mental illness. Despite this, more and more PwMI are becoming ensnared in the criminal justice system, with law enforcement being the first point of contact in the system. Frequent fliers make up an important part of this population. Their repeated and frequent contacts with police have a variety of consequences. First, they place a significant burden on law enforcement officers, who often feel unprepared to handle situations involving mental illness or mental health crisis. Second, formal POC arrests require immediate psychiatric diagnosis. These often occur in emergency departments of hospitals, which adds to the strain placed on those departments. Third, and most importantly, repeated contact with police is detrimental for the individuals involved, as it increases the likelihood of their penetrating deeper into the criminal justice system. It may also result in tragic consequences related to police use of force, as PwMI are sixteen times more likely than other civilians to be shot by police and 1/3 of all police shootings involve a PwMI.

Identifying frequent fliers promises to be an important tool in mitigating these problems. Our method is a simple yet effective means for police agencies or researchers to estimate the size of this population and to deliver appropriate interventions, ideally in collaboration with mental health service providers or agencies. Although, by default, law enforcement is typically the primary initial responder to these individuals, failure to address the underlying conditions that led to their interactions with law enforcement will waste limited justice system resources and will likely exacerbate the mental health problems of the individual in the process.

To that end, it will be critical to incorporate appropriate mental health services in responding to frequent fliers. A number of approaches have shown promise in improving outcomes for justice-involved PwMIs, including mental health courts, crisis intervention training (or CIT), and specialized co-response teams (in which a mental health professional responds with a police officer at the scene of an incident). Perhaps the most important element is an overarching spirit of collaboration between law enforcement agencies and mental health agencies, which will allow local agencies to craft policies tailored to the specific needs of their jurisdiction. By using the frequent flier identification method described above to prioritize those in the community with the highest need, law enforcement and mental health can collaboratively determine what approaches are most promising for ensuring future mental health and minimizing contact with the criminal justice system.

This article is based on the paper, ‘Law Enforcement Response to “Frequent Fliers”: An Examination of High Frequency Contacts Between Police and Justice-Involved Persons With Mental Illness’, in Criminal Justice Policy Review.

Brett Burkhardt – Oregon State University
Brett C. Burkhardt is an Assistant Professor of Sociology in the School of Public Policy at Oregon State University. He is currently conducting research on the use of private prisons in the United States and has previously written on topics including felon voting rights policies, labor market consequences of felony convictions, and policing.