Yesterday the Empire State held its presidential primary contest for the Republican and Democratic parties, with local billionaire Donald Trump and the state’s former US Senator Hillary Clinton winning the most delegates in the respective GOP and Democratic contests. Susan Orr writes that while in previous years, party nominations have been sewn up by this time; New York’s primary has been competitive for the first time ever this year. Despite its importance this time round, however, New York’s closed primary has made it harder for many to vote, and questions remain over just how representative those who voted are of the electorate as a whole.

April in New York and as always the forecasts have been predictably unpredictable; a slight snow flurry on Monday followed by seventy degrees and sunshine at the weekend. What is unusual this spring is that citizens paid attention to forecasts beyond the weather. In a surprising turn, New York held competitive primaries for both political parties for the first time ever. Such a novel occurrence piqued the attention of citizens, sparked a frenzy of speculation about possible outcomes among pundits in the media, and even drew all the major candidates to a state they generally only visit for fundraisers. This unusual electoral drama was not the boon for civic engagement that it should have been. That is because notwithstanding the “yuge” and “bigly” personalities, the election was debated, and decided, as much by deadlines, delegate divisions and demographics as citizen preferences and issues.

Primaries were introduced as a democratizing Force

Presidential primary elections were introduced in New York and across the US in 1972. The idea was to democratize the presidential candidate selection process in response to the turmoil at the Democratic Convention in ’68. That year party elites wrestled the nomination from the hands of Minnesota Senator Eugene McCarthy and his youth driven grassroots campaign and gave it to the establishment candidate, Vice President Hubert Humphrey. As we know, Humphrey went on to lose the general election to Richard Nixon. While Humphrey’s nomination did not score a victory for Democrats it held out promise for greater “democracy,” as the McGovern Fraser Commission investigating the nomination debacle recommended reforms to empower “ordinary” voters in the nominating process. Ultimately both the Democrat and Republican Parties adopted similar reforms not least because they impacted laws governing elections in many states.

The impact of rules changes that empower “ordinary” voters in selection processes is familiar to British citizens, illustrated as it was by the election of “outsider” Jeremy Corbyn as leader of the Labour Party. New Yorkers by contrast have had few opportunities to directly experience the reformed presidential candidate selection process introduced in ’72. New York does not combine its presidential primary with any other election, thus in some years only one party holds a primary. While the date of the Empire State primary fluctuates, the “retail” politics and state by state style of US presidential primaries almost always means that the plot has played out and the candidacies are settled before New Yorkers have a chance to weigh-in. In 2012, when only the Republican Party held a primary, turnout in the state was a miserable 1.4 percent of eligible voters. In 2008 turnout was a relatively high but still paltry 19 percent of the eligible electorate – boosted by the earlier than usually date and the energy of the Obama versus Clinton showdown (Clinton won). A common sentiment of many Empire State citizens is that their voice is irrelevant in presidential primaries. Most are unaware of how presidential primaries are conducted. While those New Yorkers who are politically engaged are likely more familiar with the candidate selection processes in states such as Iowa and New Hampshire that go early in the primary season than those of their home state.  All this means that the democratic impulse of many New Yorkers to participate meaningfully in this year’s primary was dampened by a confusion of complex rules and deadlines that seem designed to curb their enthusiasm.

In order to participate in the New York primary a citizen has to be registered to vote, and officially affiliated with a political party. In politico speak, New York is a closed primary state with no option for same day registration. On the latter point, the deadline for new registrations in the state was March 25th, a little more than three weeks prior to election day. Numerous studies show that such long lead-times for registration result in lower turnout, especially among demographic groups least civically engaged (young people, Hispanics, Asian and those with limited education).  This rule likely had most impact on the Democratic Race where grumpy septuagenarian Bernie Sanders is seen as “cool” to the millennial generation. The fact that states that permit registration on Election Day have youth (18-19 years) turnout on average 9 percent higher than those that do not has not been lost on his campaign.

The “closed” nature of New York’s primary means that registered voters can only participate in the primary of the party with which they are officially affiliated. Unaffiliated registrants or party affiliates wishing to partake in the other party’s primary had to act with considerable foresight to do so. The deadline to switch party affiliation was October 9th 2015 – six months prior to Election Day. The approximately 3 million voters who remained unaligned with the two major parties were arguably disenfranchised. Again this rule was most significant in the more closely contested Democratic Race where Sanders has been drawing the support of independent voters. Though the Republicans were not unaffected as two of Donald Trump’s children registered as “unaffiliated” were unable to cast a vote for their dad.

Voters in each of New York’s presidential primaries were not directly selecting a nominee; rather they were electing delegates who will select the nominees at the Party Conventions in the summer in Cleveland and Philadelphia. One thing common to each party was that as New York is the third most populous state a substantial proportion of total delegates were at stake in each race. That said the complex division of delegates among candidates differed by party in consequential ways.

On the Republican side, the candidates were competing for 95 delegates, 3 delegates for each Congressional district and 14 “at large” delegates. In each congressional district if the winner received more than 50 percent of the vote, he would take all three votes. If the winner failed to meet the majority threshold, the second place candidate would gain one of the three. The winner of the statewide race would receive the 14 at-large delegates. With pollsters predicting an overwhelming victory for Trump the crucial question up to Election Day was whether Ted Cruz and John Kasich could leverage some delegates by denying him the 50 percent threshold in some congressional districts. This was complicated by the fact that the Republican electorate is not evenly distributed across the state – indeed the number of Republican votes needed per delegate differed across districts by as much as 100 to 1. Thus the ever-strategic Cruz campaigned in districts in the City where Republicans are few, thinking that swaying a handful of voters might make a difference. Ultimately, Trump’s margin of victory was so substantial that at last count he secured at least 89 of his home-state delegates. This increases the chances, but does not ensure, he will receive the 1237 needed to secure the nomination and foreclose a brokered convention.

On the Democratic side, 291 delegates were at stake. The majority of these delegates, 163 were allocated by congressional district. However unlike the Republicans, Democratic delegates were apportioned to congressional districts in accordance with the size of the party’s relative dominance. Districts where Democrats comprised a large proportion of the electorate received 7 delegates, moderately Democratic districts received 6, and districts that are majority Republican received 4. A further 84 delegates were awarded according to the statewide vote; the remaining 44 go to party leaders and remain unpledged. All of the Democratic votes are allocated on a proportional basis. Thus while Clinton was ahead going into the election, Sanders campaigned hard as a good showing as runner up would yield a hearty number of delegates. Thus the election night declarations of a convincing victory for Clinton and her significant margin of victory (58 percent to 42 percent) masks a less lopsided delegate division of 135-104. Another familiar but largely unreported characteristic of the Democratic contest is that Sanders scored victories across the state outside of New York City and the metropolitan areas of Rochester, Buffalo, Syracuse where the population is more diverse. This means that while it is still possible for Sanders to gain a majority of pledged delegates, he would have to secure 60 percent of those remaining to do so. Of course Clinton retains her considerable advantage among “super-delegates” who are unlikely to switch allegiance unless Sanders does so.

As the sun rises on the day after the New York primary – the promise of a decisive voice for New York voters is largely unfulfilled. The primary landscape has been left much as it was before. Each party has a clear and historically unpopular frontrunner. A Clinton victory seems very likely but Sanders has the will and the resources to stick the race out. Republicans appear to be headed for the uncertainty of a brokered convention though the possibility of a Trump victory remains. Either way, the primary process has not empowered “ordinary” voters in definitive ways. While turnout across the nation this primary season has matched record highs of about 30 percent of eligible voters, they remain an unrepresentative minority of the electorate as a whole. While turnout in NY undoubtedly increased, significant numbers of citizens undoubtedly feel disenfranchised by the rules. A further 100,000 Bronx residents appear to have been purged inexplicably from the polls in another US Election Day debacle. Whether all of this is better for democracy than the days when party elites convened to bargain their way to a nominee is up for debate.

Posted In: 2016 Presidential Election | Elections and party politics across the US | Susan Orr 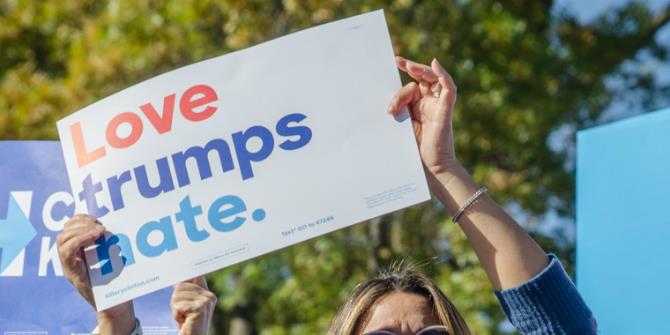 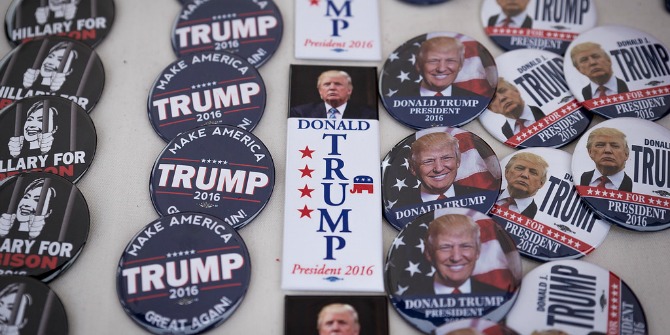 In the face of Trump’s rhetoric of “fear and anger”, 2016 is not likely to be another “hope and vision” election 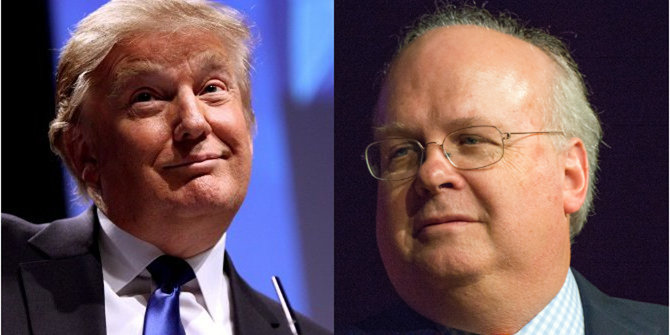 In his attacks on Jeb Bush, Donald Trump has stolen a page from Karl Rove’s playbook. 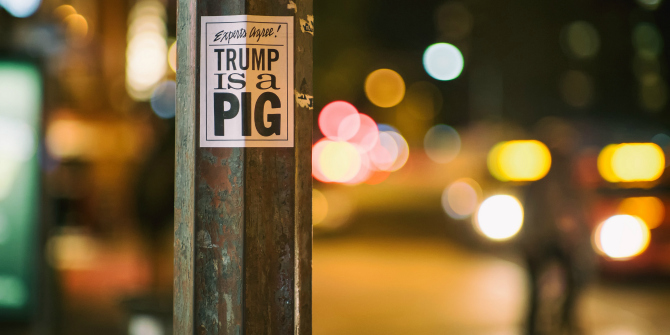