The 2016 presidential race has seen a marked difference between how the candidates are raising money for their campaigns with some, such as Democratic hopeful, Bernie Sanders reliant almost entirely on small donations. But how do donors react to candidates’ changing fortunes in the polls and the media? In a new study which looks at this relationship, Dan Cassino finds that small donors are highly responsive to coverage of candidates on ideological media, and that larger donors respond to network coverage. In addition, while both large and small donors are likely to donate even if coverage is positive or negative, large donors will only do so when their candidate is rising in the polls. Small donors, on the other hand, still contribute to those who are already falling.

In the fourth quarter of last year, more than 2.5 million Americans made campaign contributions, almost all of them small and to the Bernie Sanders campaign. But numbers like this don’t matter as long as these small donors are being less rational than the big donors. Using an analysis of the 2012 Republican primary, it becomes clear that small donors are driven by ideological media –  Fox News on the Republican side – rather than what’s on the more widely viewed network evening news broadcasts, and are paying less attention to which candidates are moving up, and which are moving down.

The data in my study looks at the 265 days between August 5, 2011 and April 25th 2012, when the Republican National Committee declared Mitt Romney the presumptive presidential nominee. The content analysis – human coded, carried out by Media Tenor, Inc – covers all network broadcasts and Fox News over the same period. To examine the relationship between news coverage and contributions, the contributions made to each candidate (the analyses here exclude Romney, whose contributions follow a different pattern) are compared with the media coverage of that candidate on the previous three days, so coverage on Monday, Tuesday and Wednesday is used to predict contributions on Thursday, and so on. Finally, the analysis takes account of both the standing of the candidates in the polls at the time of the contribution, as well as their momentum – measured here by the change in their poll numbers over the previous week.

Big (those who gave $2,500 or more) and small donors (those who gave $200 or less) to Republican candidates in 2012 differ in two important ways. The first has to do with how they respond to coverage of the candidate on Fox News. Small donors are highly responsive to Fox, but don’t seem to respond at all to what’s shown on the evening news broadcasts, while big donors respond to coverage on the networks, and don’t pay much attention to what’s on Fox.

Figure 1 – Effects of Media Statements on Money Raised in Donations of $250 or less for non-Romney 2012 Republican candidates, per day 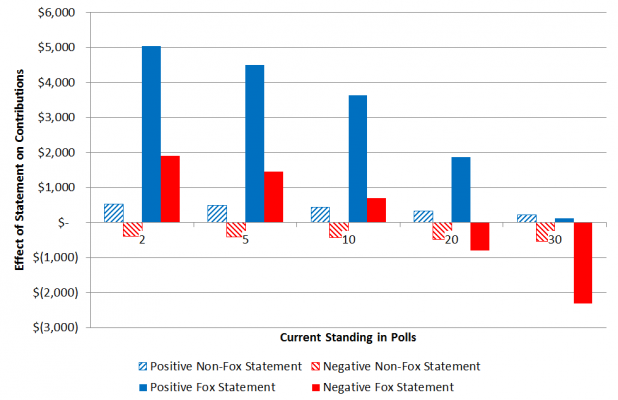 Large donors are much more influenced by the network broadcasts. As Figure 2 illustrates, even the mention of a candidate on the networks – positive or negative – leads to a spike in big contributions for candidates who are low in the polls. The fact that a candidate is getting traction in the mainstream media seems to be serving as a signal to big donors that a dark horse might have a chance. When a candidate is doing well in the polls, big donors actually increase contributions in response to negative coverage on Fox, seemingly trying to shore up a preferred candidate. This pattern is clearest in contributions to the front-runner, Mitt Romney. While negative coverage on Fox or the networks drives down his contributions among small donors, it increases his support among big donors, who are seemingly putting in more money in order to reinforce a preferred candidate.

Figure 2 – Effects of Media Statements on Money Raised in Donations of $2500 or more for non-Romney 2012 Republican candidates, per day 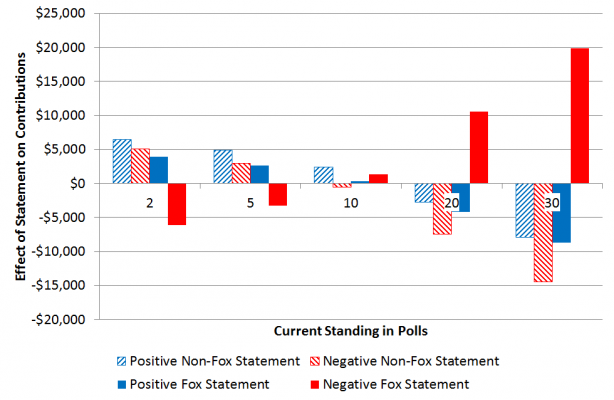 The second big difference is that big donors respond far more rationally to movement in the polls. Donors at all levels give more money to candidates who are doing better in the polls; but while small donors are only responding to how a candidate is doing right now, big donors are also looking at where the polls have been moving. A candidate at twenty percent, for instance, receives far more money from big donors if he’s on the way up, than if he’s on the way down. Small donors, however, treat a candidate who’s fallen from 25 percent to 20 percent in the past week the same as they do one who’s climbed from 15 percent to 20 percent in the same timeframe. Small donors put their money behind candidates who are already falling, while big donors know when to get out.

Of course, any analysis of this sort is hampered by the fact that we simply don’t have access to the contributions made to so-called “dark money” groups, which can accept contributions of unlimited amounts. Campaigns, however, are still reliant on individual direct contributions, something that’s been made clear when candidates like Wisconsin’s Governor Scott Walker and the Governor of Texas, Rick Perry, in the 2016 race dropped out because of a lack of contributions, despite retaining millions in their SuperPACs. The fact that contributions of $2,500 or more only constitute about half the money that candidates receive means that they could be balanced out by the smaller contributors – but not until the small donors start acting rationally.