In new research, Emily M. Wright finds that where women live can have a big influence on how protected they are from intimate partner violence. Using survey data from Chicago women, she finds that social support for women was reduced in areas with higher levels of disadvantage, leading to a greater chance of victimization. While family support was an important protective factor for women, social support from friends actually led to higher frequencies of partner violence. 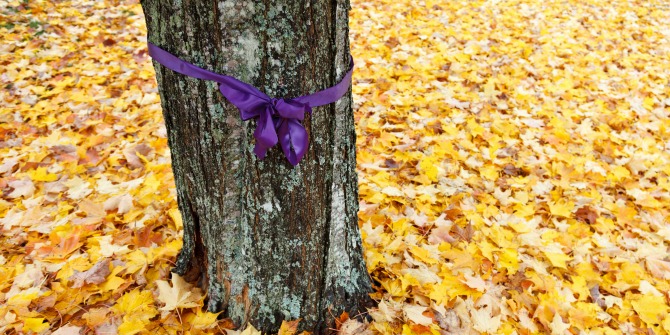 The data from my research comes from the Project on Human Development in Chicago Neighborhoods (PHDCN), which includes more than 4,600 women from 80 neighborhoods in Chicago who reported being in an intimate relationship in the prior year (surveyed from 1994-1997). Information regarding neighborhood disadvantage come from the 1990 U.S. Census, while the women who reported about their IPV victimization were surveyed independently. My analyses examined whether social support from friends and family members influenced women’s likelihood and frequency of intimate partner violence victimization; after these and other individual-level predictors (e.g., age, race, income, education, and cohabitation) were accounted for. I then examined neighborhood disadvantage to determine if the support women received was more or less effective when they lived in disadvantaged neighborhoods versus other types of neighborhoods.

My analyses indicated that effect of social support on IPV appeared to be diminished in more disadvantaged areas. I found that receiving social support from family members was related to a lower likelihood of being victimized by IPV as well as lower frequency levels of victimization. Thus, support from family members was an important protective factor for females. However, I found that social support from friends was related to higher frequencies of partner violence, though it was not related to the prevalence or likelihood of partner violence. In this case, it is possible that to the degree that supporters believe that violence is okay to use in relationships or that it is “none of their business,” the support they offer may not necessarily be helpful to the victim. Most importantly, I found that the effect of social support on IPV was diminished in more disadvantaged areas. When social support functioned as a protective factor against IPV (when it came from family members), its effect was weakened in areas of higher disadvantage, whereas when social support exacerbated violence (when it came from friends), its effect was also weakened in areas of higher disadvantage. My findings suggest that support simply becomes less relevant in disadvantaged areas. These results also contribute to a growing body of research that suggests that neighborhood features moderate the impact of risk and protective factors (e.g., exposure to violence, familial factors, etc.) that have long been associated with victimization, crime, and delinquency.

The family support scale arguably may have included more instrumental types of support while the friends’ support scale may have included more expressive forms of support. My results, then, could suggest that instrumental forms of support (those given primarily by family in this study) may be more important protective factors for women than expressive or emotional forms of support. Additionally, my findings suggest that services for the prevention of and response to IPV, as well as support services for victims of intimate partner violence, should be strategically placed in areas of disadvantage. For instance, domestic violence shelters, counseling services, and services for children exposed to domestic violence should be strategically located in disadvantaged areas. Further, police officers patrolling such areas should understand how to best respond to partner violence and should be knowledgeable about the services available around the neighborhood. Support services, such as centers for legal or financial advice or temporary and affordable housing assistance for victimized women, should also be placed in such locations.

This article is based on the paper, ‘The Relationship Between Social Support and Intimate Partner Violence in Neighborhood Context’, in Crime & Delinquency.

Emily M. Wright – University of Nebraska at Omaha
Emily M. Wright is an associate professor in the School of Criminology and Criminal Justice at the University of Nebraska at Omaha. Her research involves neighborhood context, victimization, exposure to violence, and female offenders. She has received funding from the National Institute of Drug Abuse and the National Institute of Justice for research regarding exposure to violence and victimization among adolescents. She has published over 50 articles and book entries related to these topics.