The rise of Donald Trump has caused many to predict that the Republican Party as we know it is on the verge of self-destruction. But such party realignments are nothing new. In the first in a series of articles on political realignments, Walter Dean Burnham writes that conflicts between the states over slavery and immigration led to the “War of the Whig succession” of the late 1850s and the rise of the Know Nothing Party. What followed was the destabilization of the 2nd Party System, and the creation of the Republican Party.

Since the first half of the 19th century, which saw the democratization of American politics, two major political parties have become embedded institutions in the American state. This has happened against the backdrop of an American socio-economic system, which from very early on – say, 1815 –has been characterized by a number of features. These include the supremacy of the “private sector” over the state apparatus, based on a dominant political culture which stresses individualism, “Liberalism” in the sense of the 19th & 20th century values which are associated with it, as exemplified by Louis Hartz’s The Liberal Tradition in America (1955), the decentralization of politics, and the proliferation of group formation. This final feature was especially important during the “take off” phase, the era of industrialization of the national economy of 1865 – 1914, i.e. the first Gilded Age.

Over the past two centuries, US society has rejected anything approaching the European political response to capitalist development, such as the Marxist/Socialist models of polarizing and escalating conflict between solitary actors in the socioeconomic sphere; the bourgeois versus proletarians. US society has also been deeply affected by the enormously unfettered speed of transformational development. For example, the 19th century saw a transportation revolution featuring railroads, steamboats, and the development of canals. The “completed” picture of cumulative transformations of the US way of life between 1870 and 1940 is brilliantly described and analyzed by Robert J Gordon in the The Rise and Fall of American Growth, especially in Part I: “1870-1940 – The Great Inventions Create a Revolution Inside and Outside the Home.”

But excluded from Gordon’s monumental work is the fact that American’s “permanent revolution” generates waves of losers as well as winners. And the losers quite regularly gravitate to government as they seek redress against what is happening to them. Over time, one could say at the most macro level, the most important and enduring contradiction in the US is the embedded conflict between capitalism and democracy. Given the pervasive hegemony of the “Liberal Tradition in America,” this conflict does not achieve clear visibility as such, but it endures.

As I have long argued, given this macro level state of affairs, the party–defined political “games,” once established, have a strong tendency to be reiterated with minimal changes over a quite long time. After all, the “games” themselves are really complex, and the entrepreneurs running them have little or no incentive to develop policies that accommodate surging popular demand. But the stormy rate of disruptive change in the dominant private sector – from the effects of immigration to a myriad of other developments – generates a gap between the two sectors which grows over time until a general crisis involving the legitimacy of the existing order of things erupts.

Out of the “politics of crisis” at such times, polarization between the major parties escalates and major displacements of existing electoral coalitions occur. The graver the crisis, the more the realignment is a “critical” one. Classic examples center on 1854-1860, 1894-1900, and 1930-40.

At the same time, a striking feature of most political realignments in the US is that they remain institutionally channeled through the major party structures. Large as the displacement of voters and coalitions may be, the phenomenon of “runaway electorates” is largely absent from the scene. Over this and two articles which follow, I will discuss three such ‘runaway electorates’ and political crises. The first is the smashup of the second US party system and the War of the Whig Succession of 1854-1856. The second is the perfect (and perfectly lethal) critical realignment: the rise of the Nazis in late-Weimar-Republic German elections, 1928-1933. Finally, I will examine the “astonishing” rise of Donald Trump in the 2016 Republican nomination process, and of Vermont Senator, Bernie Sanders on the Democratic side. Are these multiple aspects of a critical realignment that began in 2009-2010? 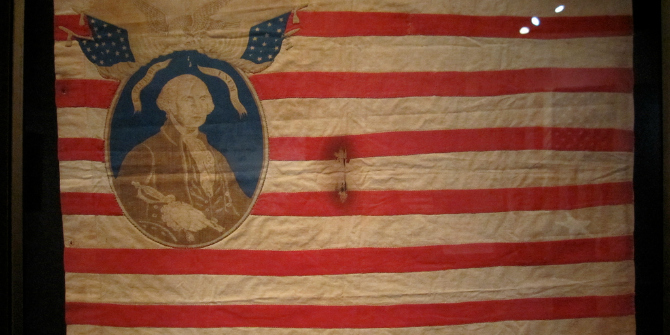 Flag of the Know Nothing Party Credit: Shaun (Flickr, CC-NC-SA-2.0)

This system was fragile and under cumulative pressure along two chief lines: conflicts between free states in the North and West and Southern slave states; and the unprecedented impact of mass immigration. Both became nationally visible in the later 1840s. One key was the destabilizing effect of the Mexican War of 1846-1848. As Ralph Waldo Emerson commented, “Mexico will poison us.” He was right. The basic boundaries between free and slave territories – as well as states – were fixed by the Missouri Compromise of 1820, which was no ordinary piece of legislation but a “final settlement,” a constituent act, which lasted until repealed by the Kansas-Nebraska Act. This Act of 1854 was produced by the large Democratic majority elected in 1852/53.

Its impact in the free states was a classic triggering event. It was a bombshell that blew the unstable equilibrium sky-high.

Meanwhile, another destabilizing vector was the unprecedentedly abrupt impact of mass immigration, particularly of Irish Catholic refugees from the home island’s potato famine (1847 on), and secondarily of political refugees – many Roman Catholics – from the failed revolution of 1848-50 in Germany. In terms of immigrants as a percentage of the resident US population, the 1847-54 surge was the largest in American history – even larger than the 1907-1914 surge from Eastern and Southern Europe. These “newer races,” to use Boston Mayor James M. Curley’s expression, collided with an overwhelmingly protestant population, and at a time of far more intense religiosity than we find in the twenty-first. As a young Cincinnati Whig, Rutherford B. Hayes (later president) put it, “My! People hate Catholics so!”

The anti-Nebraska voters in the North were led by politicians who expected that the anti-slavery extension would sweep all before it. They did not reckon with the eruption of the Know-Nothing (or American) Party. In Massachusetts in particular, this party virtually obliterated all others in the November 1854 election – including the Whigs, who had been dominant for the past two decades. Republicans could not make headway. The Know-Nothings also easily won in 1855 and many politicians thought that they, rather than the Anti-Nebraska movement, would be the major opposition to the Democrats in the 1856 presidential election. As one disappointed Bay State Republican commented in the wake of the 1855 election, “The people will not confront the issues we present. They want a paddy hunt, and on a Paddy hunt they will go!” (p. 223).

Another observer, writing in the wake of the Know-Nothing earthquake of 1854, remarked: “Having become wearied of the follies of what are called ‘leaders,’ the people took the matter into their own hands, and decided the contest in a manner that astounded all, not even excepting themselves.” There seems a strong resonance with the rise of Donald J. Trump (R) and Bernie Sanders (D) in the wild nomination politics of 2016. We will discuss this in a future post.

Critical realignments are rarely launched with such volcanic, immediate force. They take some time – just how long, and how articulated, depends on the particular vortex of political forces at play in each era in which they appear. In the 1854-1861 run-up to the first republican presidential victory, the secession of seven, then eleven states and the outbreak of the Civil War; the Kansas-Nebraska Act had been the explosive trigger. But others had to follow, and they were duly provided by leaders of the hitherto dominant Democratic Party. But what happened initially was the outbreak of the War of the Whig Succession, and the quite difficult birth of the eventual winner, the Republican Party. Along the way, runaway electorates played their own part.