Why do some cities perform so much better than others? According to new research from, Naji P. Makarem, it’s not just down to their resources – both human and physical – but also how people and organizations interact and work together. In studying social relations in business communities, he finds that while San Francisco’s diverse and connected social structure has allowed the Bay Area to withstand new economic challenges, Los Angeles’ comparable regional network has not been able to maintain its connectivity, which has led to relatively poorer economic outcomes for the city.

If I’ve learned anything in the last seven years, it’s that ideas live less in the minds of individuals than in the interaction of communities (Fred Turner, 2006-p.VII)

Economists attribute economic performance – growth in output, employment and wages – to initial factor endowments, such as educated workers, patented inventions, lucrative industries, good infrastructure, property rights and excellent public services. This makes sense to the extent that cities with higher levels of these factors are undoubtedly better equipped to grow their economies and incomes. But if we stop to think how these factor endowments produce economic growth and respond to technological, market and political shocks, challenges and opportunities, the picture becomes more complex, dynamic and social. 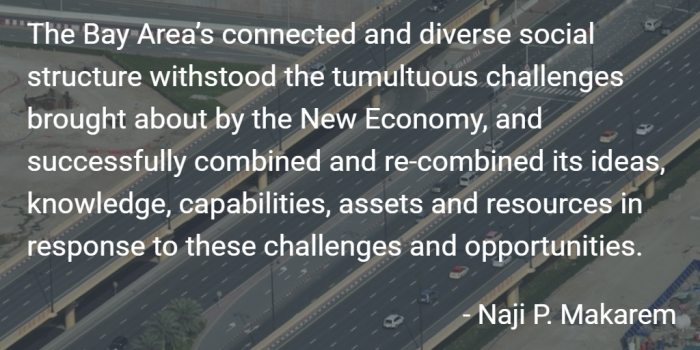 A dynamic perspective reveals how individuals and organizations interact to combine and re-combine ideas, knowledge, capabilities, assets and resources into novel combinations in pursuit of lucrative opportunities. Such interaction and re-combination in response to market challenges and opportunities is enabled and constrained by two intrinsically-linked aspects of institutions: The social networks in which actors are embedded, and their formal and informal ‘rules of the game’. Entrepreneurship and investments in a region emerge from this interaction and re-combination in the face of challenges and opportunities, steering urban industrial structures down specific industrial pathways, with its consequent impact on employment, wages and public revenues.

In a new study, I focus on one of these two institutional aspects of urban economies: The structure of social relations in high-end business communities. The economic sociology literature investigates how entrepreneurial and innovative contexts are associated with more connected, diverse and central social structures. While this has been researched using network analysis techniques at the scale of sub-regional industrial clusters, entrepreneurial communities and small cities, it has never been tested at the scale of large metropolitan regions.

To fill this gap in the literature, directorate research was used as a proxy for the social structure of the business community in two large metropolitan regions, the Bay Area and Southern California, whose per capita incomes diverged significantly between 1980 and 2010 (Table 1). This case selection within the State of California to a great extent controls for differences in formal government institutions, broad-stroke cultural and linguistic attributes, climate and geographic location, infrastructure, amenities and distance from the technological frontier.

My analysis reveals that both networks were almost identical and highly connected back in 1982. Figure 1 below shows that the largest component (a fully connected network of nodes, whereby each node is linked to at least one other node) in both networks included over 50 percent of the 70 sampled firms.

Over the subsequent three decades of economic divergence however, their network structures also diverged. While the Bay Area’s maintained and even increased its level of connectivity, the LA region’s network fragmented by 2010, with a mere 20 percent of firms in its largest component (Figure 2).

Figure 2 – Percentage of sampled firms in largest component, by year, LA Vs SF 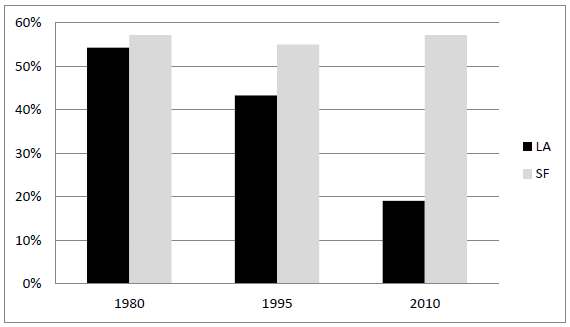 Source: Author‘s calculation, number of interlocked firms in each network‘s largest component as a percentage of all firms in the sample.

Figure 3 shows the two networks in 2010, clearly highlighting the connectivity in the Bay Area (SF) and the fragmentation in Southern California (LA).

Turning to the degree of diversity, the two networks were found to be equally diverse in 1982, however by 2010 while the Bay Area network had maintained its high level of diversity, LA’s had declined substantially, despite having more industries represented in its 2010 network. While the Bay Area’s high-end corporate social structure maintained its high level of connectivity and diversity over the three decades of economic divergence, LA’s became less connected and less diverse.

The analysis of centrality of business-civic associations, whose role it is to represent the needs of the business community, is equally revealing. The results on a broadened network (which included the 50 largest Private Foundations in each region) shows the Bay Area Council in the Bay Area to be the most central organization in the network, with an nBetweeness score of 18 percent (i.e. The Bay Area Council lies on 18 percent of the shortest paths between all node pairs in the largest component). This is three times greater than the LA Chamber of Commerce, the most central business-civic organization in the LA network with an nBetweeness score of 5.86 percent. The Bay Area Council arguably plays the role of an ‘anchor tenant’ within the region’s industrial social structure, connecting business leaders across industrial categories. No comparable business-civic organization exists in LA.

The Bay Area’s connected and diverse social structure withstood the tumultuous challenges brought about by the New Economy, and successfully combined and re-combined its ideas, knowledge, capabilities, assets and resources in response to these challenges and opportunities. It successfully produced new firms and technologies that carved new industrial pathways in IT, biotechnology and supporting services such as venture capital and specialized legal services. The interactions behind such productive recombination were embedded in a connected, diverse and central high-end corporate social structure. LA’s comparable regional network on the other hand was unable to maintain its connectivity and diversity, and failed to productively combine and re-combine regional endowments in the face of a rapidly changing economic reality.

While my study sheds light on the network dimension of regional business institutions, our co-authored book investigates perceptions and world views of various public, private and civic actors, revealing further notable differences. Policy makers and business and civic leaders may draw from this research by focusing attention on the social architecture behind their industrial structures. Business-civic associations in particular may play a central role in bringing influential business leaders from across industries to interact and think about their regional economies and their collective challenges and opportunities.

This article is based on the paper, ‘Social networks and regional economic development: the Los Angeles and Bay Area metropolitan regions, 1980–2010’ in Environment and Planning C Government and Policy.

Naji P. Makarem – University College London
Naji P. Makarem is co-director of the Msc. Urban Economic Development at the Bartlett School’s Development Planning Unit (DPU) at UCL. He is a lecturer in Political Economy of Development and an independent economic development consultant for DFID, the World Bank and other clients, currently conducting research on Nigeria.