Lucrative blockbuster films are rarely directed by African Americans, holding them back in Hollywood

Lucrative blockbuster films are rarely directed by African Americans, holding them back in Hollywood

Since Hollywood first opened its doors to an African American director, Gordon Parks, Sr., nearly fifty years ago in 1969, African Americans have found increasing opportunities to direct films for the film industry’s largest studios. Still this progress in representation does not mean that they are fully integrated into all ranks of directing. Indeed African American directors are routinely underrepresented in the film industry’s most financially lucrative genre, science fiction, and as directors of blockbuster movie franchises.

A close look at the genres of over 1600 films that played in US theaters between 2000 and 2011 reveals that African Americans are virtually absent as directors of sci-fi and blockbuster franchise movies. Four out of every twenty films that whites directed were in the sci-fi/fantasy genre. In stark contrast, less than one out of every twenty films Blacks directed was in the sci-fi/fantasy genre.

Some African Americans defied the odds and found work in the science fiction genre or on blockbuster franchise films: for instance, Tim Story’s Fantastic Four (2005) and Fantastic Four: Rise of the Silver Surfer (2007), Olatunde Osunsanmi’s The Fourth Kind (2009), and Albert and Allen Hughes’s The Book of Eli (2010). Underrepresentation on blockbuster films and in the science fiction genre is the norm; whereas African Americans comprised seven percent of directors, they made up less than two percent of sci-fi film directors. 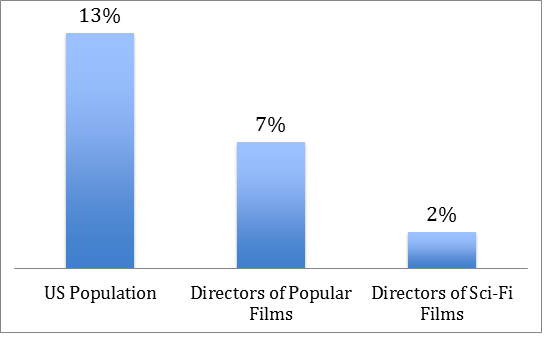 Similar to their marginalization as directors, African American actors are seldom featured in major roles in popular Hollywood sci-fi movies. Actor Laurence Fishburne in The Matrix Trilogy (1999, 2003) and actor/producer Will Smith in I, Robot (2004); Hancock (2008); and After Earth (2013) are notable exceptions.

Representation on sci-fi films is especially important because of their integral position in Hollywood cultural production. Of all genres, science fiction is the most lucrative genre, recording the biggest production budgets, theatrical releases, and box office grosses.

There is significant overlap between the science fiction genre and blockbuster franchise films. Like many sci-fi movies, serial Hollywood blockbuster movie franchises like Batman, Superman, Iron Man, James Bond, and Star Wars are marquee products of the American film industry. Commanding big budgets, wide theatrical releases, and top performances at the global box office, studios are reliant upon these movies for huge profits.

For directors, working on blockbuster movies has great advantages. It allows them to demonstrate their abilities to direct commercially viable films. In fact, directors typically find the most commercial success with franchise movies. Meanwhile, following the success of franchise movies, directors are often given more latitude to direct other projects.

In an industry that generously rewards box office hits, foreclosing participation in lucrative film genres can make it difficult for directors to obtain sizable production budgets on subsequent films, to attain the utmost success at the box office, and to achieve longevity in directing careers. Therefore, underrepresentation on science fiction films and top movie franchises impedes Black directors’ ability to attain the highest levels of economic success in the Hollywood film industry.

As we question what racial integration should look like in the twenty-first century, the Hollywood film industry as a global disseminator of ideas, ideologies, and popular culture remains an important barometer to measure racial inequality in the culture industries. Inclusion in Hollywood cannot only be defined by what proportion of African Americans are working as directors (and in other positions on-camera and off-camera) but also must be defined by the kind of work they are doing.

Due to African American directors’ limited presence on lucrative science fiction and blockbuster franchise films, a prominent obstacle remains in their path to achieving full inclusion and racial equality in Hollywood.  As a consequence of their underrepresentation on science fiction and blockbuster franchise movies, African Americans are denied the success that accompanies directing these lucrative films.

Recently Marvel announced that Ryan Coogler will direct Black Panther (2018), making Coogler the first African American director of any movie from the Marvel Comic Cinematic Universe. In order to progress towards racial equality in Hollywood, more African American directors would need to penetrate this lucrative core of science fiction and blockbuster franchise movies. Doing so would represent a move towards unfettered racial integration for African Americans at all levels of popular film production.

This article is based on the paper, ‘Do African Americans Direct Science Fiction or Blockbuster Franchise Movies? Race, Genre, and Contemporary Hollywood’, in Journal of Black Studies.