The circus of the Republican convention masks an extremely divided party

The circus of the Republican convention masks an extremely divided party

This week sees the Republican National Convention take place in Cleveland, Ohio. Brian Klaas previews the convention, commenting that the ascendancy of Donald Trump means that it takes place against the backdrop of the most divided campaign in nearly 50 years. Establishment Republicans, he writes, now face a choice: either stay home, or become political contortionists and support Donald Trump.

Starting today, a clown car of politicians, retired astronauts, casino owners, wine merchants, pro golfers, and former underwear models will begin to give speeches in support of Donald Trump at the long-awaited Republican National Convention in Cleveland, Ohio. Their fawning praise will finally reach the peak of its crescendo on Thursday night, when Donald Trump’s biggest fan takes the stage: Donald Trump.

In American politics, the national party conventions before a presidential election are always political theater but they usually follow a familiar script. Party leaders fight over coveted speaking roles. Young and rising stars of the party give lofty addresses speaking of a brighter future for America. And with a loud, unified chorus, each state proclaims its support for the party’s nominee as red, white, and blue balloons fall from the sky. Indeed, it was the 2004 Democratic National Convention where the nation and the rest of the world were first introduced to a then-rising star Senator, Barack Obama. He spoke eloquently of the need for an end to the politics of red America and blue America, or black and white America, calling instead for one United States of America.

Yet 2016 is a more divided presidential campaign than any other in modern American history (the 1968 Goldwater campaign being the only other that warrants comparison). And as a result of those divisions, instead of party unity and benign political theater, this year’s convention in Cleveland is likely to be more of a circus, guided by Donald Trump as the ringmaster.

There is a simple reason behind this: Mr. Trump has transcended partisan divides in this campaign by even alienating people who have never voted against a Republican in their life. Many Democrats loathed Mitt Romney in 2012, but they did not fear for American democracy when he spoke. There is a difference between a candidate that takes an ideologically divergent stance from your own and a candidate who doesn’t seem to care enough about facts to form a coherent ideology. Indeed, on the eve of the convention’s grand opening, Donald Trump said this about the attempted coup d’état in Turkey: “So many friends in Turkey. Great people, amazing people. We wish them well. A lot of anguish last night, but hopefully it will all work out.” This is a man who stands a genuine chance of leading NATO in just six months. 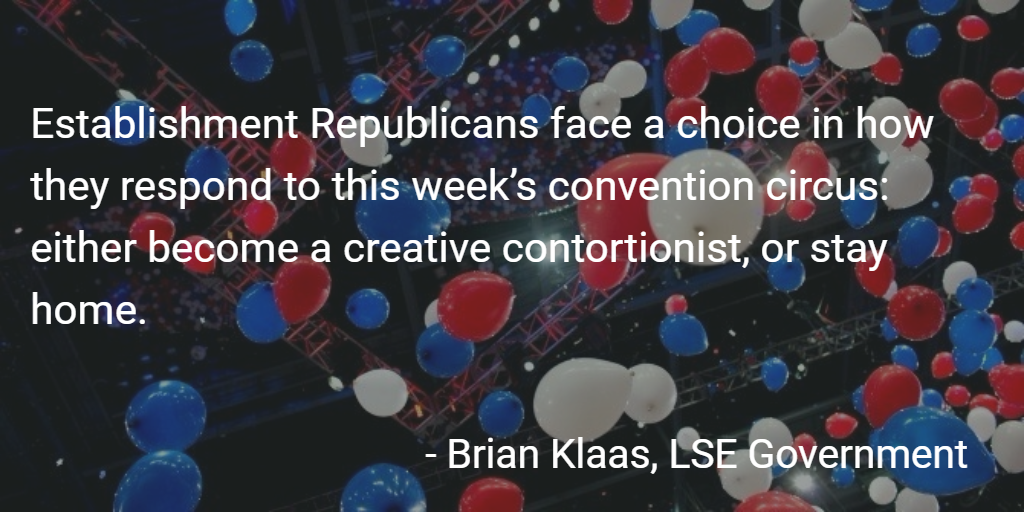 As a result of these statements and similarly clueless or outright offensive ones for the last year, establishment Republicans face a choice in how they respond to this week’s convention circus: either become a creative contortionist, or stay home.

Already, several have come up with eyebrow-raising reasons as to why they cannot attend (or, more accurately, be seen with Mr. Trump). Senator Jeff Flake of Arizona has listed his official reason for non-attendance as a scheduling conflict as he will be “mowing my lawn.” The state’s other GOP Senator, John McCain, who himself accepted the GOP nomination at the 2008 Republican National Convention, is not able to make it because he is going to be trekking the Grand Canyon. And Senator Steve Daines of Montana has an urgent fly-fishing appointment that can’t be rescheduled. (Keep in mind: Republican figures are notified of the Convention dates often at least a year before it is held so that they can clear their schedules, so it isn’t difficult to read between the lines here).

For those that will attend, they are finding new and exciting ways to act as political contortionists. Elected Republicans—especially those in tough re-election fights—have scoured the thesaurus for every possible way of saying that they will vote for Mr. Trump even though they don’t “endorse” him per se. Indeed, even Mr. Trump’s recently unveiled running mate, Indiana Governor Mike Pence, is now going to have to backtrack on a tweet that he sent out long ago when he was not under consideration for the ticket, suggesting that Mr. Trump’s proposal to bar Muslims from entering the United States was “offensive” and “unconstitutional.”

The biggest challenge, perhaps, is for Mr. Trump’s vanquished rival, Senator Ted Cruz—a man who called Trump a con man and got into a vitriolic spat with the presumptive presidential nominee over some particularly nasty tweets that Mr. Trump sent out about Cruz’s wife, Heidi.

Nonetheless, it won’t be the least bit surprising if this week’s convention unveils Donald Trump in a brand new and far more presidential act. The speeches will almost certainly stress party unity (and I’m particularly looking forward to hearing from former underwear model Antonio Sabàto Jr. for his thoughts on support for Republicans). But this is only a job for the illusionist, because the Republican Party is deeply divided and no speeches—not even ones from underwear models—can change that.

By Thursday night, however, Donald Trump will transform from the presumptive Republican nominee into the most divisive standard bearer of a major party to ever appear on a presidential ballot in modern American history. And, according to the polls, he is the most disliked person to ever be in that role. Lucky for him, however, Hillary Clinton is a close second.

Brian Klaas – LSE Government
Dr. Brian Klaas is a Fellow in Comparative Politics at the LSE. He focuses on democracy, global politics, political violence, voting, and elections. He is the author of the forthcoming book: “The Despot’s Accomplice: How the West is Aiding & Abetting the Decline of Democracy.”