Once accepted as part of adolescents’ school experiences, policymakers are now concerned with the causes and effects of bullying on other children and those who bully themselves. Bryan L. Sykes, Alex R. Piquero, and Jason P. Gioviano take a close look at how neighborhood and cumulative disadvantage, as well as participation in needs-based social programs, can work to increase or decrease the risk of bullying among adolescents. Sykes and his colleagues find that adolescents are more likely to bully if they come from families that have difficulty covering the basics, but are not on social program assistance, and that such social programs reduce the chances that blacks and Hispanic adolescents will bully.

Bullying – the repeated exposure of negative actions by one or more individuals over an extended period of time, often entailing imbalances in strength or power – has received increasing attention over recent years. Research shows that nearly 28 percent of sixth to twelfth grade students in the United States have experienced bullying, and approximately 30 percent of young people admit to engaging in one or more forms of this behavior.  Unlike other forms of childhood disadvantage, estimates of self-reported bullying among American minors are near the observed averages for children in other countries.

Externalizing behaviors (where people direct their negative feelings outward) like bullying can have social, psychological, and biological effects that extend beyond childhood for both bullies and their victims. Maltreatment during early stages of life can have lasting emotional effects that lead to substance abuse disorders during adulthood, largely because maltreated and bullied children suffer from mental health disorders, anxiety, and depression. Victims of bullying are also at an increased risk of gun violence, severe assaults, crime, incarceration, and suicidal thoughts.  The consequences of being bullied are so severe that the stress associated with repeat victimization accelerates the aging process in children.

Recently a number of anti-bullying organizations and advocates have announced plans to address different forms of bullying.  For example, during the London 2016 Founders Forum this past June, Prince William, Duke of Cambridge, implored technology companies to address issues of cyberbullying among children.  In doing so, he established a taskforce “to develop a new, positive strategy to combat bullying.” While technological checks on cyberbullying will greatly reduce exposure to negative barrages while online, it is unclear how such advancements will benefit the offline lives and personalities among those being bullied.  Bullying among school peers may be a response to the interpersonal and structural conditions that youth experience, like poverty and inequality, which places children at risk for adverse outcomes as adults.

Social policies aimed at lessening economic hardship affect the prevalence of bullying. In new research, we investigated how neighborhood disadvantage, cumulative disadvantage, and participation in a variety of needs-based social programs worked to accentuate or alleviate the risk of bullying among American adolescents after The Great Recession.  By adapting Elijah Anderson’s concept of a “code of the street” – the adoption of hyper-masculine behaviors that facilitate violence in economically distressed areas – to school-based settings, we assess whether there is a “code of the classroom” among children: bullying and externalizing behavior among school-aged youth that results from the stresses and strains of extreme material hardship.  In doing so, we test whether social programs that mollify poverty and inequality attenuate the risk of bullying, thereby neutralizing classroom codes that are framed around economic resources and material goods.

We reach three main conclusions.  First, bullies are severely disadvantaged.  Not only are bullies more likely to reside in disadvantaged neighborhoods – residential locations that contain a number of disorders and reduced levels of social cohesion – but bullies are also exposed to higher levels of cumulative disadvantage – domestic violence, parental incarceration, and frayed parent-child relationships.  Despite these hardships and disadvantages, the families of bullies are enrolled in more needs-based social programs than families of non-bullies. Yet, adolescents are significantly more likely to bully if they come from families where parents often find it hard to cover the basics like food or housing but are not on any social program assistance.  These means-tested social programs include the State Children’s Health Insurance Program (SCHIP), Supplemental Nutrition Assistance Program (SNAP), the Special Supplemental Nutrition Program for Women, Infants, and Children (WIC), Temporary Assistance for Needy Families (TANF), food stamps, and reduced price lunches. 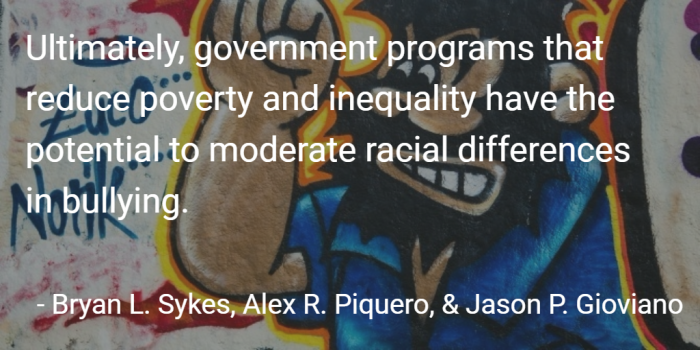 The second finding is that the consequences of economic deprivation for the lives of children are real and have serious implications for furthering educational inequality.    Adolescents are significantly more likely to have a parent contacted by school officials about any problems if they live in homes under constant threat of deprivation but are not enrolled in any social programs.  Furthermore, these youth are more likely to repeat a grade if they reside in disadvantaged neighborhoods or experience cumulative disadvantage.  Social program assistance is critical to youth from homes that experience these forms of material hardship.

The third finding is that social programs that ameliorate economic hardship have the capacity to upend racial differences in bullying.  Overall, Hispanics and non-Hispanic blacks are significantly more likely to bully than non-Hispanic whites, and this finding is particularly salient among adolescents who experience neighborhood and cumulative disadvantage, even after accounting for biases and mechanisms that select youth into disadvantaged communities and families. Yet, when we compared rates of bullying by race among adolescents who were identical in their likelihoods of familial participation in social programs, we found that both black-white and Hispanic-white differences in bullying disappeared.  This is an important finding because racial differences in bullying may reflect the stresses and strains of social disadvantage experienced by adolescents.  Should codes of the street be adopted within classrooms, as a result of neighborhood and cumulative disadvantage, the consequences of such externalizing behaviors like bullying may impede the development and accumulation of human capital at the very moments when adolescents are transitioning to adulthood.

Ultimately, government programs that reduce poverty and inequality have the potential to moderate racial differences in bullying.  This finding is consistent with other research that highlights the potential of government programs to lessen the severe deprivation and material hardship children face as a result of having a parent incarcerated.  While both findings are encouraging, the uneven economic recovery since The Great Recession and a declining social safety net – the $8.6 billion cut in food stamps and reduced funding for TANF – may converge to place youth at risk of greater material hardship and bullying.  As policymakers and technology experts devise methods to prevent cyberbullying, increasing access to and funding for social programs to ameliorate poverty and inequality may be a non-technical solution to prevent bullying, particularly among the most disadvantaged members of our society.

This article is based on the paper, ‘Code of the Classroom? Social Disadvantage and Bullying Among American Adolescents, U.S. 2011-2012’ in Crime & Delinquency.

Bryan L. Sykes – University of California-Irvine
Bryan L. Sykes is an Assistant Professor of Criminology, Law and Society at the University of California-Irvine. His research focuses on demography, mass incarceration, health, research methodology, and social inequality. His work has appeared in The Lancet, the Journal of the American Medical Association (JAMA) Pediatrics, RSF: The Russell Sage Foundation Journal of the Social Sciences, The Annals of the American Academy of Political and Social Science, Injury Prevention, Sociological Forum, and Medicine. He is currently serving as Guest Editor for a special issue of Social Sciences.

Alex R. Piquero – University of Texas at Dallas
Alex R. Piquero is Ashbel Smith Professor of Criminology and Associate Dean for Graduate Programs in the School of Economic, Political and Policy Sciences at the University of Texas at Dallas. His research interests include criminal careers, criminological theory, and quantitative research methods. He has received several research, teaching, and service awards and is Fellow of both the American Society of Criminology and the Academy of Criminal Justice Sciences. In 2014, he received The University of Texas System Regents’ Outstanding Teaching Award.