This week the media’s narrative shifts from Cleveland Ohio, the site of the 2016 Republican National Convention, to Philadelphia, Pennsylvania, where the Democrats are holding their convention. That nominating conventions provide a ‘bump’ in the polls for a party’s candidate is relatively well known – but is there an effect on the states and cities which are holding them? Research from Christopher B. Mann and Joseph E. Uscinski shows that party conventions can swing voters in nearby counties, which can in turn shift the statewide outcome in a close contest. Both parties, they write, get an electoral boost from nearby counties that heavily lean towards them, but can experience a polling backlash in counties which support the other side.

The 2016 Republican Convention in Cleveland is over, and the Democratic National Convention in Philadelphia is just getting underway. The main outcome of these conventions – nominating a presidential candidate – was settled long ago for both parties. Given this, one must wonder what makes the conventions a big deal, and what their effect will be on the election.

The conventions are important because of the attention they get from the media and the public. There is no other moment in the campaign when candidates can break out of the sound-bite coverage of politics to make an extended case directly to the public. The lopsided attention to one party’s candidate does not happen at any other time during the long Presidential campaign. The conventions are essentially weeklong infomercials. Except for the presidential debates in the late fall, the conventions are the biggest campaign events of the general election. Each convention reaches tens of millions of voters, and for many Americans the nominating conventions mark the beginning of the general election campaign.

Political science research indicates the effects of the conventions will be two-fold. The first is the generally well-known and long-established effect on the national contest. The second is the subject of our research on the effects on local voting patterns. Local effects are important in 2016 because both parties chose to hold their conventions in the largest city in crucial 2016 swing states: Ohio for the Republicans and Pennsylvania for the Democrats.

The first and well known effect from the nominating conventions is that each party tends to receive a “bump” in national polls of ranging between five and ten percent, although the size has declined for recent elections. This is a huge change as presidential polls go, and the net result after both conventions usually lasts through the election. The reason for such a large bump is simple: the weeklong uninterrupted coverage allows the candidates to reach people who might not otherwise be paying much attention to politics. In particular, the parties have the opportunity to help their low-information partisans align their candidate choice with their party identification. Also, the conventions give factions within each party the chance to come together, put aside rivalries of the past primary, and coalesce around their nominee. However, both parties’ 2016 conventions are somewhat unusual in highlighting lingering divisions: The media coverage of last week’s Republican convention often focused on the discord between Trump and his foes in the primaries. The early coverage of this week’s Democratic convention highlights the tensions between Clinton and the Sanders/progressive wing of her party.

The second effect of conventions is local. For the cities hosting the conventions, the conventions are a massive and all-consuming event. The intense local atmosphere created by tens of thousands of attendees, millions of dollars in revenue, and increased local media coverage impact local preferences and behavior in a distinct way. For political scientists, the uniquely concentrated one-party experience of hosting a nominating convention makes the effects on voting behavior more easily identifiable than any other campaign event. The local effects of hosting a nominating convention are as close as we are likely to ever come to seeing one-sided communication in a presidential campaign. This makes them interesting in their own right, and as an opportunity to study campaign effects that are often obscured by the two sides engaging in competing or offsetting activity.

And we do mean local effects: specifically, counties in the media market of the hosting city. While the Electoral College makes states the most important unit for counting votes, states are too large a unit to observe local convention effects – particularly large states like Ohio and Pennsylvania with multiple media markets separated by distance and civic rivalry. Nonetheless, Cleveland and Philadelphia are the largest media markets in their respective state, so local electoral shifts are capable of changing the statewide outcome in close elections.

Our research into the local effects of conventions suggests that the parties could help or hurt themselves depending on the city in which they choose to convene. The impact depends on the politics of the surrounding areas. The intense up-close experience of the convention should solidify the preferences of local voters who are predisposed to support the party, persuade some voters who would have otherwise voted for the other party, or create a backlash against the party with voters who support the other party. In other words, we suspect the increased information flow due to being in the convention’s media market impacts low-information and politically disengaged voters who are the most susceptible to campaign stimuli. Therefore, the local effect will depend on the political composition of the area around the convention.

Our research is built on historical averages, but no presidential election is “average” – and so far the 2016 election is anything but that. Moreover, it is difficult to make predictions because the national and local dynamics may diverge considerably in this unusual election year. As we write, the first national polls after the Republican convention are mixed, but suggest a small national gain for Trump. Our analysis indicates Trump is likely to suffer from a significant electoral penalty given the strongly Democratic tilt of the Cleveland media market. However, the local impact on Trump could be positive (or at least less bad) since most observers were surprised by the lack of tumult on the streets of Cleveland, even as national coverage portrayed a difficult week inside the convention hall. Local voters may be happy with Cleveland’s positive turn in the political spotlight (coming in the wake of the city’s recent NBA championship). Similarly, even if the Democrats pull off a well-scripted coronation this week (by no means a certainty) local perceptions in Philadelphia may be shaped by events outside the convention hall or locally relevant events inside the convention hall that go unnoticed nationally. Thus, Clinton may see a different impact around Philadelphia than the positive impact our analysis indicates due to Philadelphia’s blue-and-purple partisan map.

Over the next several weeks, polls of Ohio and Pennsylvania will reveal whether Trump and Clinton should celebrate or regret their respective choices of convention sites. If the election is close in these two hotly contested swing states, the state winner – and consequently the Electoral College victor – may well turn on decisions made by the parties long ago about where to convene, and thus where to concentrate the local voting effects of the nominating convention.

Posted In: 2016 Presidential Election | Christopher B. Mann | Elections and party politics across the US | Joseph E. Uscinski 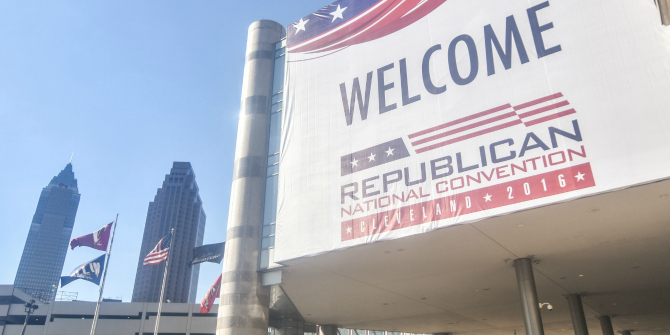