Long inaccessible to ships, as a consequence of global warming, much of the Arctic Ocean is now navigable in the summer months. While the newly ice-free Northern Sea Route cuts the distance of the journey between Northern Europe and Japan by 40 percent, recent research from Haakon-Elizabeth Lindstad and colleagues shows that it may not be more climate-friendly. Assessing the cost, emissions and climate impact of using the Northern Sea Route compared to the Indian Ocean and the Suez Canal, they find that the impact of shipping-related greenhouse gas emissions in the Arctic region counteracts the benefits of the shorter voyage distance and lower fuel consumption.

Although historically inaccessible to ships, global warming has made large parts of the Arctic free of sea-ice during the summer and autumn. For economic and political reasons, freight shipping has therefor begun to utilise shorter shipping routes across Arctic water. One popular route is the Northern Sea Route, which goes from the Atlantic to the Pacific Ocean along the Russian Arctic coast, and reduces the distance of the journey between Northern Europe and Japan by 40 percent. The number of recorded vessels passing through this route has increased drastically, from four in 2010 to 71 in 2013. 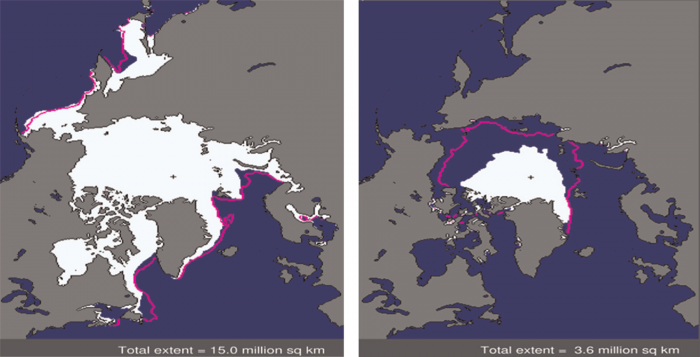 Traditionally, climate assessments of maritime transport focus on CO2 emissions, which implies that with up to 40  percent reduction of distance, Arctic Sea Routes versus trades through Suez or Panama Canal gives lower fuel consumption and hence CO2 emissions (one to one relationship). However, the exhaust gas from ship engines also contains carbon monoxide, sulphur oxides, nitrogen oxides, methane, organic carbon and black carbon — all of which have adverse effects on climate. The impacts of emissions on climate are heavily linked to regional differences in atmosphere, sea ice and solar radiation. The Arctic is particularly sensitive to emissions and prone to large climate impact.

In a recent study by myself and Professor Strømman and Dr. Bright at the Norwegian University of Science and Technology (NTNU) we assessed the cost, emissions and climate impact of using the Northern Sea Route versus trades through Indian Ocean and Suez Canal. The study measured the ‘climate impact’ of each of these emissions via Global Warming Potential (GWP), a metric that expresses emission impact as CO2 equivalents (the impact of each pollutant in terms of the amount of CO2 that would create the same amount of warming).

This is a common method of comparing the contributions to climate change of emissions of different substances. Negative values are given to pollutants that have a cooling effect on the atmosphere, and positive values for those that warm the atmosphere. GWP values were sourced from the IPCC for each of the emission types, for the Arctic and for the rest of the world. The initial study considered three different fuels: light fuel oil (sulphur content 0.5 percent); marine gas oil (sulphur content up to 0.1 percent); and liquid natural gas (sulphur content < 0.01 percent). Emission factors were determined for each of the fuels in grams per kilowatt-hour.

For this article, I found it useful to also include two other fuel options in the assessment, Heavy Fuel Oil (2.7 percent HFO) with a maximum Sulphur content of 3.5 percent and HFO in combination with a sea water sulphur scrubber. This enables continued use of HFO when global restrictions becomes stricter from 2020 or 2025.

Figure 2 – Gram CO2 eq. per kWh at high power as a function of fuel and operational area 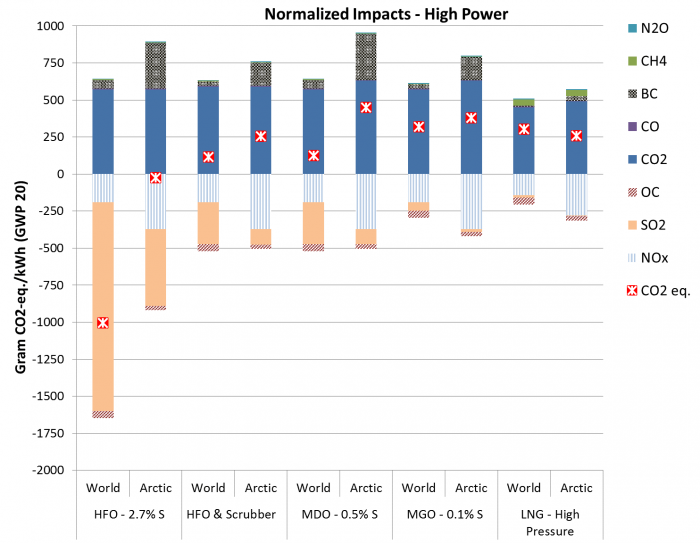 Figure 3 – Gram CO2 eq. per kWh at low of power as a function of fuel, and operational area 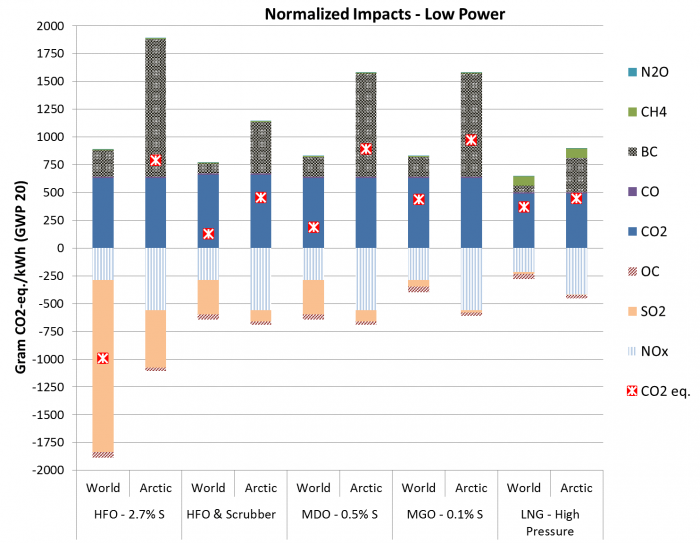 The results indicate the Northern Sea Route has no overall benefits for the climate, even when cleaner fuels are used, as the impact of emissions in the Arctic region counteract the benefits of shorter voyage distance (and lower fuel consumption per voyage). Two other observations can also be made: First that the warming effect of low power operations are much larger in the Artic than in the rest of the world; Second that continued use of HFO-2.7 percent without scrubbers after 2020/2025 will give a significant cooling effect if used at the high seas and in non-Arctic areas.

For policymakers this is a difficult trade-off to make, as the Northern Sea Route also offers significant economic savings.

This article is based on the paper, ‘Economic savings linked to future Arctic shipping trade are at odds with climate change mitigation’ in Transport Policy.