Bike sharing schemes can have a positive impact on nearby house prices.

Bike sharing schemes can have a positive impact on nearby house prices.

Homes and neighborhoods are generally more attractive when they are located close to transport links. Is this also the case for bike sharing schemes? In new research which uses Montreal’s Bixi scheme as a case study, Ahmed El-Geneidy, Dea van Lierop, & Rania Wasfi examine the influence of bike sharing stations on the attractiveness of nearby housing. They find that a home which has 12 stations within 800 meters can be expected to sell for nearly 3 percent more compared to those which have no nearby bike sharing stations. They also find that bike sharing stations give municipalities the opportunity to profit from higher property taxes.

The decision to rent or buy a home is one that most adults go through several times in their life. It is a choice that is bounded by complex preferences and restrictions. Restrictions can be related to the affordability to reside in certain units or to the space needed due to family size. Preferences can be related to the amenities available in the home or in the neighborhood where it is located. Some people might pay more for certain amenities either in the home or in the neighborhood, or they might pay less due to the presence of a problem or source of discomfort nearby. Research has shown that access to different transport alternatives around a home is considered to be an influential factor in determining housing prices. Individuals do pay a premium to have access to a variety of transport options, especially transport services that provides a better access to opportunities in a region. For example being near a new high quality light rail station is expected to have a positive impact on home and land values even right after the announcement of station location and prior to the construction. 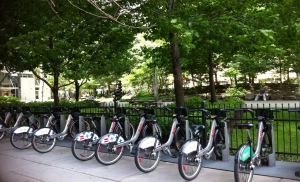 Bicycle sharing systems provide users with a sustainable mode of access to opportunities in a region; accordingly it is expected to have an impact on home values in areas where they are operating. Quantifying these impacts in regions where these systems are running can give better insights for policy makers of some of the indirect benefits that can be derived from bicycle sharing systems. 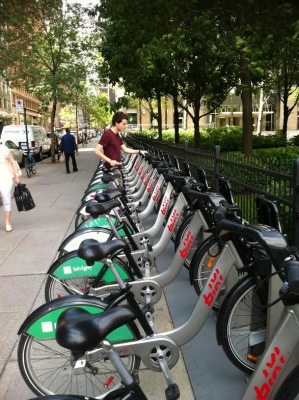 Our recent study based in Montreal Canada has looked at the relation between the bicycle sharing system operating in Montreal (Bixi) and home sale prices. Our study used multiple sales for units in multifamily housing that were reported in the Multiple Listings Service (MLS) of Montreal between 1996 and 2012. To control for changes in the housing market, we used sales conducted in neighbourhoods where bicycle sharing does and does not operate. Using only repeated sales gave the opportunity to control for many of the variations in housing prices. This meant we were able to estimate the impacts of bicycle sharing systems on sale prices of units in multifamily housing.

Our analyses found a statistically significant impact of the presence of bicycle sharing systems on sale values of units in multifamily housing; on average, a home that has 12 stations within its vicinity (800 meters) is expected to sell at a value of 2.7 percent more when compared to the same unit with no bicycle sharing stations nearby. Accordingly bicycle sharing coverage will not only benefit the residents locating in these areas, but also act as an opportunity for municipalities to profit from higher property taxes.

Like many changes in urban form, increasing the availability of bicycle share stations will have benefits both nearby and further away. The immediate economic benefits stem from increases in municipal property taxes. However, it must be acknowledged that increasing the coverage of a bicycle sharing system or the number of station in an area will come at a cost. Cities that are considering the implementation or expansion of bicycle share systems must recognize that although seed capital can be high, increases in property taxes near bicycle sharing facilities might out weight the initial costs.

This article is based on the paper, ‘Do people value bicycle sharing? A multilevel longitudinal analysis capturing the impact of bicycle sharing on residential sales in Montreal, Canada’, in Transport Policy.