Strategic manipulation of district boundaries dilutes the Black vote and threatens the existence of White Democrats in Southern politics.

Strategic manipulation of district boundaries dilutes the Black vote and threatens the existence of White Democrats in Southern politics.

More than 50 years ago, the Voting Rights Act allowed for the creation of “majority-minority” districts in order to tackle racial gerrymandering in the South. In new research which focuses on South Carolina, Damion Waymer finds that while some of these Congressional districts have been drawn in a way which increases Black representation, still others are done so with the opposite effect. In addition, gerrymandering in South Carolina has also led to the almost complete marginalization of White Democrats in the state.

A landmark piece of legislation signed during the tumultuous Civil Rights era in US history, the 1965 Voting Rights Act prohibits racial discrimination in voting. One key piece of that legislation allows for the creation of “majority-minority” districts. The aim of “majority-minority” districts is to avoid or remedy the drawing of redistricting plans that diminish the ability of a racial or language minority to elect its candidates of choice. This act was significant, especially in the Deep South, because it was argued that Whites (who constitute a majority of the population there) would never willfully elect a Black person into office.

This well-intended legal intervention sought to use gerrymandering to combat racial inequality and discrimination in the Deep South. Gerrymandering refers to a practice in politics that seeks political advantage for a particular party or group by manipulating district boundaries to create partisan advantaged districts. What we are experiencing today, however, is a two-fold irony as the result of gerrymandering.

Just having two out of seven Blacks in the House of Representatives does not address the challenge of disproportional representation because if the Black were a Republican, she or he might fit the bill in terms of racial categorization but would not represent the ideological or political interests of the vast majority of Blacks in the state because most Blacks in South Carolina support the Democratic party. According to Jackson:

President Lyndon B. Johnson pushed through the landmark Civil Rights Act of 1964 (outlawing segregation in public places) and his eventual Republican opponent, Sen. Barry Goldwater, opposed it. Johnson got 94 percent of the black vote that year, still a record for any presidential election. The following year Johnson signed the 1965 Voting Rights Act. No Republican presidential candidate has gotten more than 15 percent of the black vote since.

So, in the Southern United States, blacks are disproportionally represented—both racially and politically

Using South Carolina for the example once more, here is a view of the state’s most recent congressional map. 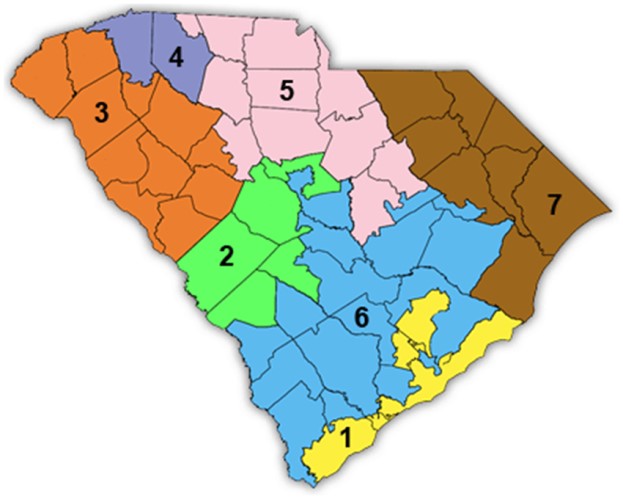 Here the state is divided into counties and its natural geographical boundaries. What we see is the counties with the largest black populations (Richland and Charleston) have been gerrymandered to place large portions of both counties into the 6th Congressional District. 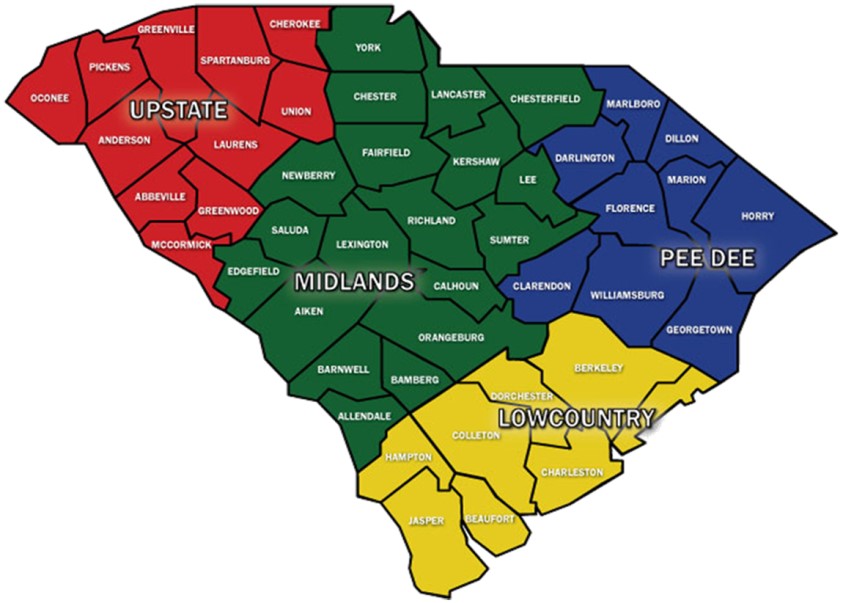 If we consider the 2014 election results we see that in District 6, the Black Democratic candidate, incumbent Jim Clyburn, won with nearly 73 percent (125,172 votes) of the overall votes for his district. His closest competitor was awarded a bit more than 25 percent (43,658) of the overall votes for the district. Proponents of majority-minority districts would say that this is positive proof that the democratizing process works. A political map was drawn in the sixth district to ensure that Black South Carolinians would have the opportunity to elect the candidate of their choice. However, closer scrutiny of the election results—particularly in the Fifth district—and the gerrymandered maps highlight how the process can actually, paradoxically, dilute the voting power of Blacks. If the lines were redrawn, it is conceivable that a second Democratic candidate could be have been elected.

A closer look a Figure 1 reveals how one portion of Richland County (in the middle of the state and clearly gerrymandered is aligned with District 6, and the other portion is aligned with District 2 (an overwhelmingly majority White district). Richland County is the home of the capitol city, Columbia, South Carolina, and has a population of nearly 400,000 people—45 percent of which are Black; thus, positioning and pairing a large portion of that county with District 2 effectively diminishes the voting power of a large portion of the state’s Black citizens.

According to Nate Cohn of The New York Times, “The demise of the Southern Democrats now puts the party at a distinct structural disadvantage in Congress, particularly in the House. The young, nonwhite and urban voters who have allowed Democrats to win in presidential elections are inefficiently concentrated in dense urban areas, where they are naturally drawn into overwhelmingly Democratic districts by congressional mapmakers.”

White Democrats in the state of South Carolina are almost completely marginalized by gerrymandering. For example, the current senior leadership of the South Carolina Democratic Party, which includes a chair, first vice chair, second vice chair, and third vice chair, is made up of two Black persons and two White persons. Yet, only one district in the state currently has a Democratic representative. That district is the result of gerrymandering to create a majority-minority district (District 6, see Figure 1).

By advocating for the upholding of the majority-minority districts, Republican Party leadership can use gerrymandering to place White Democrats into congressionally Black (majority-minority) districts. By doing so, they can effectively lessen the power of the Democratic voice overall and severely dampen the voice of White Southern Democrats. One implication is that Southern Democrats may need to argue that ideological/political misrepresentation is of equal or possibly greater importance in the South than accurate racial representation alone.

This article is based on the paper, ‘Black Voter Dilution, American Exceptionalism, and Racial Gerrymandering: The Paradox of the Positive in Political Public Relations’, in the Journal of Black Studies.

Damion Waymer – University of Cincinnati
Damion Waymer is a professor of Communication at the University of Cincinnati where he also serves as the associate provost for Faculty Development and Diversity. His research projects address fundamental concerns about issues of power, race, class, and gender, specifically, and how these social constructions shape and influence the ways that various stakeholders receive, react, and respond to certain messages. He has published extensively in the areas of organizational discourse/rhetoric, public relations, issues management, and media diversity.