Having an informed electorate is traditionally considered a necessary prerequisite for realizing participatory democracy, as this enables voters to make meaningful choices about who they elect and to hold officials accountable for their actions. But do more informed electorates lead to more favorable policy outcomes? In new research which uses state-level data, William P. Jaeger, Jeffrey Lyons, and Jennifer Wolak find that the strength of the correlation between voter ideology and policy outcomes does indeed increase as the electorate’s knowledge rises. They suggest that state elected officials are particularly responsive to well-informed electorates whilst in office.

Knowledge has been argued to be a form of political power, where citizens rely on their knowledge of public affairs to monitor elected officials and hold them accountable for their decisions.  When Americans lack basic knowledge about current events, it becomes much more difficult to ensure that political outcomes align with the public interest.

While we often assert that a politically-informed electorate is essential to a well-functioning democracy, we have not yet had much evidence to confirm that informed electorates are any more successful at securing more representative political outcomes.  In fact, we often find a high degree of correspondence between public preferences and policy outcomes even given evidence that Americans are uninformed about many aspects of politics and current events.

We believe that political knowledge helps promote policy representation in the aggregate.  We demonstrate this by explaining differences in the quality of policy representation across the fifty states.  Each state varies in the degree to which policy outcomes align with the ideological preferences of state constituents.  Some states show close alignment between the liberalism of the electorate and the ideological tenor of policy outcomes, while in other states the correlation is lower.

We explore the degree to which these differences can be explained by the level of political knowledge held by each state’s electorate.  While very few surveys ask people about their specific knowledge of matters of state politics, we are able to create two measures to approximate the collective political knowledge of the state electorate.  The first summarizes the percent of the state that can name their governor, while the second set of measures reflects knowledge of partisan control of the governor’s office and state legislature.

Figure 1 – Estimates of state knowledge of name of Governor 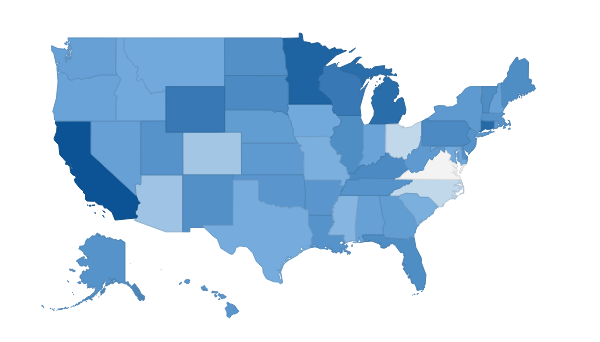 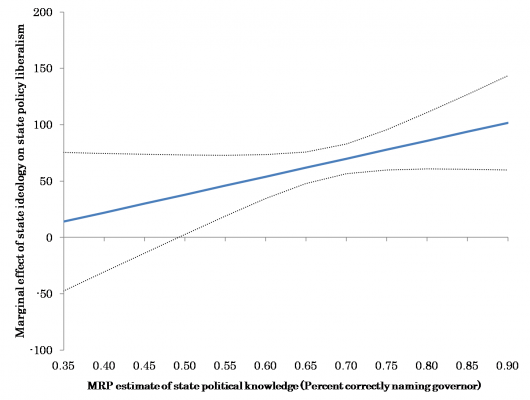 While we might worry that these effects are driven by the attributes of well-known governors, we find a similar pattern when considering variations in policy congruence across the states as a function of people’s knowledge of the partisan control of state government. 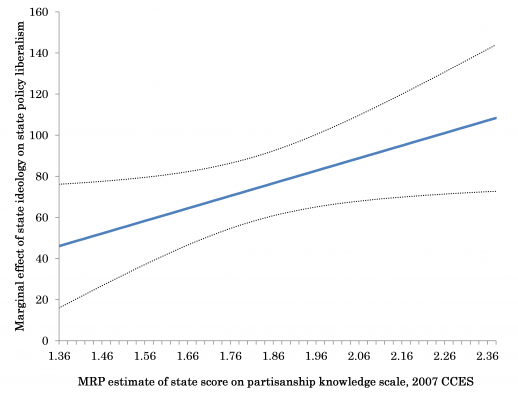 When citizens are well informed about politics, they are more successful at securing policies that align with their ideologies.  While it may be that those with greater political knowledge are more successful at selecting congruent candidates at the ballot box, our evidence suggests that the effects of political knowledge are not through elections alone.  Even controlling for election outcomes and the composition of the state legislature, we see that knowledge still plays an important role in promoting a connection between state preferences and state outcomes.  This suggests that state elected officials are particularly responsive to well-informed electorates during their tenure in office.

When knowledge of state politics is low, uninformed electorates are in peril of getting unrepresentative outcomes.  As state electorates become more informed about state politics, the importance of citizen preferences to determining policy outcomes increases.  We know that political knowledge can be useful to individual voters – making it easier to choose desirable candidates, become politically engaged, and keep up with current events.  We demonstrate here that political knowledge also benefits the collective.  As people become increasingly well-informed about state politics, they are more likely to secure policy outcomes that align with the will of the public.

This article is based on the paper, ‘Political Knowledge and Policy Representation in the States’, in American Politics Research.