Despite winning the popular vote, Democrat Hillary Clinton lost the presidential election to Republican candidate Donald Trump. This was made possible by America’s unusual method of picking a president, namely through its “Electoral College” system – which as Thomas J. Leeper argues, has serious consequences for the strength of Trump’s mandate and could reignite debate over electoral reform in the United States.

The United States is often described as exceptional. There is no feature of American elections more exceptional, more unique, and more vexing than the Electoral College. For the second time in recent memory, the majority of the American voting public have voted for a candidate who will not be their President. This necessarily limits the capacity of the president-elect to claim a mandate and should serve as a reminder that American government deviates substantially from the democratic ideal.

Almost no polling during the 2016 presidential election predicted a Trump victory. Indeed, forecasting models from FiveThirtyEight, YouGov, PredictWise, Upshot, Huffington Post Pollster, RealClearPolitics, among others, all predicted a Clinton victory in the popular vote and in the state-by-state Electoral College. While the next four years will see Donald Trump in the White House, the forecasters were right to see Clinton pull ahead in popular support.

The final votes are still being tallied, but as of this writing, Clinton is ahead nationwide by more than 150,000 votes, making it the fifth time in American history that the Presidency goes to a losing candidate and the second time in the last five elections that this has occurred. The last time, Al Gore defeated George Bush in the 2000 popular vote, but the election was ultimately decided indirectly by the United States Supreme Court in the controversial case Bush v. Gore.

The Electoral College system awards votes on a state level, with each state carrying a number of votes determined by its population but no less than 3. The formula is based on Congressional apportionment, with each state receiving two Electoral College votes (one for each of its Senators) and one additional vote for each member of Congress for the state (currently ranging from 1 to 53). In every state but Nebraska and Maine, all of the state’s electoral votes go to that state’s popular vote winner. 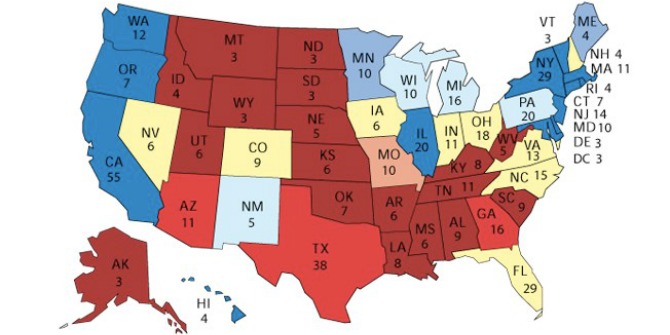 The system was envisaged by the American Founders as a means to both filter public sentiment through a system of hopefully more competent electors and also introduce a check on Congressional power as an alternative to Westminster-style, closed-room leadership elections.

If you reside in California, for example, there is one Electoral College vote for every 600,000 people. In Wyoming, it is one vote per every 200,000. Each citizen’s vote matters three times more in Wyoming than in does in California.

It also means that if a state is a solid “red” or “blue” state (again, California and Wyoming being good examples), then the votes of those on the majority side matter very little at all. A candidate only needs to win 50% + 1 of the votes in a state to carry all of the state’s Electoral College votes. Hillary Clinton is likely to win over 65% of the vote in California but most of these votes do not matter per se. To put that in perspective, the California result will leave Trump with about 3 million votes and Clinton with about 5.5 million. The 2.5 million additional votes add up to more than the combined populations of the four smallest states (Wyoming, Vermont, North Dakota, and Alaska), but do nothing to impact who is selected as President.

And as rural, less populous states have increasingly voted for Republican candidates, the Democratic Party has been placed at a structural disadvantage in Presidential elections. The result is what we are seeing this year – with Clinton winning the popular vote but conceding the office to her opponent. By filtering the public’s votes into state-by-state races, the Electoral College introduces immense disproportionality into the electoral system, allowing small states to carry more weight than their population size merits.

The implications of this are at least two-fold. First, this year’s result will hopefully energize support for reform of the Electoral College. Direct election of the President is an obvious shift toward increased democratic accountability and the Founders’ distrust of the public never fully made sense. Reform, however, is unlikely given that it would require a consitutional amendment that must pass the Republican-controlled Congress and the majority of states, many of which would lose their disproportionately large influence through any reform measure. A simpler measure, the “National Popular Vote Interstate Compact” would only require the support of state legislatures to remove the disconnect between the popular and Electoral College votes. Ten states and the District of Columbia have signed on so far.

It also raises important challenges for the legitimacy of the incoming administration. While the Electoral College result must be accepted and Clinton has rightly conceded the race, it means that the President-elect will have to constantly recognize that it exists as a minority government. Even with a unified government – Republicans will control the Senate, Congress, and the White House – Trump’s election is an institutional artifact, carried over from concerns of 18th century thinkers.

In Trump’s concession speech, he promised to be a President for all the people. He will have to remember to keep that promise, especially to the majority of voters who preferred his opponent.

Thomas J. Leeper – LSE Government Department
Thomas Leeper is an Assistant Professor in Political Behaviour in the Department of Government at the LSE. His research on individuals’ public opinions primarily focuses on the role of information in politics. He is particularly interested in how mass attitudes reflect an interaction between the broader information environment – including the mass media and political elites – and individual-level attributes – namely citizens’ expressed behaviors, psychological traits, prior knowledge and opinions, motivation, and affect. He tweets @thosjleeper