Recent weeks have seen president-elect Donald Trump begin to select cabinet appointments for his administration. Looking at Trump’s likely picks for positions concerned with foreign policy, Harry C. Blaney III argues that many of those that he is considering are either unqualified or would lead to serious damage to the country if they were appointed.

Perhaps the greatest indicator of what will happen in any given administration is the people that are picked for the top posts. I have watched this for many decades for both Democratic and Republican administrations and their choices, like the canaries in the coal mine, tell you what to expect and what to fear. This is especially the case in the foreign and national security area as the consequences can be catastrophic rather quickly and can make for disastrous long-term trends. It tells us also how Trump intends to govern, or is it rule?

Bad choices often have a very high price in such areas as climate change, conflicts in the Middle East, dealing with our allies, and working with Russia and China, as well as dealing with nuclear weapons and getting our critical intelligence right and not politicized.

But the names that have so far emerged have shown a dangerous trend. It is not unlike the naming of Stephen Bannon as Counselor to the President and chief strategist and essentially policy co-equal to the White House Chief-of-Staff.  In his case we have next to the president’s office a racist, bigoted and alt-right Breitbart News head which has spewed the media and our citizens with hate for just about every minority and group one can conjure up. The exception is the KKK, which endorsed Trump and rejoices in the lifting up of Bannon as one its own. That act alone has cost us greatly in every decent nation and with citizens around the world that prize decency towards all and the worth of every human being.  It has given inspiration to every fascist group and dictator around the world and at home. That one appointment alone says much of what the new administration will be like.

Just so is the case with the national security and foreign policy choices that have for some appointments come out of Trump Tower. Here are the latest developments for the key foreign and national security posts: They are all critical positions of importance like Secretary of State, the Secretary of Defense, the heads of the intelligence agencies, and the National Security Advisor to the President, who heads the National Security Council. We need to remember that for the Chiefs-of-Staff of the Armed Forces Trump gets to have the last say on appointments.

The position of Secretary of State is a critical position as John Kerry has already demonstrated in his unbelievable efforts to act as peacemaker, peacekeeper and “Crisis Manager In-Chief”. The current crop of “likely suspects” has already been bantered around by leaks and media speculation. For the Department of State such names as Rudy Giuliani, John Bolton, and perhaps a more responsible individual Stephen Hadley, a former George W. Bush national security adviser, who unlike some other Bush types abstained from criticizing Trump during the campaign.

Now the speculation has widened by leaks from Trump’s headquarters. Here is a short look at this long and rather bizarre list:

With regard to Bolton, a former Ambassador to the United Nations, who has a not very favorable reputation among many foreign affairs professionals and is known to be difficult to work with. He is the “macro” war hawk and hates almost all global international organizations especially the United Nations.  Senator Rand Paul opposes both Bolton and Giuliani, with regard to Bolton in an editorial he wrote: “Bolton is a long-time member of the failed Washington elite that Trump voted to oppose, hell-bent on repeating virtually every foreign policy mistake the US has made in the last 15 years.”

The other candidates according to the New York Times are: Senator from Tennessee and chairman of the Senate Foreign Relations Committee Bob Corker, who has many strange ideas about foreign affairs and has been very partisan.

In the list is former New York mayor Rudolph W. Giuliani, who campaign officials said last Tuesday is the leading contender for the job but has been a an attack dog for Trump during the campaign and has been roundly criticised by many for his outlandish statements and campaign hate speech.

What can be said of the above group is that only Khalilzad and McChrystal have any relevant experience but each have serious faults and problems of their own, and the rest are utterly the worst possible candidates for this demanding job I have seen in 50 years of studying State secretaries or 25 years of working with them as a Member of their Policy Planning Staff and a Foreign Service Officer. They are a kind of joke and likely a disaster in any high foreign affairs position.

As for Gingrich, other than being a virulent extreme Trump pawn, he is as emotionally, morally, and in terms of wisdom in foreign affairs as unfit for any high office as one can think of and especially the Secretary of State. He has now taken his name off the list and seeks at the moment to merely be an outside advisor. 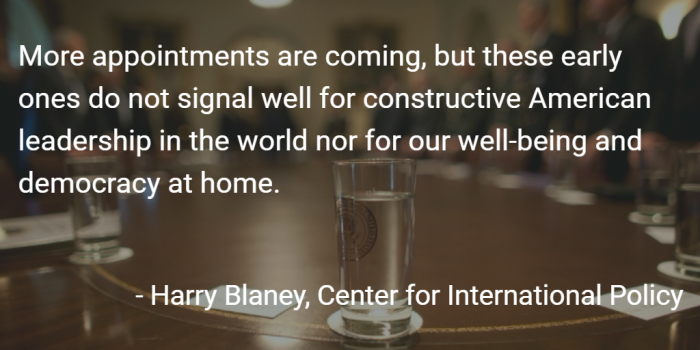 For the position of National Security Advisor Lt. General Michael T. Flynn is to be the pick.  He is a man much disliked and mistrusted in national security circles both Democrat and Republican and whose hawkish stances include views that the highest risk to America is “Islamist militancy” and according to a New York Times article will revive George W. Bush’s global war against terrorism. He also has many conflicts of interest due to his financial connection to such authoritarian regime as Turkey where he, while working with Trump, lobbied for the extradition of a political opponent of Turkey’s president.

For the Department of Defense one option that has been suggested is 39 year old Arkansas Senator Tom Cotton, who saw combat in Iraq and Afghanistan as an Army infantry officer and serves on the Armed Services Committee and the select committee on intelligence of the Senate.  Stephen Hadley, national security adviser under George W. Bush is now also thought to be a possible candidate, but some sources have ruled him out.

Duncan D. Hunter has also been named as possible for Defense Secretary. He is a Representative from California, a former Marine Officer who served in Iraq and Afghanistan, just 39 years old, serves on Armed Services Committee, and was among the first two Members of the House to endorse Trump.

Jon Kyl, former Senator from Arizona with a far right reputation, has also been named as a possible pick and former Senator from Missouri Jim Talent, has been cited in the press as another. Finally and not least, James N. Mattis, Retired Marine Corps general and former commander of United States Central Command has risen in the ranks for possible nomination.

Rep. Mike Pompeo, has been chosen for the job of Director of the Central Intelligence Agency (CIA). He is on the House Permanent Select Committee on Intelligence and United States House Select Committee on Events Surrounding the Twenty Twelve Terrorist Attack in Benghazi. In that role he as been among the most wild partisan attack dogs against Hillary Clinton, ignoring almost all official reports that she was not to blame for the Benghazi events.

For the position of Director of National Intelligence (DNI), who overseas all of the intelligence agencies, National Security Agency Director Admiral Mike Rogers is the leading candidate. Rogers met with Trump on Thursday and his transition team on Friday. Rudy Giuliani is also being considered for DNI, where he would be just as hopelessly unqualified as Secretary of State.

Attorney General: the international impact of this choice

But with the pick of Senator Jeff Sessions, we not only get an Attorney General who has a racist past and can OK now illegal torture and other actions including illegal surveillance, but one who can also use the FBI to punish political opposition — like the “throw her in jail” or registration of Muslims calls made during the campaign by Trump and others in his motley team. We could see a halting in enforcement of civil rights laws in America. These actions will likely be upheld by the Supreme Court with a new Trump pick who’s qualification is holding the most extreme views on all civil liberty, democratic voting protection, and fair governance, and agreeing with illegal presidential orders. He would in effect essentially be a marionette responding yes to any request in the hands of Trump and his far right and racist views. These picks will not least sadly give cover to every obscene brutal act by foreign rulers around the world.

The only way I can sum up the meaning of these appointments is that he has chosen either just compliant stooges or puppets or simply dangerous and unqualified and unbalanced people who can do great damage to our nation. It can also do the same to our global community by their acts of stupidity, crassness, and evil intent in opposition to every democratic, humanitarian, and decent moral value in existence. More appointments are coming, but these early ones do not signal well for constructive American leadership in the world nor for our well-being and democracy at home.

Harry Blaney – Center for International Policy
Harry Blaney is a Senior Fellow at the Center for International Policy. He brings over thirty years of experience in international affairs to CIP and has held senior positions in the federal government, policy research, and non-profit organizations. His experience includes the White House, State Department, foreign affairs think tanks, and US diplomatic posts abroad. His main focus has been on national security, including non-proliferation arms control, US-Europe relations, US-Russia, and global issues including energy, climate change, conflict zones, NATO, EU, and macro-strategic issues.