There are more than 140,000 military veterans incarcerated in US prisons, many of whom have been sentenced for violent and sexual crimes. But given their military experience, do veterans find prison to be less punitive compared to non-veterans? In new research, David C. May, Kristen L. Stives, Makeela J. Wells, and Peter B. Wood surveyed prisoners from six prisons to determine their ‘exchange rate’ – how many months a person is willing to serve of an alternative sanction to avoid a 12 month prison sentence. They find that veteran inmates were willing to serve almost twice as much time in the military to avoid prison as non-veteran inmates, and that among non-veterans, Blacks viewed the military as being more punitive than prison.

One in eight Americans has served in the military. In 2004, there were 3.4 million people enlisted, and 1.4 million were on active duty. Military enlistment has generally been declining over previous decades but those most likely to enlist are males, people from the southern United States, and those from lower economic backgrounds.

Military personnel also make up approximately 10 percent of the prison population. There were 140,000 military veterans incarcerated in United States’ prisons in 2004. Of the military veterans in prison, the majority (59 percent) were from the Army. Despite the large number of military veterans in prison, little is known about this population. In new research, we find that veterans – along with non-veterans – viewed alternative sanctions such as probation to be less punitive compared to prison. Veterans, however, were willing to serve almost twice as long in the military to avoid prison time compared to non-veterans.

Measuring differences between veterans and non-veterans

Inmates from six minimum-, medium-, and maximum-security prisons in a Midwestern state were selected to complete a 15-page survey. The survey asked about their perceptions of the punitiveness of prison, experiences with programs offered in prison, and personal information such as their age, race, marital status, and military experience. The findings of this study are based on the participation of 1,164 inmates. Of those inmates, 117 (10.1 percent) were veterans and 1,047 (89.9 percent) were non-veterans.

Both veterans and non-veterans viewed boot camp, jail, and day fines as more punitive than prison. For instance, veterans were only willing to serve 5.08 months of boot camp compared to 12 months in prison. Both groups also generally agreed that alternative sanctions such as regular probation and community service were less punitive than prison; therefore, they were willing to spend more than 12 months completing these sanctions. 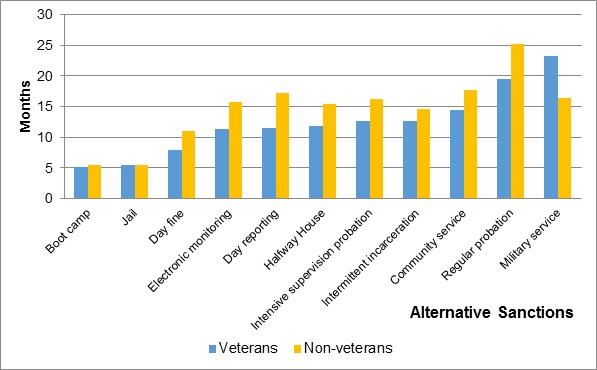 The findings from this study largely confirm previous research of exchange rates for veterans and non-veterans. Veteran inmates viewed prison as less punitive compared to nonveteran inmates. Non-veterans were willing to serve more than 12 months for a greater number of alternative sanctions compared to veterans. The picture is further complicated when considering race. Black veterans were different from other groups in the sample and more research needs to be done to understand the interaction between race and military status. Future work should continue to explore this area.

This article is based on the paper, ‘Does Military Service Make the Experience of Prison Less Painful? Voices From Incarcerated Veterans’, in Criminal Justice Policy Review.

David C. May – Mississippi State University
David C. May is a professor in the Department of Sociology at Mississippi State University. He received his PhD in Sociology with emphasis in Criminology and Deviant Behavior from Mississippi State University in 1997. He has published numerous articles in the areas of responses to school violence, perceptions of the severity of correctional punishments, fear of crime, and weapon possession in leading journals such as Justice Quarterly, The Prison Journal, Crime and Delinquency and books examining perceptions of the punitiveness of prison, fear of crime, school safety, and the causes of gun ownership and possession among male delinquents.

Peter B. Wood – Eastern Michigan University
Peter B. Wood is professor of Sociology in the Department of Sociology, Anthropology, and Criminology at Eastern Michigan University. His research includes the study of factors that motivate and maintain habitual offending, and issues associated with correctional policy and practice. His work has appeared in Criminology, Justice Quarterly, Journal of Research in Crime and Delinquency, Punishment and Society, The Prison Journal, Crime and Delinquency, Journal of Offender Rehabilitation, Journal of Criminal Justice, and Deviant Behavior.