We have been hearing a lot of talk about conspiracy theories these days. Whether it be Bernie Sanders suggesting that Wall Street is secretly running the country, or Donald Trump suggesting that the media was conspiring to prevent him from winning the presidency, or that the electoral registration system in the UK was deliberately sabotaged to crash hours before the registration deadline in an attempt to rig the Brexit vote, conspiracy theories abound.

Those who endorse conspiracy theories have been typified as out of step with the mainstream by academics and the media. However, conspiracy theories are not solely the realm of extremists and paranoids; they are much more common than that. In fact, a recent study reported that across recent nationally representative surveys, “over half of the American population consistently endorse some kind of conspiratorial narrative about a current political event or phenomenon.”

Not only do conspiracy beliefs cut across demographics and political attitudes, they can also affect policy attitudes, social behaviors, and even medical choices. Further, just the presence of these theories in the public zeitgeist can distract political elites from attending to more pressing public policy concerns. For example, President Bush had to repeatedly respond to accusations that he and Dick Cheney staged the 9/11 attacks, and President Obama had to hold a press conference for the sole purpose of releasing his long-form birth certificate. And if some armchair accounts of the 2016 presidential election outcome in the US are to be believed, conspiracy theories can also affect candidate attitudes and vote choice.

Given the potential political and social significance of conspiracy beliefs, a substantial and growing body of work examines the individual-level correlates of conspiracy endorsement. Our research builds on this literature to posit that conspiracy theory endorsement is a motivated process that serves both ideological and psychological needs. In doing so, we develop a theory that argues that the tendency to endorse a conspiracy theory is highest among people who 1) have a particular ideological worldview they want to protect (i.e., liberal or conservative), and to which the conspiracy theory can be linked, 2) have a strong motivation to protect that worldview and the ability to see how endorsing the conspiracy would serve that purpose (i.e., political sophistication), and 3) believe that the world is the type of place in which secretive, malevolent actions are not only possible, but also probable (i.e., low trust in government, the media, and people in general).

In other words, we hypothesize that political knowledge should make ideologically-motivated conspiracy endorsement worse, by making it more likely that people will see the connections between the conspiracy theory and the ideological worldview that endorsing the theory would bolster/protect. In addition, we hypothesize that trust should mitigate it; by making it more difficult for people to believe that powerful elites are engaging in secret plots for their own benefit, even if doing so would help them protect/bolster their ideological worldviews.

To test these hypotheses, we administered an original survey via Amazon’s Mechanical Turk platform (MTurk) in 2013 and replicated our findings using the 2012 American National Election Study survey (ANES). We assessed belief in “conservative” conspiracy theories (ones that impugn liberals/Democrats) and “liberal” conspiracy theories (ones that impugn conservatives/Republicans).

We asked respondents whether they believed each conspiracy was definitely not true, probably not true, probably true, or definitely true (responses were coded to range from 0-1, with higher numbers corresponding to greater endorsement in the theory). We also assessed ideology (whether respondents identified as conservative or liberal; self-identified moderates were dropped from the analyses), political knowledge (the average of responses to 14 civics and current events questions), and generalized trust (an average of trust in government, the police, the media, and people in general). We tested our hypotheses by examining the impact of ideology, political knowledge, and generalized trust on belief in the conservative conspiracy theories and on belief in the liberal conspiracy theories for both the MTurk and ANES data.

As Figures 1 and 2 show, consistent with the theory of motivated reasoning, conservatives are more likely to endorse the conspiracy theories that impugn their political rivals, and vice versa.

This ideological asymmetry—a result that was consistent across both datasets—was unexpected, but is consistent with the notion that conspiracy endorsement, and science denial more generally, is a more attractive worldview-bolstering strategy for conservatives than liberals. It is also consistent with an alternative explanation–given that both surveys were conducted during a Democratic presidential administration, conservatives may have been situationally induced to be more motivated to bolster their worldviews (as would have liberals if the political situation had been reversed). Future data collection will enable us to test our structural theory. The theory implies that, with the election of Donald Trump to the US presidency, liberals will now be situationally induced to be more motivated to bolster their worldviews (and therefore be more likely to endorse conspiracy theories that do so) than conservatives.

Our results have broader implications for an increasingly polarized political discourse. As we well know, political sophisticates tend to be among the most active citizens in the United States; our findings therefore highlight a normatively displeasing notion for those who wish to view democracy through even the most rose-colored of lenses. In today’s political environment, elites (however defined) can cast outrageous aspersions against their nemeses, and can count on at least a segment of their knowledgeable (and less trusting) base to endorse (and possibly spread) what is essentially misinformation. This was a well-observed tactic of Donald Trump throughout his campaign, at his rallies, and even when he was engaged in political debates—and our evidence demonstrates that he had an audience to speak to who was ready to accept and act on this kind of misinformation. Not only does polarized elite discourse make such tactics more likely, but polarization at the mass level means that the public will be all-too-willing to believe that the “other side” is capable of using sinister, secretive, and/or subversive means to win, which unfortunately, in turn, is likely to further exacerbate polarization and rancor among elites and the most active in the mass public.

This article is based on the paper, ‘Conspiracy Endorsement as Motivated Reasoning: The Moderating Roles of Political Knowledge and Trust’, in the American Journal of Political Science. 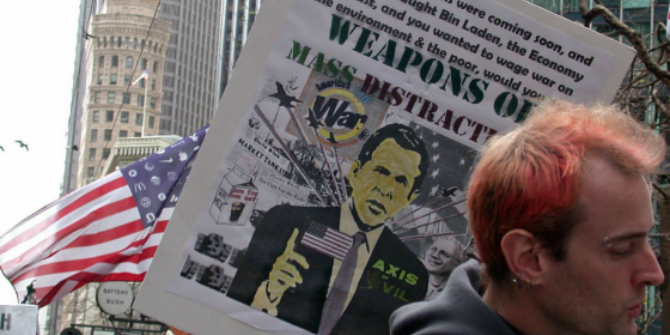