Where we live can have a huge influence on our social and economic wellbeing – but what happens when that housing is precarious? In new research, Geraldine Palmer examines housing dispersal strategies – historically used to improve the quality of life for public housing residents – by nonprofit providers to address homelessness. She finds that the built environment (in the form of specific buildings) is key in determining social and economic integration as is income and having a sense of community,

Since Julius Wilson’s (1987) seminal work, The Truly Disadvantaged, which coined the term “social isolation”, the fields of urban studies, planning, social and community psychology, have continued to focus on the importance that neighborhood and community attributes have on the social and economic well-being of individuals. It is heavily suggested that living in a specific area or located in a particular setting has positive or negative implications on opportunities and chances individuals and institutions have to excel socially and economically.

Figure 1 – Proportion of Black and White Families in Shelters in Chicago, IL 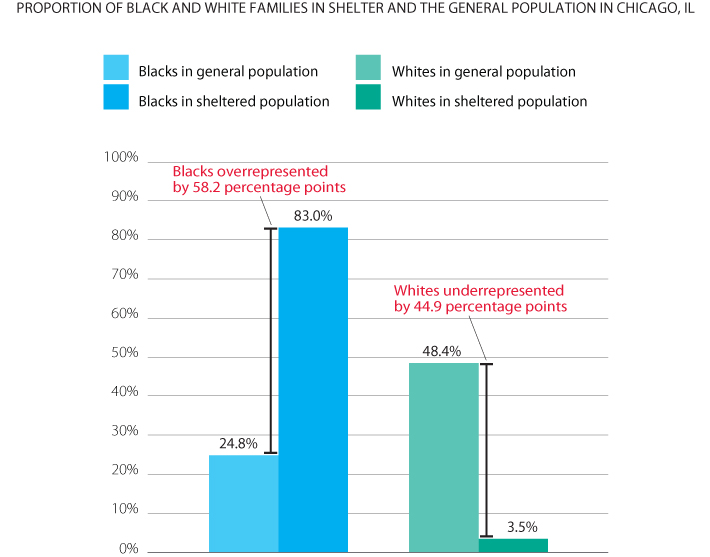 Studies continue to show that “where you live and where children grow up matters”. It seems that geography matters more to children in poor or very-low income families. The philosophy that living in a more affluent area influences the level of income a person has, and this appears to be widely similar across metropolitan areas in the United States. Researchers determine that upward mobility tends to be higher in metropolitan areas where poor families are more scattered among more affluent neighbors. To this end, income mobility or rising out of poverty has become important for economists and attention is being focused on pathways to quality of life, where historically the focus had been on equality.

Using the theory of the impact of social isolation, and suggestions from scholars on social and economic integration frameworks, currently nonprofit providers seek to end homelessness, place homeless individuals and families in existing and newly developed units in more diverse and affluent communities. With federal rent subsidies and supportive services such as case management and employment placement services, many Blacks/African Americans are able to now live in communities where historically this would not have been possible. Further, research indicates that the cycle of homelessness has ended in their lives, and some level of upward mobility has taken place.

This movement in geographic economics is worthy of continued research to determine solid predictors of upward mobility and poverty elimination, as well as to keep the importance of developing and preserving affordable housing in front of policy makers. Thus, when the opportunity surfaced to test whether or not any social and economic integration had occurred for clients of a Chicago nonprofit, moving into a more diverse and affluent community, I set about conducting such a study.

Rather than testing new variables, I used five variables identified from earlier formative studies seeking to determine any effects of housing dispersal strategies. These variables are: resident satisfaction, income, sense of community, neighborhood opposition to incoming developments or placements, and the developments or location placements of incoming tenants on property values within close proximity (1 square mile). However, what is different in my current study than prior research, is, I combined the five variables rather than testing them in several singular studies, in an attempt to get a clearer picture of any influential variables that influence or foster social and economic integration.

Importantly, my research reveals that residential satisfaction specially related to a particular building, suggesting that the built environment is key in determining social and economic integration, and could possibly be equally important as geography. Secondly, I examined income, which was not a selected variable by earlier studies, but upward mobility without adequate income seemed implausible. Therefore I included it. I found that increasing income was influenced by the new community, because many of the incoming tenants had no income before moving into the more affluent community. Income allowed the new residents to interface with other members including business owners in the community and build social networks. Thirdly, studies show having a psychological sense of community (PSOC) is an essential element to social and economic integration, perhaps by nurturing the four components identified in PSOC as critical to healthy human development: membership, influence, integration and fulfillment of needs, and shared emotional connection. Lastly, there was no evidence of neighbor opposition to any new subsidized or low-income developments or the incoming tenants. Moreover, there was no indication that any new development or placement of tenants in existing rental units within close proximity to single or multi-unit dwellings, experienced diminished property values.

These findings add to what we know about how to achieve social and economic integration through spatial location and are useful for housing policymakers, nonprofit housing providers and advocates of housing.

This article is based on the paper, ‘Examining the Effects of Scattered Site Supportive Housing on the Social and Economic Integration of Men Who Are Formerly Homeless and Primarily Black/African American’, in the Journal of Black Studies.