Women’s lack of representation in the House is not down to discrimination from voters or campaign donors.

Women’s lack of representation in the House is not down to discrimination from voters or campaign donors.

The number of women winning seats in US House of Representative elections has increased dramatically in recent years. And yet women currently hold only 19 percent of House seats, a figure which has remained relatively constant since 2002.  Some argue that unique barriers to entering politics can explain this lack of female representation while others attribute it to a “gender penalty” imposed on female candidates by voters and campaign donors.  In an analysis of primaries for House seats between 1982 and 2012, L. Jason Anastasopoulos finds no evidence that voters and campaign contributors engage in overt gender discrimination against female candidates. He argues that that current low levels of female representation are likely to be better explained by unique barriers to entering politics that women face. 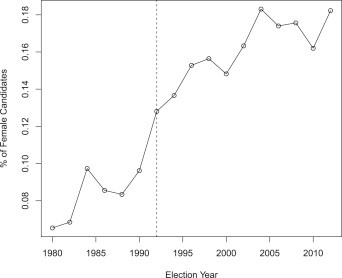 After the number of women holding House seats doubled between 1992 and 2002, many believed that women would reach parity with men shortly after the beginning of the new millennium.  What actually occurred, however, was significant decline in the rate at which women were entering, and winning, House races after 2002. As Figure 1 shows, the proportion of female candidates skyrocketed after 1990, but remained relatively constant after 2002 prompting many to wonder why the growth of female politicians in the House had effectively stopped.

Research on the role that gender bias plays in limiting the number of female representatives is mixed. Some find that even though gender stereotypes exist among potential voters, they do not hurt female candidates. Most observational studies which estimate the effects of gender on election outcomes find that female candidates tend to raise as much money and win general elections as often as males while others have found that after controlling for candidate “quality”, women do significantly worse than men, on average.

These contradictory findings demonstrate some of the hazards that omitted variables bias can pose. Sarah Fulton makes this point particularly clear because without the control for candidate “quality” she finds no female electoral disadvantage, but with it, a significant disadvantage emerges.

Of course, even if we were able to control for all of the observed differences between male and female candidates, there may be unobserved and/or unmeasured differences between male and female candidates that are correlated relevant outcomes such as election returns and campaign contributions which could affect causal estimates.

Is there causal evidence of gender discrimination against female candidates?

To correct for this and assess whether voters or campaign contributors levy a “gender penalty” against female candidates, I use a causal inference technique known as a regression discontinuity design. This technique is based on the intuitive idea that when a cutoff value determines whether a group receives a treatment, people who are barely above and barely below that cutoff value receive that treatment by chance. For example, if a scholarship required a minimum SAT score of 1300, students scoring slightly above a 1300 receive the scholarship while those scoring slightly below 1300 do not. For this group of students, we can claim that they received the scholarship by chance, even though their academic abilities are similar. The way that the treatment is allocated allows us to better estimate the causal effects of a treatment on a relevant outcome. 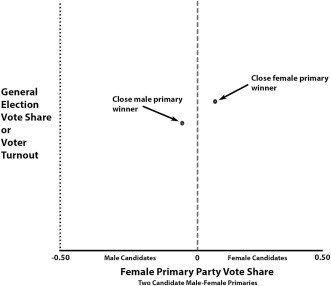 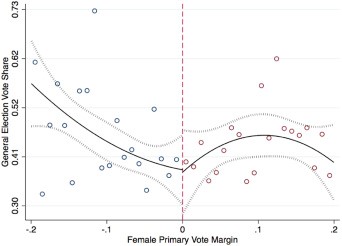 We find similar patterns when comparing contributions from individuals and political action committees (PACs), shown in Figures 4 and 5 below. 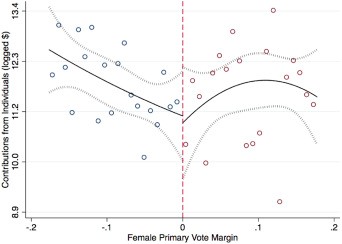 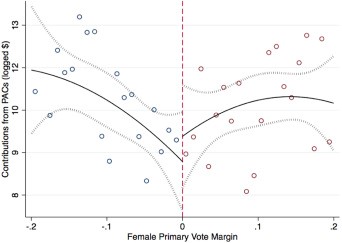 Taken together, these results suggest that similar male and female political candidates do not appear to face a gender penalty from voters, individual campaign contributors or PAC contributors.

The fact remains, however, that women occupy only 19 percent of the seats in the House of Representatives and this trend does not appear to be improving over time. These results and other data suggest that this may be due to unique barriers to entering politics that women face which should be explored in greater detail. In 2016, for example, out of the 2,421 House candidates that filed with the Federal Election Commission, only 272 or 11.2 percent of those candidates running were women.

This article is based on the paper, ‘Estimating the gender penalty in House of Representative elections using a regression discontinuity design’ in Electoral Studies.

L. Jason Anastasopoulos – University of Georgia
L.Jason Anastasopoulos is Assistant Professor in the departments of Public Administration and Policy and Political Science at the University of Georgia. His research interests include understanding how business interests affect policymaking processes at the state and federal levels of government in the US, understanding the roots of collective and religious violence internationally and how gender and race influence political processes among political actors in the US.