Donald Trump’s executive order preventing the entry of refugees and those from seven Muslim-majority countries has sparked protests across the country and the world. But have those protests had an effect on public opinion? Loren Collingwood, Nazita Lajevardi, and Kassra Oskooii present preliminary findings from a survey conducted before and after President Trump’s executive order. They find that after the ban, 25 percent more Democrats and an additional 15 percent of Republicans became opposed to it. In addition, one in five of all respondents stated that the protests had an impact on their views towards immigration policy.

On Friday, January 27th, President Donald Trump signed executive order 13769, “Protecting the Nation From Foreign Terrorist Entry Into the United States.” The order made changes to immigration policies and procedures and banned for 90 days the entry into the United States of individuals from seven predominantly Muslim countries.

The ban set off a fury of protests across US cities and airports. Thousands of Americans from coast to coast chanted slogans such as “No hate, no fear, refugees are welcome here.” While the ban raises several important Constitutional questions that are making their way through the nation’s courts, two public opinion questions have emerged: 1) Did the ban, and ensuing controversy shift public opinion, and if so amongst whom? 2) Did the demonstrations specifically shift public opinion against the ban?

Anticipating the executive order, we fielded a two-wave panel survey of 423 respondents between January 24-27th but before the president announced the executive order. We then fielded a second wave to 245 of the same respondents between February 2nd and 8th to assess individual-level change on support or opposition to the policy. While our data are not a representative probability sample, the shifts across a similar time period mirrors shifts seen in representative polling conducted by well-known polling outfits.

Who Shifted Against the Ban? A Story of Partisanship

The protests and ensuing media attention of the events unfolding at the airports across the country seem to have shifted public opinion. Among respondents who took both surveys, 33 percent shifted against the ban, 55 percent maintained their opinion, and 13 percent became more supportive of the ban. Overall then, opinion shifted about 20 percentage points net against the ban between the first and second surveys. The relatively small sample size means that we cannot look at many subgroup opinions with great statistical confidence, but clear findings emerge by party, which warrant discussion.

Given the state of polarization in American politics, and the mobilization of Democrats and liberals against the ban, we anticipated the strongest shift in opposition would come from Democrats as they shifted in line with elite cues, followed by Independents, with less movement among Republicans. In the pre-executive order wave, about 50 percent of our Democratic respondents were strongly opposed to the ban (see Figure 1). However, after the weekend, an additional 24 percent of Democrats shifted in opposition (now 74 percent strongly opposed, see Figure 2). This represents a tremendous individual- level shift in opposition, almost unprecedented in a 7-day period. 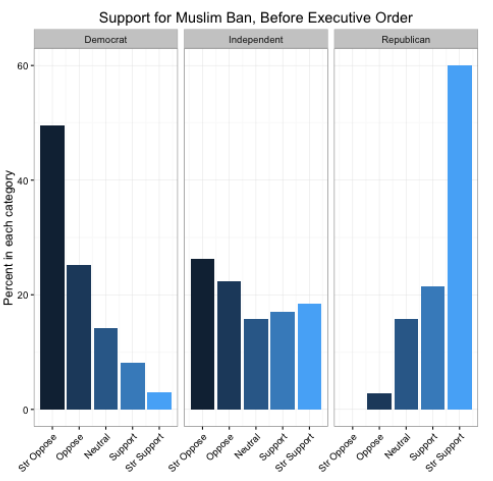 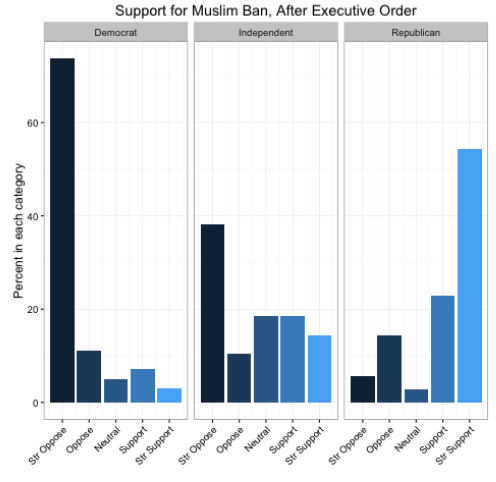 Independent voters had a more mixed response, but still, before the ban 26 percent in our sample strongly opposed the ban, whereas after the executive order and demonstrations, 38 percent strongly opposed the ban. Finally, before the order, just 3 percent of Republicans disagreed with a Muslim ban (either strongly or somewhat), but after the weekend, opposition approached 20 percent – a huge swing for Republicans.

As a placebo, we also asked respondents about attitudes towards the Keystone Pipeline and the border wall – both hot-button issues in the news but issues taking a backdoor to the immigrant ban. Across the two waves, attitudes on these two issues did not change in either a more supportive or oppositional direction. The shift in public opinion, then, appears narrowly tailored to the political effects surrounding the ban.

Did protests have an impact?

Recent research indicates that protests and social movements can influence Congressional representation and public opinion. To a large part, the effects of any political activity depend on how the issue is framed. And the recent coverage seems to have treated refugees and incoming immigrants in a relatively positive light: doctors being held up, five-year olds detained, and Iraqi contractors who risked their lives to assist the US military.

In wave 2, respondents were explicitly asked whether the weekend protests influenced their opinion about immigration policy: “Did the recent demonstrations and public statements against the recent immigration and visa ban impact your views toward immigration policy?” Overall, 20 percent of respondents said the protests and demonstrations influenced their opinion on public policy. Of these, about half (46 percent, see Figure 3) moved to oppose the Muslim ban. This is strong evidence that the protests had a substantive and positive impact. 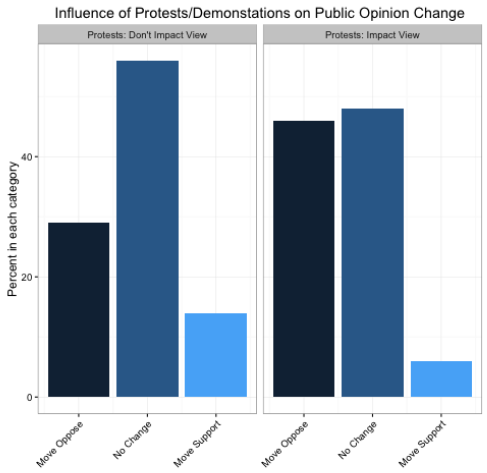 As the political and legal battles continue to mount, we may well expect more protests to Trump’s executive orders and political maneuvers. Our findings suggest that – at least in the court of public opinion – protests and demonstrations may well aid the party that is campaigning against the administration’s policies.

Nazita Lajevardi – University of California, San Diego
Nazita Lajevardi is a PhD Candidate at UCSD and will be joining Michigan State University as an Assistant Professor in American Politics. Her research lies at the intersection of race and ethnic politics, representation, and discrimination. In exploring the state of racial inequality in American politics, her work assesses how minorities fare under disenfranchising laws, discrimination by the masses, and at the hands of legislators.

Kassra Oskooii – University of Delaware
Kassra Oskooii is an Assistant Professor at the Department of Political Science and International Relations at the University of Delaware. His primary areas of specialization are American politics and political methodology. Within the field of American politics, his research and teaching interests include race and ethnic politics, political behavior, public opinion, and political psychology.