Not all those who commit burglary offenses do so for the same reasons – some are deliberate, planning their actions, while others are more impulsive. In new research on patterns of opportunism among burglars, Amber N. Sanders, Joseph B. Kuhns, and Kristie R. Blevins find that deliberate burglars are more motivated by money, while impulsive burglars were motivated by drugs and/or money. They suggest that burglars of both types may be dissuaded by crime prevention measures which might make their actions riskier.

Rational choice explanations of crime suggest that offenders act in ways that benefits them, but also to avoid negative consequences. In this sense, criminals must decide that their actions outweigh the risks associated with their intended crime. This idea is the basis for situational crime prevention, which aims to reduce opportunities for specific crimes by changing an environment. Common burglary prevention efforts include target hardening, like adding physical barriers such as locks to make a target more difficult to enter, and increasing surveillance such as improved lighting around a residence.

While it is understood that certain burglars are more opportunistic than others, comparisons among distinct patterns of offense planning have not been fully explored. In our research, we compared two groups of burglars who are now inmates in state prisons in Kentucky, North Carolina, and Ohio. The groups differed in their patterns of offense planning: 119 planned their offense (deliberate burglars) versus 257 who reported seldom planning an offense (impulsive burglars). Our findings reveal many similarities and differences in the motivations, target selection, factors that deter offending, and techniques used during the commission of a burglary between the two groups of burglars. 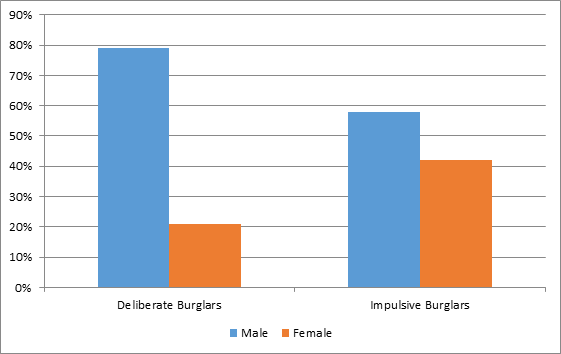 Figure 2 – Average number of factors considered when deciding to burglarize 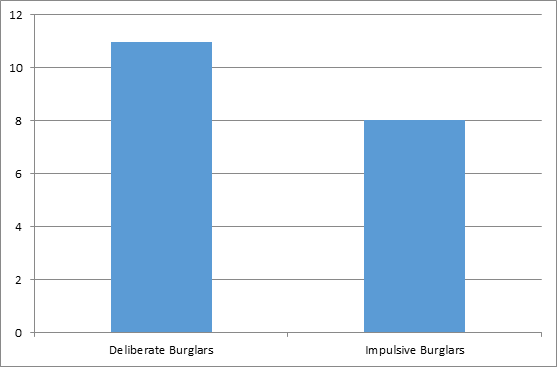 Deliberate burglars will, on average, take more burglary tools (e.g. crowbar, lock picking kit, and mask) than an impulsive burglar. When coming into contact with another person while committing a burglary, deliberate burglars were also significantly more likely to have a prepared, prefabricated story ready (e.g., pretend to be a delivery person, a maintenance worker or an employee). In sum, although deliberate burglars are more likely to engage in creative techniques and use tools during their burglary, more often than not they will avoid unnecessary risks and attempt to locate a target with fewer obstacles to overcome.

Figure 3 – Average number of tools typically taken on a burglary 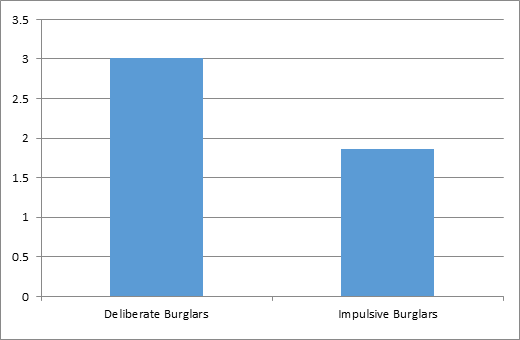 Our findings are important for both crime prevention and recidivism (i.e. repeat offending). First, burglars actively consider how many physical and crime preventive obstacles they may have to overcome in order to succeed in their burglary. They select targets based on visual cues surrounding the target, may have intricate techniques for committing a burglary, and are typically deterred by crime prevention measures. Impulsive burglars are much more easily dissuaded from a target. Though deliberate burglars are likely to consider more aspects of a target, they still report being deterred by details that would make the burglary riskier, such as presence of a lock or alarm and whether it seems like the target is occupied. This implies that elements as outlined within situational crime prevention, such as target hardening and increasing surveillance, are effective in deterring burglars from a potential target. We find that such measures work best against the impulsive burglar, but still are effective deterrents for the deliberate burglar as well.

Second, individuals’ correctional and treatment services rendered by the criminal justice system could be very helpful in preventing recidivism among burglars. Specifically, deliberate burglars may benefit from vocational training and other programs designed to increase levels of employability. Such programs may provide the necessary skills for these individuals to find and maintain legitimate employment. Outcomes regarding impulsive burglars, suggest that substance use treatment should be a priority for these offenders.

This article is based on the paper, ‘Exploring and Understanding Differences Between Deliberate and Impulsive Male and Female Burglars’, in Crime & Delinquency.

Featured image: “Burglars Burgle Elsewhere” by hobvias sudoneighm is licensed under CC BY 2.0