Environmental factors greatly contribute to inequality in the United States. Research by Maryia Bakhtsiyarava and Raphael Nawrotzki looks at the relationship between an area’s level of industrial pollution and the presence of immigrants. They find that while most international immigrants to the US tend to migrate to less polluted areas, immigrants from Mexico are disproportionately exposed to environmental hazards in wealthy areas, which perpetuates their vulnerable status.

Environmental inequality and its adverse health effects have received substantial public attention around the world. The very recent Flint water crisis reminded us that not everyone even in such a wealthy country as the United States enjoys one of the basic human rights – the right to clean water. As Flint slowly disappeared from the news and political debates, the disproportionate exposure to hazardous elements in the environment remains a reality for some in the US.

Empirical research has shown that racial and income minorities, low-income households, and other vulnerable populations bear the burden of exposure to toxic facilities, dumps, and incinerators. However, one group that has been somewhat underrepresented in environmental inequality research are immigrants. Our recent research investigates whether there is a relationship between an area’s level of industrial pollution and the presence of immigrants, and whether the relationship varies depending on immigrants’ country/region of origin.

The general consensus among researchers is that immigrants do in fact experience environmental inequality. Case studies observed the disproportionate siting of toxic facilities in immigrant communities. Even more jarring are efforts to restrict immigration to the US on the grounds that an influx of immigrants depletes America’s ecosystems: in 2000 the city of Aspen, Colorado, approved its “population stabilization” resolution. The Aspen City Council claimed the city could not continue to welcome more and more people and still preserve its “quality of life”.

Even though immigrants resemble native-born minorities in their sociodemographic characteristics, they warrant special attention because of their legal standing and wide prevalence of limited English proficiency (50% of US immigrants in 2013 had limited English proficiency). This is not to say that all immigrants in the US share these characteristics, nor does it mean that these factors automatically translate into exposure to environmental hazards. However, these factors create social vulnerability and undermine immigrants’ capacity to withstand environmental hazards. Immigrants’ language barrier may affect their access to environmental hazards awareness programs. They may also lack support systems to protect themselves from the discriminatory attitudes of the majority population (akin to the Aspen example above). The consequences of exposure for immigrants can be extremely debilitating because of their limited economic resources, and repairing damages and seeking health care can take a substantial toll on their resources and disrupt employment.

We combined sociodemographic data from the American Community Survey (ACS) from 2005 through 2011 with toxicity-weighted chemical concentrations from the Environmental Protection Agency’s Toxics Release Inventory for 2010-2012 to investigate the relationship between toxin exposure and immigration rates for recent immigrants across Public Use Microdata Areas (PUMAs). PUMAs are close to US counties in size and represent statistical geographic areas that are nested within states and contain a minimum of 100,000 people. The measure of exposure to environmental hazards represents toxicity-weighted releases of chemicals in milligrams per cubic meter (mg/m3) per PUMA averaged for 2010 – 2012.

Figure 1. Spatial distribution of immigrants in the United States, averaged across 2005-2011. Note: numbers reflect counts of immigrants per 10,000 people per PUMA. 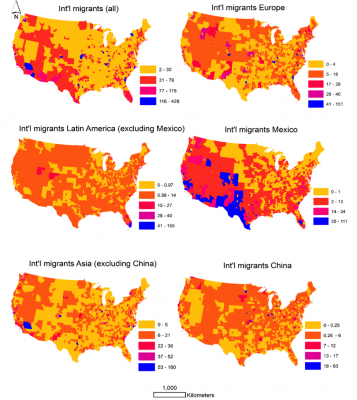 While the largest proportion of Mexican migrants can be found in the southwestern border regions, Chinese migrants tend to cluster in the Midwest. Immigrants from Europe, Latin America, and Asia do not exhibit clear spatial patterns.

Figure 2. Average toxicity-weighted chemical concentrations for US PUMAs during 2010-2012 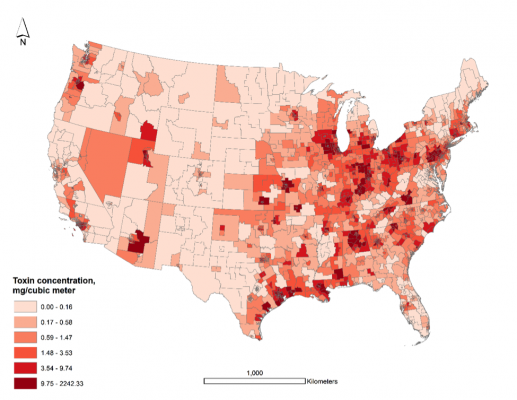 A clear spatial pattern in toxin concentration is evident as can be seen in Figure 2. The highest concentrations are observed in the Rust Belt and near the Gulf of Mexico and are linked to steel and oil production, respectively.

In contrast, for Mexican, Chinese, and other Asian immigrants we found no relationship between toxin release and their concentration in PUMAs. Employment in polluting industries such as oil-production and mining, as well as lower average socioeconomic status may explain Mexican immigrants’ lack of a pollution advantage. The confluence of below-average education and low income may force Mexicans to settle in areas of low rental prices but high environmental burden.

Figure 3. Interaction effect between toxin release and income on the expected proportion of Mexican immigrants within each PUMA 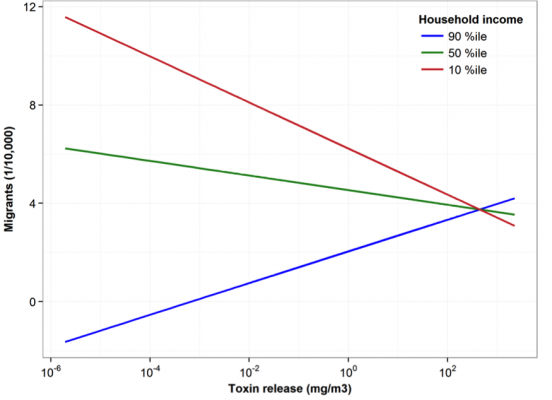 We further investigated how the relationship between industrial pollution and immigration rates for Mexican immigrants depends on income levels in an area. As can be seen in Figure 3, in poor areas within the 10th percentile of household income, Mexican immigrants display the pollution advantage and tend to migrate to less polluted areas. However, in the wealthiest PUMAs (90th percentile of household income), this relationship is inverted. In groups of these high-income PUMAs, Mexican immigrants disproportionally migrate to areas of highest toxin release. This pattern may be explained by Mexican immigrants’ generally low socioeconomic status, discriminatory housing market practices, and unique legal status. These factors prevent them from residing in environmentally safe areas when housing prices are high and rental markets are controlled by discriminatory elites.

In sum, international immigrants in the US overall do not disproportionally migrate to environmentally unsafe areas. On the contrary, they tend to migrate to less polluted areas and thus demonstrate a high degree of resilience. However, this pollution advantage is not shared by all immigrant groups alike and only emerges for immigrants from Europe and Latin America (excluding Mexico). In high income areas, Mexican immigrants are disproportionally exposed to environmental hazards and do not exhibit any pollution advantage.

Given Mexican immigrants’ disproportionate exposure to environmental hazards in high-income areas and overall limited English proficiency, communities should publish information about the introduction of hazardous facilities in their neighborhood not only in English but also in Spanish. Besides preventing disproportionate siting of hazardous facilities efforts should also be made to mitigate the existing consequences of such siting, including housing support, planting of trees and protecting water sources. Such policies may help ameliorate environmental inequality among vulnerable subpopulations, such as Mexican migrants, and will help create a society where every individual can exercise their human right to a safe and healthy environment.

This article is based on the paper “Environmental inequality and pollution advantage among immigrants in the United States” in Applied Geography.

Maryia Bakhtsiyarava – University of Minnesota
Maryia Bakhtsiyarava is a PhD student at the Department of Geography, Environment and Society at the University of Minnesota and a Doctoral Trainee in Population Studies at the Minnesota Population Center. Her research examines how environmental factors affect migration, fertility, and reproductive health outcomes. Her recent research projects examine the effects of climate variability on livelihoods, birth weight, and domestic and international migration in the developing world.