While the President is seen as having the final say in all US policymaking, congressionally formed veto-proof supermajorities are occurred more frequently on important issues between 1981-2008. Data collected by Linda Fowler and Bryan W. Marshall examine the paradox this pattern presents; partisan divisions that traditionally made legislation difficult to pass also provided mechanisms for enhanced party control over floor proceedings to foster bipartisanship and constrain the president’s options.

Political observers depict presidents as dominant in U.S. policymaking.  Yet Congress passed a surprising number of nontrivial bills between 1981 and 2008 with majorities large enough to withstand a presidential veto.  As ideological divisions between Democrats and Republicans grew, legislative leaders gained greater control over floor procedures and used their enhanced influence to attract large, bipartisan coalitions.  The lopsided outcomes signaled the White House about costs of rejecting a bill and provided information that enabled presidents to deploy their veto strategically.  By demonstrating how procedural tactics generated supermajorities and constrained executive options, our research challenges conventional wisdom about the relationship between Congress and the White House.

The study relies on a unique data set of over 3,400 bills to examine coalition expansion through procedures.  The analysis identifies politically salient bills based on a bill’s policy content and page length.  The research breaks new ground by analyzing presidential decisions during the last stage of the lawmaking process as a choice among multiple options of varying costs and benefits.

Of the thousands of bills considered in each two-year Congress, the majority involve routine or symbolic matters.  The House and Senate determine which bills receive a formal roll call, however, an action that conveys valuable information to the White House about members’ commitment to a measure.  For example, a bill passing under unanimous consent in both chambers represents a different strategic situation than one garnering favorable recorded votes from 401 House members and 60 senators.  Both measures received strong support, but the latter case entailed a public commitment by lawmakers to the bill and signaled the possibility the Senate could fall short of the two-thirds necessary to over-ride a veto.

Veto-proof bills occurred when they received a recorded vote of 66 percent or more in at least one chamber and unanimous consent or roll call of 66 percent in the other.  In contrast, veto-chance bills entailed bills that received a recorded vote of less than 66 percent in at least one chamber.  Figure 1 below shows the trend from 1981- 2008, revealing veto-proof tallies increased to about 30 percent of nontrivial bills a year, peaking after the 1994 election that triggered the Gingrich revolution and the transition in Congress from a more decentralized to increasingly party-oriented institution.  Over the same period, Figure 1 shows veto-chance tallies remained relatively constant.

Figure 1: Proportion of Bills with Veto-Proof or Veto-Chance Majorities 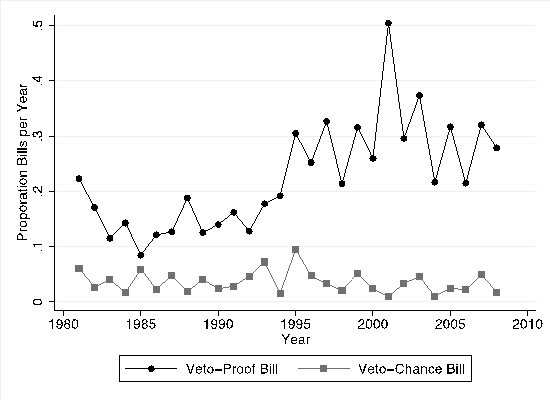 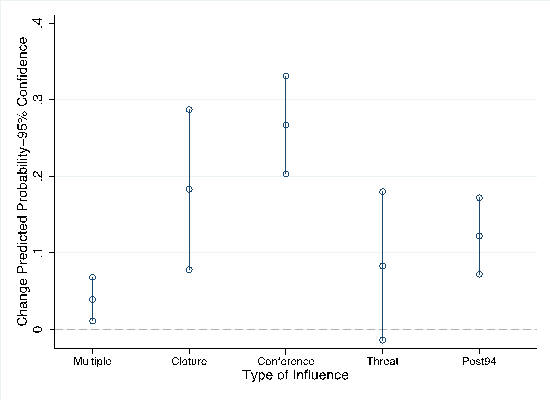 Presidents have several options when a bill reaches the Oval Office: sign the measure without comment; add a rhetorical or constitutional signing statement to flag the bill’s positive or negative aspects; or reject it with a veto. Each option can influence public perceptions of the president and his future relationship with the legislative branch. The executive could be blamed for legislative failure, for example, or appear weak by accepting a bill it previously opposed.

Statistical analysis shows information about a bill’s legislative history systematically affected presidential decisions.  From 1981 through 2008, presidents focused their veto power on bills that offered a chance for bargaining or involved veto threats. The estimated changes in probability of each type of action appear in Figure 3 and indicate veto-proof tallies raised the likelihood of signing statements.  Super-majorities did not produce a significant difference in the probability of a veto, however, because presidents used pocket vetoes at the end of a legislative session when Congress had no opportunity to override their actions.  Although the probability of a veto remained exceedingly low even with a veto-chance measure, the positive change from an estimated 0.0001 to 0.01 nevertheless represents a dramatic upward shift.  The greatest positive change in probability of signing statements and vetoes arose from veto threats prior to a bill’s passage. 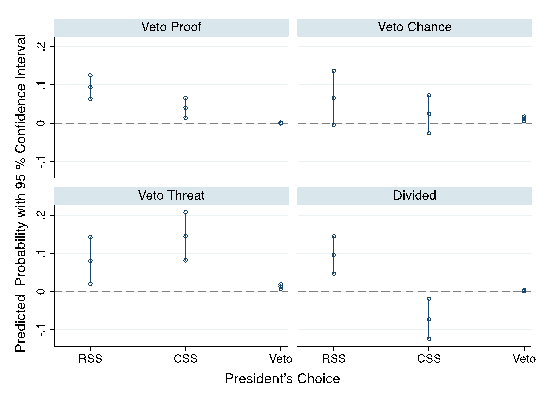 In summary, our research indicates bipartisan super-majorities occurred more frequently between 1981-2008 than most political observers acknowledge, as Congress circumvented the president’s most formidable tool—the veto—when it’s political interests were at stake.  During a period of rapid polarization, party leaders gained procedural capacity to generate veto-proof coalitions, and their tactics indicate oversized coalitions were intentional, not accidental.  These findings highlight procedural strategies as more than “inside baseball” and warrant attention along with lawmaker’s polarized policy preferences in understanding coalition formation.

This article is based on the paper Veto-Proof Majorities, Legislative Procedures, and Presidential Decisions, 1981–2008 in Political Research Quarterly.

Note: This article gives the views of the authors, and not the position of USAPP – American Politics and Policy, nor of the London School of Economics.

Linda Fowler – Dartmouth College
Linda L. Fowler is Professor of Government and Frank Reagan Chair in Policy Studies, Emerita, and teaches and conducts research at Dartmouth College.  Fowler received a Guggenheim Fellowship in 2005 and published the resulting book, Watchdogs on the Hill: The Decline of Congressional Oversight of U.S. Foreign Relations, in 2015.  Fowler has authored two books on congressional candidates and numerous articles on American politics.

Bryan W. Marshall – Miami University
Bryan W. Marshall is Professor and Assistant Chair of the Department of Political Science at Miami University. His teaching and research is on Congress.  Marshall has a forthcoming book, The Committee, co-authored with Bruce Wolpe (University of Michigan Press).  The Committee takes you inside the House Energy and Commerce Committee to give a first-hand glimpse into the rough-and-tumble politics of cap-and-trade, healthcare reform, BP oil spill aftermath, and the debt ceiling crisis.