Minor parties have a reputation for futility in the United States, but electoral rules in certain parts of the country enable them to survive, thrive, and influence elections. Benjamin Kantack argues that fusion laws, which allow multiple parties to nominate the same candidate, give minor parties in New York the ability to affect the outcomes of close U.S. House of Representatives races.

Majorities of Americans view both the Democratic and Republican parties unfavorably, and an increasing number of Americans refuse to identify as Democrats or Republicans. Yet the two major parties continue to dominate American elections, and victories for independent or minor-party candidates are few and far between. Many voters, thinking strategically, are reluctant to cast their ballots for minor-party candidates out of the fear of wasting their vote on a candidate who has no chance to win. Even worse, voting for a minor party might spoil the election: after the 2016 election, minor-party candidates Gary Johnson and Jill Stein were accused of siphoning crucial votes away from Hillary Clinton and handing Donald Trump the presidency.

New York is an exception to this trend of minor party futility. Since 1952, a majority of U.S. House of Representatives races in the Empire State have featured four or more political parties. Today, more than a quarter of New York voters are registered as either minor-party members or independents.

The reason for New York’s vibrant multiparty culture is fusion, an electoral rule that allows candidates to be nominated by more than one party for the same office. Rather than nominating a stand-alone candidate with no chance of winning, New York’s minor parties regularly “cross-nominate” Democratic and Republican candidates, who appear on the ballot once for each party that nominates them. When the votes are counted, each candidate receives all of the ballots cast for him or her, regardless of the party line on which they were cast. This means that voters can vote for major-party candidates on minor-party lines to express their support for minor parties without wasting their vote or potentially spoiling the election.

Fusion benefits New York’s minor parties by giving them a way to influence politics by using their cross-nominations as bargaining chips. Major-party candidates regard appearing multiple times on the ballot as electorally beneficial, and minor parties use that perception to their advantage. Minor parties in New York have parlayed these cross-nominations into donations from major parties, policy concessions on state minimum wage laws, and even public-sector jobs for party members. They can even influence major-party primaries by nominating their preferred candidate in advance, forcing the major party to follow suit or risk a spoiler effect in the general election. 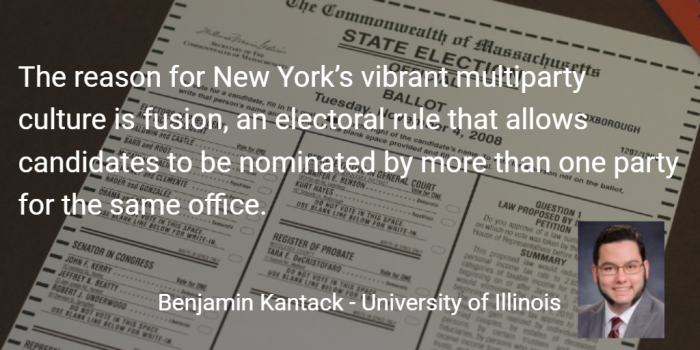 Are major parties right to pursue cross-nominations so avidly? There are certainly many ballots cast on fused minor-party ballot lines in New York elections, but how do we know these are votes that the major-party candidates wouldn’t have gotten otherwise? Just by looking at the election results, it is impossible to tell whether fusion is bringing new voters to major-party candidates, or simply shifting votes from major-party lines to minor-party lines.

We can get a more accurate estimate of the effect of fusion on electoral performance by estimating a regression to predict margin of victory based on the number of fused ballot lines. In the 1,036 contested U.S. House of Representatives races in New York between 1952 and 2014, cross-nominations by qualified minor parties (i.e., minor parties with automatic ballot access) had a substantial impact on candidates’ margins of victory. This effect ranges from 0.97% to 7.34%, depending on whether the election is held in a presidential or midterm year, whether the district is in New York City or upstate, and whether the major-party candidate is a Democrat or a Republican.

Figure 1. Effects of fused ballot on lines on margin of victory 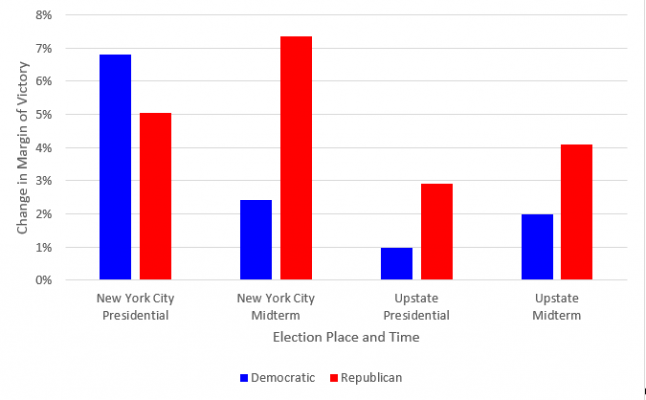 Most congressional races in New York are too lopsided for fused ballot lines to be game-changers. However, in 59 (or 5.7%) of these 1,036 races, these estimated effects suggest that the winning candidate would have lost without the help of fusion, or that the losing candidate would have won with one more cross-nomination to his or her name. Considering how much incumbency advantage, noncompetitive districts, and other factors determine the outcomes of congressional races, the fact that fusion still manages to tip the scales in so many cases is striking.

The impact of fusion on New York elections offers a unique perspective on voter decision-making in an era of unpopular major parties. Critics of fusion argue that it represents a “false choice” by allowing major-party candidates to run on minor-party ballot lines. Yet voters clearly respond positively to the opportunity to express their support for a minor party without wasting their vote on a candidate who is sure to lose. In close elections, the unpopularity of a candidate’s major party can literally cost him or her the race if minor-party cross-nominations are not available to capture disaffected voters.

This article is based on the paper Fusion and Electoral Performance in New York Congressional Elections in Political Research Quarterly.

Benjamin Kantack – University of Illinois
Benjamin Kantack is a PhD candidate in political science at the University of Illinois. His research interests include political psychology, voter decision-making, and citizens’ orientations toward politicians and political institutions. His dissertation project examines the ways in which voters attempt to reconcile perceived policy disagreements between themselves and their preferred candidates.