Music has been an integral part of US electoral campaigns for centuries. Since the 1960s, presidential candidates have increasingly used prerecorded songs on the campaign trail, and musicians have been objecting to politicians using their work ever since. Eric T. Kasper outlines the history of music in presidential campaigns, and notes that musicians are more likely than ever to object to presidential candidates’ use of their songs. Given the importance of musicians’ work in campaigns and the tacit endorsement it offers a candidate, Kasper argues that President Trump’s unprecedented and unapologetic approach to musicians’ objections is at odds with the established protocol of permission-based music use in campaigns, and that only his uniqueness as a candidate made this possible.

Similar to celebrity endorsements, musical artist endorsements are a proxy for overall support; more musicians behind a candidate serve as a signal that the campaign is healthy. Like other celebrities, A-list musical artists tend to be wealthy, so they can help with presidential candidates’ fundraising efforts. A major musician can help produce larger turnout at a candidate’s rally, meaning that more people are available at the event to approach as potential volunteers or donors. In these ways and in others, the words of musicians, whether they be endorsements or objections, matter. For most presidential candidates, the support of these musicians will continue to be an asset, but if those artists have already been offended by a campaign playing music without their support, then these potential benefits are lost.

Musicians have been objecting increasingly to presidential candidates using their songs since the 1960s. Yet, presidential candidates in America’s earliest elections used music without complaints or threats of lawsuits. Two factors help to explain this. First, copyright law developed rather slowly. Congress gave published music copyright protection in 1831, but this protection was for a relatively short period and solely for publications by American composers. Thus, music publishers and presidential campaigns early in American history were able to repurpose popular British tunes without breaking copyright law. Congress later gave copyright protection to public performances and musical recordings, and progressively extended the period of copyright. Today, music copyright protection exists in all formats for 95 years after publication or 70 years after the author’s death. In short, artists have more legal defenses for their songs now, making them more likely to assert their rights.

A second factor explaining the higher number of artist objections nowadays lies in how presidential campaigns have changed their music use. Until the mid-twentieth century, candidates often took existing tunes and rewrote lyrics to match the campaign’s messages. For instance, John Kennedy had Frank Sinatra modify “High Hopes” in 1960 and Lyndon Johnson’s campaign had “Hello, Dolly!” changed to “Hello, Lyndon” in 1964. In both cases, these customized versions were written by the original artists, meaning that these copyright holders/songwriters supported the candidates.

By the 1980s, however, presidential campaigns – following advertising trends – began using prerecorded pop songs on a regular basis. For example, in 1984 Ronald Reagan famously played Lee Greenwood’s “God Bless the U.S.A.”; in 1992 Bill Clinton employed Fleetwood Mac’s “Don’t Stop (Thinking About Tomorrow)”. These candidates had the artists’ support (something still common in contemporary elections), but there is a growing trend of musicians objecting to candidates’ use of their songs, due to the appeal and ease of playing prerecorded pop music.

Musicians slowly began objecting to the use of their songs in political campaigns in 1964. When Barry Goldwater tried to parody “Hello, Dolly!” as “Hello, Barry”, Broadway producer David Merrick threatened a lawsuit, leading Goldwater to cease using it. In 1988, Bobby McFerrin alleged that George H.W. Bush’s campaign used “Don’t Worry, Be Happy” without permission and Bob Dole’s campaign changed Sam and Dave’s “Soul Man” into “Dole Man” without permission in 1996.

By the turn of the century, these objections began to increase. The George W. Bush campaign encountered multiple objections by musicians in 2000, having burned music by artists such as Sting, Tom Petty and John Mellencamp onto a rally CD and publicly played songs on the disc, apparently without securing these artists’ permission. In 2008, Mike Huckabee and John McCain were both accused of playing songs without permission, with ABBA, Van Halen and the Foo Fighters all publicly objecting and/or threatening legal action in response to their work being used. Jackson Browne took it a step farther and filed a lawsuit against McCain for using “Running on Empty”, with the case later settled out of court.

Many cases of pop musicians objecting to candidates’ use of their songs have been against Republicans, which is probably to be expected since most pop artists tend to be politically liberal. However, sometimes Democratic candidates receive complaints too. For instance, Barack Obama’s playing in 2008 of “Hold On, I’m Comin,’” by Sam and Dave resulted in a letter from Sam Moore, asking for the campaign to no longer play the tune.

2012 saw a further number of objections from musicians. Republican candidates Michelle Bachmann, Newt Gingrich and eventual nominee Mitt Romney all garnered objections for their use of “Walking on Sunshine”, “Eye of the Tiger” and “Wavin’ Flag” without permission respectively. Notably, the Romney/Ryan campaign respected artists’ wishes regarding use of their work: when the Romney/Ryan campaign played Twisted Sister’s “We’re Not Gonna Take It,” singer Dee Snider denounced the use of it, resulting in the campaign’s appropriate response: “We’re Not Gonna Play It Anymore.”

Many cases above stemmed from campaigns neglecting to obtain copyright permission. In some cases, though, it appears that the campaign had secured permission to use the song; nevertheless, typically the campaign would stop playing it if an artist objected. In the 2016 campaign for the White House, however, several noteworthy instances of Donald Trump using music resulted in neither an apology nor cessation of the song’s use. When Trump announced his candidacy, he played Neil Young’s “Rockin’ in the Free World.” Young claimed that Trump was not authorized to use the song. As the campaign progressed and Trump employed a wide variety of music, various artists complained, including the Rolling Stones (“You Can’t Always Get What You Want”), Adele (“Skyfall” and “Rolling in the Deep”), Twisted Sister (“We’re Not Gonna Take It”), Steven Tyler (“Dream On”), and R.E.M. (“It’s the End of the World as We Know It”). 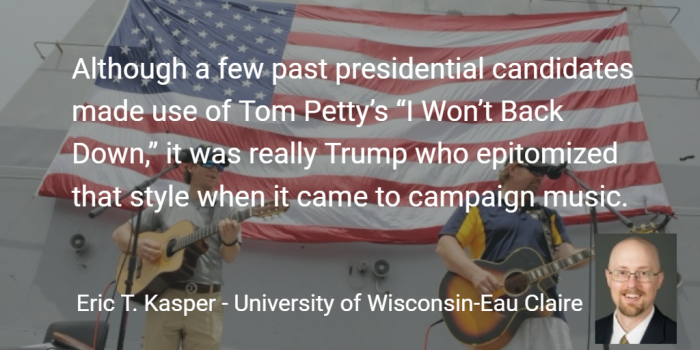 Although personal consent may not have been obtained from these artists, Trump might have secured a public performance license from ASCAP, The American Society of Composers, Authors and Publishers. However, a campaign that complies with copyright law may still see an artist complain or file a lawsuit for another issue, including allegations that a candidate’s use of a song falsely implies that the artist endorses the candidate. All told, presidential candidates present themselves in the best musical light if they secure consent from a copyright-holding artist or if the artist performs the song for the campaign. While there were musicians who supported Trump in 2016 (including Ted Nugent, Wayne Newton, and Kid Rock), he often chose to play other artists’ songs.

However, Trump was a unique candidate, in that he was an outsider with anti-establishment appeal, which likely buffered him from some of the fallout that typically accompanies traditional politicians’ use of music from nonconsenting artists. His campaign did not issue apologies to musical artists in the way that previous presidential candidates did when they were confronted with these situations. This should come as no surprise, given Trump’s personality and self-described approach as a tough negotiator. Although a few past presidential candidates made use of Tom Petty’s “I Won’t Back Down,” it was really Trump who epitomized that style when it came to campaign music. Given that most of the musical artists who complained about Trump’s use of their songs were likely to have more liberal fan bases, Trump probably calculated he had little to lose if they complained, as those artists’ cries were likely to fall upon the ears of people who already were not voting for him. Although Clinton had many more celebrity endorsements than Trump (including musical celebrity endorsements), Trump was a pop culture celebrity in his own right, placing him in a different position than we typically see presidential candidates.

Future presidential candidates, especially traditional politicians, are better advised to follow more conventional musical advice to avoid public relations nightmares or lawsuits. Trump was able to “get what he wanted” musically, but other candidates are unlikely to be quite so lucky.

Eric T. Kasper – University of Wisconsin-Eau Claire
Eric Kasper is an Associate Professor of Political Science at the University of Wisconsin-Eau Claire, where he also serves as the Director of the UWEC Center for Constitutional Studies. He has authored or co-authored four books, including Don’t Stop Thinking About the Music: The Politics of Songs and Musicians in Presidential Campaigns (co-authored with Benjamin S. Schoening). He is currently working on multiple projects, including one on the intersection of the U.S. Constitution and movies.

August 1st, 2017|Democracy and culture, Elections and party politics across the US, Eric T. Kasper|0 Comments
Previous post Next post