Since the September 11, 2001 terrorist attacks, countering violent extremism in the United States has remained a top homeland security concern. Despite Jihadist extremists’ role in the events of 9/11, America has also faced a persistent and deadly form of domestic terrorism stemming from the extreme far-right, who have been responsible for hundreds of deaths over the past 25 years. A recent study by criminologists Brent Klein, Jeff Gruenewald, and Brent Smith examined the situational risk factors associated with far-right terrorist attack success. Their findings suggest that target vulnerability, lone actors, and unsophisticated weaponry are common correlates of far-right terrorism, information that may aid in the investigation and prevention of future domestic terror attacks.

Over the past three decades, far-right ideologically motivated extremists have remained a persistent threat to public security in the United States. The 1990s, for instance, introduced a wave of violent crime by several so-called neo-Nazis/racist skinheads, anti-government radicals, and Patriot groups, as well as high-profile attacks from unaffiliated “loner” extremists. Perhaps most infamous of these crimes were Timothy McVeigh’s Oklahoma City truck bombing against the Alfred P. Murrah Federal Building in 1995, claiming the lives of 168 and injuring hundreds more, which was, at the time, considered the worst act of terrorism to occur on U.S. soil.

Today, the threat of far-right terrorism continues to loom large. In fact, since 2001 right-wing terrorists – who primarily target social minorities and police – have successfully killed 131 people in 81 homicide events. Two recent, high-profile attacks exemplify this violence, including Dylann Roof’s racially motivated mass shooting against a predominantly Black church in South Carolina and May’s anti-Muslim knife attack aboard a commuter train in Portland, Oregon, which killed two and injured one other person. This more recent spate of ideologically motivated violence has once again made the threat of far-right terrorism palpable to Americans, and law enforcement partners across the country consider right-wing extremist violence a grave risk to community safety.

As criminologists, we have spent over 20 years collecting and analyzing data on extreme far-rightists to better understand the nature of America’s oldest and most persistent source of domestic terrorism. Recently, our research enterprise has shifted to new territory: understanding why and how some far-right terrorist threats culminate into successfully completed attacks, while other planned attacks fail or are foiled by police. Distinguishing between successful and unsuccessful terrorism has been of growing interest among counter-terrorism officials, law enforcement, and scholars for several years. To our surprise, no previous study has scientifically examined what factors best predict patterns of far-right terrorism success. Our most recent study set out to fill this gap in the research literature.

Using 30 years of data from the American Terrorism Study (ATS), we collected information about each far-right attack thought to potentially predict its successfulness. Our goal was to identify risk factors, or indicators, of incident success that would be readily available to law enforcement during a counter-terrorism threat assessment or preliminary investigation. If we could identify specific characteristics of the incident itself that are statistically associated with those completed attacks, police may be better equipped to focus vital preventative resources on the most viable of threats. 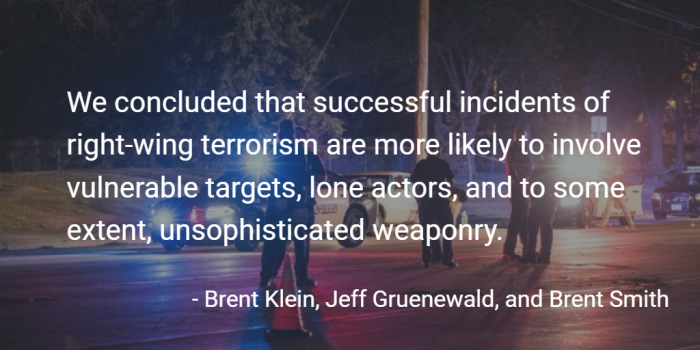 Our analysis, based on a solid tradition of situational crime theories and prior research, revealed several incident-level predictors that are related to far-right attack success. We concluded that successful incidents of right-wing terrorism are more likely to involve vulnerable targets, lone actors, and to some extent, unsophisticated weaponry. Summaries of our key substantive findings are listed in turn below.

Proximity of targets to perpetrator’s home:

Perhaps the most salient research finding to emerge from our study showed that targets located in close proximity to terrorists’ residences were more often successfully attacked. We posited that nearer targets situated in the same town, county, or region of the state as the terrorists’ dwelling were likely more familiar and easy to access, thus presenting greater opportunities for attackers to learn the specific attributes and vulnerabilities associated with each target. In some of our statistical models, we relatedly observed that targets with fewer security measures were also attacked more successfully than more protected targets.

Given these results, we can reasonably conclude that relatively “soft” or vulnerable targets that reside within terrorists’ “awareness spaces” are at a greater risk of being attacked by right-wing extremists, necessitating the importance of prioritizing target protection as a viable terrorism prevention tactic.

Successful attacks are more likely to involve lone actors, or lone wolves. The lone wolf terrorist strategy was invented so that attackers could avoid police scrutiny by minimizing direct contact with other known extremists. Alarmingly, it seems that in cases of far-right terrorism this tactic has generally worked to the terrorists’ advantage, and law enforcement will likely face significant challenges in thwarting this type of attack in the future.

We found preliminary support for the utilization of unsophisticated weaponry as a predictor of successful attack completion (only about half of our statistical models demonstrated this relationship). Guns, blunt objects, and arson attacks are generally uncomplicated and safe to operate, and thus are more likely to be delivered to the intended target and inflict damage. As such weaponry is easily obtainable in America, we can likely expect attacks of this nature to continue in the future. However, identifying unsophisticated weapon types as a risk factor of attack completion may help law enforcement sharpen investigative resources and prevent impending threats of violence.

While our study has laid a foundation for future scholarship on domestic terrorist attack success patterns, more work needs to be done. In particular, suspect characteristics such as prior criminal history, mental health, and sub-movement affiliations (e.g., militia, sovereign citizen, KKK) should be studied to identify additional risk factors of incident success. Future studies also need to replicate and verify our study’s findings using other sources of data and extending the scope of the analysis to Islamist terrorism.

Nonetheless, these findings can significantly enhance counter-terrorism investigative practices. Every year, police departments at all levels of government across the country are faced with a medley of thousands of suspicious activity reports and other sources of suspected terrorist activity. It is our ambition that by empirically identifying indicators of terrorist success risk, our research can help law enforcement focus scarce resources on the most plausible of threats and prevent future loss of life.

This article is based on the paper “Opportunity, Group Structure, Temporal Patterns, and Successful Outcomes of Far-Right Terrorism Incidents in the United States” in Crime & Delinquency.

Brent R. Klein – Michigan State University
Brent R. Klein is a doctoral student in the School of Criminal Justice at Michigan State University. His research interests include terrorism and extremist violence, bias-motivated violence, crime prevention, and communities and crime. Brent’s recent work has appeared in Justice Quarterly, Crime & Delinquency, Terrorism & Political Violence, The Sociological Quarterly, and Studies in Conflict & Terrorism. He holds a M.A. in sociology with an emphasis in criminology and a B.A. in sociology and criminal justice from the University of Arkansas-Fayetteville.

Jeff Gruenewald – Indiana University–Purdue University, Indianapolis
Jeff Gruenewald is an associate professor in the School of Public and Environmental Affairs at Indiana University–Purdue University, Indianapolis. He is also an investigator for the National Consortium for the Studies of Terrorism and Responses to Terrorism (START), a Department of Homeland Security Center of Excellence. He studies terrorism, homeland security, bias crime, homicide, and media coverage of crime and deviance. His recent work has appeared in Justice Quarterly, Journal of Quantitative Criminology, Terrorism & Political Violence, and Crime & Delinquency.

Brent L. Smith – University of Arkansas
Brent L. Smith is a distinguished professor in the Department of Sociology and Criminal Justice at the University of Arkansas. He also serves as director of the Terrorism Research Center in the University of Arkansas’s Fulbright College. His research has examined the temporal patterns of American Terrorists’ preparatory behaviors, prosecutorial strategies in terrorism trials, and government counterterrorism strategies. He is the author of Terrorism in America: Pipe Bombs and Pipe Dreams (1994) and additional publications in Criminology, Justice Quarterly, Criminology & Public Policy, and other scholarly outlets.