Despite having little in common with Donald Trump, white working class voters were instrumental in his electoral victory last year. Dale C. Tatum argues that to understand why, we need to look back to the 17th century rebellion of Nathaniel Bacon in Virginia. Like the colonial authorities in the wake of Bacon’s failed rebellion, Donald Trump was able to drive a wedge between working-class Black and White Americans by appealing to the Whiteness of the latter group while simultaneously advocating policies which were not in their interest.

Race was a dominant factor that helped to determine the outcome of the 2016 presidential election. Donald Trump made a clarion call that summoned White working class males to his cause.  Trump said that he was going to “make America great again.”  How?  He said that he was going to do this by deporting Mexican immigrants, banning Muslims from entering the country, and by stopping and frisking African Americans.  In other words, after an eight-year reign by a Black president, he was going to restore order by making America White again.  This message resonated with White males—especially White working class males and helped to turn some blue states red.

The irony of Trump’s victory is that he has little in common with most of his supporters.  He is a New York billionaire who lives in a Manhattan high rise penthouse.  Many of Trump’s supporters hail from the South, drive pick-up trucks, eat grits, and hunt squirrels during hunting season.  The only thing that these southern White men have in common with Trump is their whiteness.  So, why did so many vote for Trump?

According to the news media, White working class males voted for Trump because he claimed that he would create good-paying jobs for blue-collar workers.  If this were the case, he would have had the support of African American and Latino voters as well.  But, he received only 8 percent of the African American vote and 28 percent of the Latino vote. Instead, Trump’s electoral victory was based on the age-old strategy of driving a racial wedge between working class Americans, promising that that he would heighten the social status of Whites through the restoration of white privilege rather than improving their economic status. This strategy was first used in pre-Revolutionary America after Bacon’s Rebellion in 1676 to prevent the emergence of a multi-racial working class coalition, which would have fundamentally altered the political system.

Nathaniel Bacon and the Rebellion

Nathaniel Bacon was a young British aristocrat who settled in Virginia in 1664.  Frustrated at his exclusion from Governor William Berkeley’s inner circle, Bacon tapped into the discontentment of various groups in the Virginia colony.  Bacon’s coalition consisted of two disparate groups: aristocrats—like Bacon—who had been excluded from elite circles of social contacts which would have yielded them greater wealth, and a second group of farmers, former indentured servants, indentured servants, and enslaved African Americans who wanted to create a more egalitarian society.  The latter group complained that the colonial government failed to adequately provide for their well-being, that they were over-taxed, and that the government neglected to clear land for their usage and failed to protect them from attacks by Native Americans.  Many of the former indentured servants also complained that they had not received land that was promised to them at the end of their servitude. 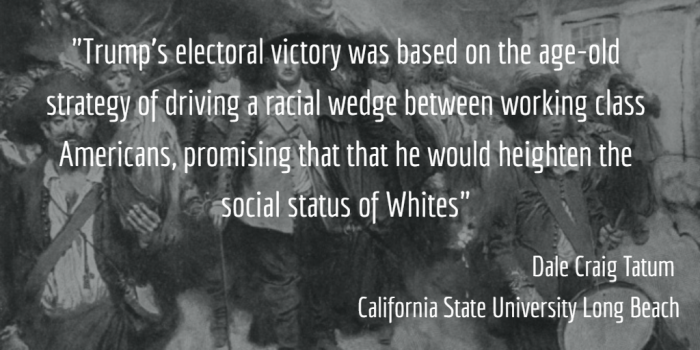 The Legacy of Nathaniel Bacon’s Rebellion

This challenge from the masses posed a threat to the ruling elite.  In the wake of Bacon’s Rebellion, the planter elite granted free land and the franchise to poor Whites and accelerated the codification of chattel slavery. By using race as a wedge between Black and White workers, the bonds of solidarity between the two groups were unalterably broken. By buying the support of working class Whites by offering them a few crumbs, they were able to make them believe that they were partners in the political system when they were not. This prevented a sense of class consciousness from spreading among the lower class and helped prevent biracial, class-based mass uprisings from taking place.

Trump: Cashing in on the Legacy of the Rebellion

Donald Trump is the political beneficiary of a similar sort of racial division to that which was deployed after Bacon’s Rebellion.  His campaign strategy was based on exploiting the fear and disillusionment of White working-class voters even though many of the positions he took during the campaign were at odds with their interests.

First, Trump’s stance on immigration shows how he appealed to “whiteness”: threats to deport undocumented Mexican immigrants and to build a wall on the US-Mexico border were blatant racist appeals, letting Whites know that he was willing to act to diminish the perceived threat that Mexican immigrants posed to the whiteness of the US. There is no such talk about building a wall with Canada, despite the fact that there are about 100,000 undocumented immigrants from Canada in the US and that it is used by many illegal immigrants from Europe to enter the country.

Second, Trump was also able to play on xenophobia – more than 70 percent of Americans believe that the US is losing its national identity due to immigration – to garner political support from White working class Americans who fear “the other” will take over and their traditional values will be lost. Since taking office his “Muslim ban” has aimed to placate his supporters’ xenophobia despite the fact that terror attacks on Americans by Muslims at both home and abroad are relatively rare. Yet, within 10 days of Trump’s election victory there were 867 terrorist attacks against racial minorities initiated by his supporters. The President was not disturbed by these attacks by his supporters nor did he threaten to respond in a forceful manner like he has threatened to respond against Muslim terrorists.

Given this weak response, it does not appear that terrorism is Trump’s main concern.  Rather, it appears to be what the presence of Muslims in the US seems to represent to Trump and his supporters: a threat to White Anglo-Saxon cultural hegemony.  Like many Mexican immigrants, many Muslim immigrants refuse to assimilate.  Therefore, they are viewed as a threat to the cultural integrity of the US.

Third, the position that Trump has taken on health care is also at odds with the interests of his White working-class supporters.  During the presidential campaign, he pledged to repeal Obamacare, the main beneficiaries of which were working class Whites. Finally, Trump’s education policies are not in the interests of much of his base; most send their children to public schools, but Trump and his Secretary of Education Betsy DeVos have advocated directing $20 billion in federal education spending to charter schools, private schools, and magnet schools. This policy which would likely lead to an overall decline in the quality of education across the country while providing a windfall for the wealthy who will have to pay less out of their pockets for their children’s private school education.

“The Blacks” and the Trump Administration

During his campaign for the presidency, Trump said that “the Blacks” would vote for him.  Well, they didn’t.  One of the reasons why he was not successful in obtaining the votes of African Americans is because of his support for “stop and frisk” policies, which he argued reduces crime in inner city areas. “Stop and frisk” was implemented simply to appease Whites by making them feel that they are being protected from a “Black boogie man”; ironically, most of the illegal drugs and weapons found on people subjected to “stop and frisk” are White.

Trump believes that he owes Blacks nothing.  Therefore, they can only expect the worst from him.  Trump’s weak commitment to the enforcement of civil rights is apparent by his appointment of Jeff Sessions as Attorney General.  The New York Times has reported that, “Mr. Sessions referred to the NAACP, the Southern Christian Leadership Conference and other civil rights groups as ‘un-American’ and ‘Communist-inspired.’” An African American federal prosecutor, Thomas H. Figures, said Mr. Sessions referred to him as “boy” and testified that Mr. Sessions said that he thought that the Ku Klux Klan was fine “until I found out they smoked pot”.

In early colonial America, a great deal of empathy and cooperation existed among Black and White members of the working class.  However, Bacon’s Rebellion opened an enduring racial divide in America that is still with us today.  African Americans were transformed into an under caste whose social status was so low that White workers were no longer able to relate to them on a personal or psychological level.  The resulting racial divide benefits the ruling elite who have utilized it to divide and conquer the working class.

Whiteness is the glue that unites Donald Trump and his White working-class supporters rather than his stance on the issues. In fact, his policies and positions are often at odds with their interests. To them, Trump is an authority figure who will restore the value of their whiteness

This article is based on the paper ‘Donald Trump and the Legacy of Bacon’s Rebellion’, in the Journal of Black Studies.