Now more than a century old, Black Greek Letter Organizations – fraternities – have more than 800,000 members. But are such organizations an asset or do they work against African American culture? Ali Chambers argues that rather than unifying the Black community against the effects of racial prejudice, they have merely become a vehicle for Blacks to assimilate into White culture and society, and a means to create a self-perpetuating Black oligarchy.

In the past 5 years, there has been a resurgence of research surrounding the philosophy and mission of the Black Greek Letter Organization (BGLO). While my work suggests that the rites of passage of the Black fraternity—which include ancestor veneration, rebirthing concepts, and dance performance—can mirror those characteristics found within traditional West African communities, new theories suggest that BGLOs should be critiqued as social movements

BGLOs are some of the most influential organizations in the country. Collectively, these organizations claim approximately 800,000 members, with many coming from the social elite of Black culture. Each year, they offer countless scholarships and conduct thousands of service programs. Accordingly, many of the staunchest supporters of BGLOs not only insist that their existence is a valuable asset to society but also stress that these organizations, which include writers, social activists, educators, and civil rights leaders, are historically linked to the success of the African American community.

Conversely, many of their harshest critics maintain that the activities of organizations that have included secret meetings, selective membership, and a preference for lighter complexions have allowed Black elites to create a separate privileged society based on snobbery and arrogance and have thus enabled these organizations to perpetuate the vicious cycle of racial prejudice and White supremacy.

Historian and sociologist W.E.B. DuBois at times openly condemned Black fraternities. During a 1930 commencement address at Howard University, DuBois stated, “Our college man today is, on the average a man untouched by real culture. He deliberately surrenders to selfish and even silly ideals, swarming into semiprofessional athletics and Greek letter societies…we have in our colleges a growing mass of stupidity and indifference”.

Consequently, it is the conformity to Western values and social norms that has created the controversy surrounding the initial purpose of the BGLO. Between 1906 and 1920, eight of the most prominent BGLOs were established. Many scholars have questioned whether these organizations were created in the hopes of unifying the Black community against the harmful effects of racial prejudice or whether they were formed by young African American students in order to gain acceptance into American society by emulating existing White organizations of the period.

From as early as the 1700s, Blacks in America have believed that there were conditions placed on them to justify equality or citizenship. These included acceptance of Christianity, participation in the military, obedience to Republican or Democratic principles, and economic development. Taken together, these can be encapsulated as the “be like us” theory of equality—that Blacks would be equal to Whites when they become like Whites. Another approach was an attempt to adjust all thought and action to the will of the greater group—assimilation into White culture and society. A third path was a conscious effort at self-realization and agency. 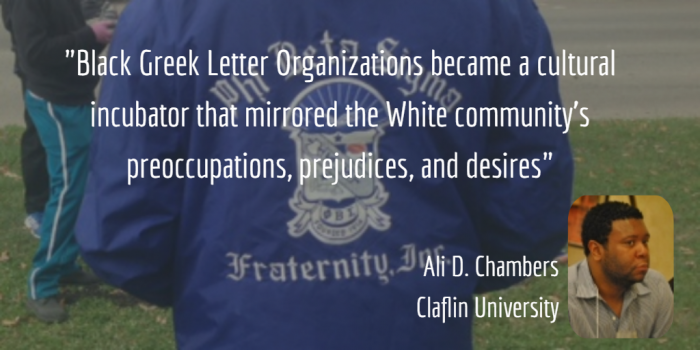 Although the BGLO had the specific aim of liberating the Black community from inferior positions as second-class citizens, many viewed these organizations as a means for the Black bourgeoisie to create and maintain privileged status and recognition within the Black community. Nevertheless despite their use of elitism and snobbery, the popularity of the Black fraternity was furthered by both the exclusivity of these organizations and the notion that they helped to produce a better class of Black people.

Rather than adhering to their own traditions and cultural attitudes, many members of BGLOs abandoned traditional African views and adopted the views of the dominant Anglo culture. While it is true that BGLOs were social organizations that utilized some elements of traditional African culture and combined them with elements of European culture, these organizations, in the end, used their power and influence to create a self-perpetuating Black oligarchy.

Although the BGLO has served as a safe haven for Black thought and allowed for new attitudes regarding the future of the Black community, these organizations were conceived within Western culture, which over time reflected the views of a racist society and thus became a hindrance to the furtherance of the Black community. In this respect, the BGLO became a cultural incubator that mirrored the White community’s preoccupations, prejudices, and desires. As a result, the BGLO became an oppressive organization that was at times used to suppress African characteristics and uphold the ideals of White supremacy.

This article is based on the paper ‘The Failure of the Black Greek-Letter Organization’, in the Journal of Black Studies.