Trump supporters’ resistance to social justice efforts is driven by their meritocratic ideology, not bias.

Trump supporters’ resistance to social justice efforts is driven by their meritocratic ideology, not bias.

Social justice concerns have shot to the top of public attention in the current political atmosphere. Conservatives in general, and Trump supporters in particular, seem opposed to social action that advances equality for disadvantaged groups.  From the travel ban, to the proposed health care bill, to the cancellation of antidiscrimination compliance programs, the social justice and equal rights advancements of the last decades appear to be stalling, if not reversing.

But is this accurate?

In a recent survey of 1,150 Americans, I analysed the difference between Trump supporters’ and non-supporters’ understanding of US society. The survey launched three weeks after the 2016 elections and the sample is proportionally representative of US adults.

(1) Trump supporters are indeed more opposed to social justice efforts than other Americans. They are more likely to believe, for example, that too much money is spent on homeless shelters and that women, racial or ethnic minorities, and the poor are too demanding in their push for equality.

(2) Trump supporters express more overt bias against blacks, Hispanics, women and the poor. For example, they often see blacks and Hispanics as less intelligent and hardworking than whites.

(3) Trump supporters are more likely to believe in the “meritocratic ideology,” a popular belief that frames American society as generally fair and explains lack of success in life as the result of individual deficiencies in effort and talent.

Believers of this meritocratic ideology are more likely to think that “U.S. society is equitable and fair,” that “society has reached a point where racial minorities and whites have equal opportunities for achievement” and that “individuals are personally responsible for their position in society.”

So, are Trump supporters more opposed to social justice efforts because of greater overt bias, or is the meritocratic ideology in play as well? 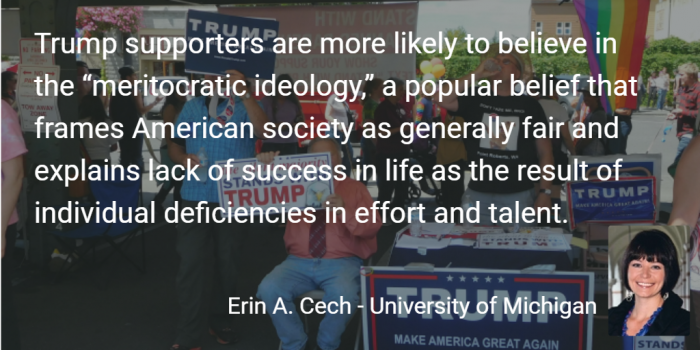 What to do about rugged meritocratists? Implications for activism

So what are equality advocates to do? Trump supporters do tend to express more overt bias than non-supporters.  It’s easy to focus on this, given the rise in hate speech, vandalism, and violence after the 2016 presidential election.

But advocates should not assume that such bias is the only—or the greatest—barricade to social justice efforts. The meritocratic ideology is a bigger source of resistance.

Convincing rugged meritocratists that structural inequalities exist is no simple task. A century of social science research demonstrates the endurance of inequality in the U.S., but formalized academic research isn’t often the most effective way to challenge deeply held beliefs. Emotionally compelling anecdotes that illustrate broader patterns of inequality may be more successful at reshaping people’s perceptions of U.S. society than aggregated trends or statistics. Pointing out the ways that the American Dream is not necessarily available to their neighbours and friends can help people change their views of social justice efforts—seeing them not as fights for “special rights” but for equal rights.

Resistance to social justice efforts are driven less by overt social bias than by a particular framing of the social world—one that denies structural inequality and blames victims of that inequality for their own circumstances. Rugged meritocratists—whatever their political affiliation—put up substantial resistance to social justice efforts because such efforts don’t mesh with their understanding of American society. Inequality activists and scholars must keep this in mind, or rugged meritocratists will remain unconvinced by demands for social justice.

This article is based on the paper ‘Rugged Meritocratists: The Role of Overt Bias and the Meritocratic Ideology in Trump Supporters’ Opposition to Social Justice Efforts’ in Socius: Sociological Research for a Dynamic World.

Even Donald Trump represented at Bellingham Pride Festival by Robert Ashworth is licensed under CC BY 2.0