In July, President Donald Trump announced via Twitter that transgendered individuals would no longer be allowed to serve in the US military. Thomas Crosbie writes that there is no justifiable reason to exclude the transgendered from the military and such an order ignores its tradition of progressive politics. He argues that in matters such as this, the military should not remain silent when its expertise is being distorted and misrepresented.

Perhaps the most valuable lesson of President Trump’s threatened transgender ban is a lesson in why the American military, despite its long-standing claims to the contrary, is and should remain actively involved in American politics.

Military officers are taught that they are apolitical professionals. The myth, traced back to Samuel Huntington’s 1957 study of the military, is parroted by legions of commenters who fret about the military getting involved in political matters. This is dangerous for two reasons. First, it deceives the American public as to the degree to which the military is enmeshed in the political system, including its dogged pursuit of appropriations and costly weapons systems. Second, it discourages military leaders from getting involved in political matters when it is in the public interest for them to do so.

In what sense are military leaders acting “politically” in relation to the transgender ban? In the first instance, they were unwitting tools used by the president to achieve his policy end. On July 26, President Trump tweeted the following: “After consultation with my Generals and military experts, please be advised that the United States Government will not accept or allow transgender individuals to serve in any capacity in the U.S. Military”.

After consultation with my Generals and military experts, please be advised that the United States Government will not accept or allow……

In invoking unnamed “Generals and military experts”, the president based the legitimacy of the policy on the expertise of his military advisors. More truthfully, the president’s tweets were a form of “stolen valor”, a misuse of the public’s confidence in the military intended to fool the public into supporting the president’s policies.

And let’s be clear. The fact of the matter is that there is no militarily-justifiable reason to exclude transgender people from serving their country. This was made obvious only a few months ago when the ban on transgender servicemembers was lifted. No compelling evidence was presented then or subsequently to justify the ban.

More explicitly, it is wrong to assume that transgender service is somehow incompatible with the American armed services. We know that the militaries of other English-speaking countries, including Australia, Canada, New Zealand, the Republic of Ireland and the United Kingdom, have all already created provisions to protect transgender service members who wish to serve openly, and in several of those countries there have been high-profile success stories, ranging from a transgender Group Captain in Australia to a transgender pilot working alongside Prince William in the United Kingdom. These similar countries and military cultures easily overcame the perceived hurdles of allowing open transgender service. 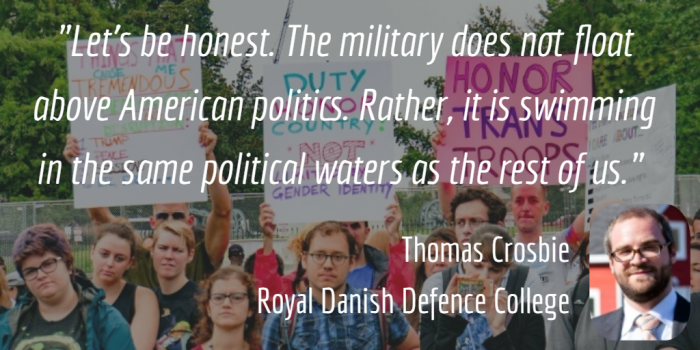 Some may object that the American military is more conservative, and therefore less capable of accepting this latest wave of inclusion. This overlooks the deep tradition of progressive politics within the institution and the rapid pace at which it has accepted federally-mandated inclusion policies to date. The pragmatism of military professionals has thus far overcome divisions of race, sex and sexuality, and will just as surely overcome politicized gender barriers.

In a recent National Transgender Discrimination Survey, 1261 people reported they were either veterans or were currently serving in the US armed services. Consider the variety of options they selected when asked to choose their gender identity. 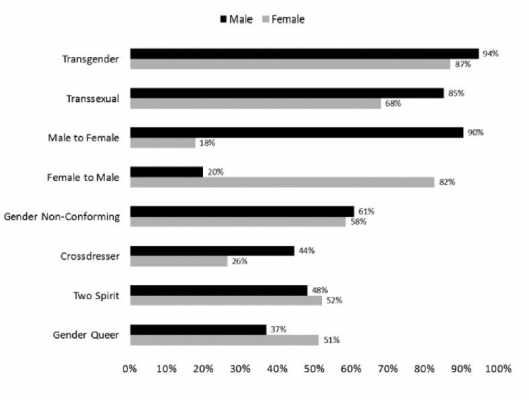 That a segment of the population both inside and outside the military live with nontraditional gender identities is simply a fact, the lived reality of thousands of current and former military personnel who have already served honorably. They identify with concepts from transgender, transsexual, gender-nonconforming, Two Spirit and beyond, but also as Soldier, Sailor, Airmen and Marine. Many have risked their lives and some have sacrificed their lives. What will their leaders risk to support their right to serve openly?

This brings us back to Huntington and the myth of a military “above politics”. The president’s appeal to the military’s reputation pulled it into the political quagmire.

The question is what should military leaders do once politicians have inserted them into politics? For many who serve in uniform, the answer will seem obvious. Do nothing. Follow orders. Don’t get involved. This is misguided. It is an inaccurate understanding of the responsibilities of military professionals, as the research makes clear. And it is dangerous to the Republic.

In a survey conducted by the Triangle Institute for Security Studies in 1998-99, military officers were asked their opinions on whether military leaders should be neutral or should advise, advocate or insist on a range of policy issues in their exchanges with the president. The findings revealed that the Huntington myth of an apolitical military was endorsed by only a fraction of the officer corps, with large proportions of military officers endorsing an active role for military leaders in a number of politically-charged scenarios. This research was replicated by Col. Heidi Urben in 2009, with similar findings.

This year, my colleagues and I have conducted a survey of journalists and academics who are experts on US military affairs. Once again, we find agreement among many experts that the military should abandon either a neutral or advisory position and adopt active roles in advocating or insisting on their expert positions in their relations with the president.

Let’s be honest. The military does not float above American politics. Rather, it is swimming in the same political waters as the rest of us. The social science has proven for decades that the military does and should act as a non-partisan political pressure group, advocating for its interests openly but within a rigid legal horizon reinforced by deeply felt professional ethics.

Few taboos in American politics are more powerful than the involvement of the military in politics. Nor should we not ignore the dangers. However, our more pressing danger is for the military, long schooled in remaining above politics, to passively allow its expertise to be distorted and misrepresented, not simply in personnel matters but also in matters of setting rules of engagement, developing exit strategies and maintaining alliances.

Donald Trump is willing to use the military’s symbolic power to his own personal political advantage. The military must be empowered to stop him.

This article is based on the paper, ‘Barriers to serve: Social policy and the transgendered military’, in the Journal of Sociology.