How poor public transit makes idiots of us all

How poor public transit makes idiots of us all

America’s mass transit systems are in a sorry state, and only a tiny minority of Americans makes use of them. For Kafui Attoh America’s transit is “idiotic” in two ways: in the sense that it is stupid to have not invested more in it, and in the way it isolates those unable to use cars, excluding them from urban public life.

The bourgeoisie has subjected the country to the rule of the towns. It has created enormous cities, has greatly increased the urban population as compared with the rural, and has thus rescued a considerable part of the population from the idiocy of rural life. – Karl Marx and Friedrich Engels, 1848

There is perhaps nothing more idiotic than a city with poor public transit. The typical North American city may, in this sense, be the paragon of idiocy. As many have long noted, the US remains rather unique amongst developed nations in the reluctance of its citizens to board anything resembling – gasp!—a public bus.  In 2012, only 7 percent of all US residents used public transit on a daily basis. A whopping 51 percent reported never using public transit at all.  For many, of course, the reasons are clear enough. Beyond the “absurd primacy of the automobile in American life,” public transit in the US suffers the same underfunded fate as so much else that is “public” in this country. To quote John Kenneth Galbraith we remain a society that is “privately rich and publicly poor” and nowhere is this more evident than in the sorry state of urban mass transit.

Only this past summer, malfunctions with New York City’s century old signaling system drew national headlines after millions of subways riders complained of excessive delays, overcrowding, and of being stranded at their respective stops. In the previous summer a spate of track fires in Washington DC’s metro not only led to service delays, and the launch of the semi-ironic website “ismetroonfire.com” but several hospitalizations from smoke inhalation. Where this is the reality in two of our most transit-dependent cities, it is undoubtedly worse in smaller cities where transit often remains the domicile of the poor and where suburban sprawl makes commuting via bus slow and inconvenient.

Given all this, we might understand the idiocy of our cities in at least two ways. The first way and the most conventional is to see our hesitancy to invest more in urban public transit as simply stupid. Where public transit remains a proverbial “low hanging fruit” in the fight against congestion and climate change, efforts to secure a more sustainable and livable planet require that we do whatever it takes to get more people on public buses and public trains — whether that requires investing more in transit or redesigning cities themselves. Doing otherwise is simply idiotic.

Of course, there is yet another way to understand the idiocy of our transit impoverished cities. And here, we might start in a rather unconventional place — namely, with a few lines from the Communist Manifesto.  Just under 170 years ago, Karl Marx and Friedrich Engels predicted the collapse of industrial capitalism at the hands of a global proletariat. In laying out their argument, Marx and Engels make a brief but rather notable reference to cities. As they observed, to the extent that industrial capitalism was giving rise to ever more “enormous cities”, such cities, they argued, were inevitably poised to “rescue a considerable part of the population from the idiocy of rural life.” As many have since noted, what Marx and Engels meant by this was not that rural life was stupid or dumb but rather that rural life was inherently isolating and apolitical. 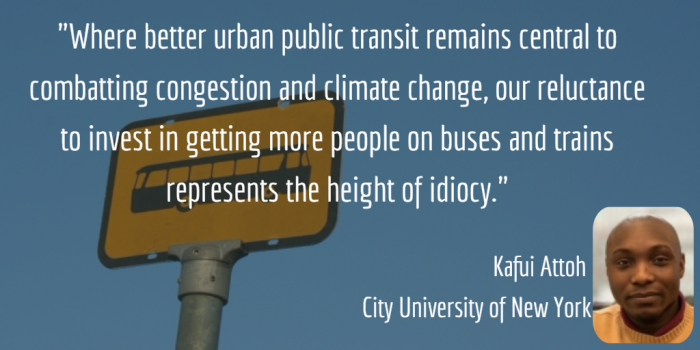 “Waiting for the bus” by Michael Labrecque-Jessen is licensed under CC BY SA 2.0

Drawing on the Greek root of the word, Marx and Engels were using idiocy in its classic sense, as a synonymy for “privatized isolation.”  In the Greek city state to be an idiotes was to be “private person withdrawn from public concerns.” It was not only to be isolated from the wider community and the democratic process but from public life itself. As Marx and Engels argued, in contrast to the “privatized isolation” of rural life, the industrial city promised just the opposite — it promised “revolutionary combination.” Not only did cities allow workers to see — for the first time — their shared immiseration, but cities afforded these same workers the opportunity to come together as a “class for itself.”  While many have interpreted Marx and Engels in much the same way, fewer have made the subsequent leap to what seems the contemporary reality. For any number of people living in today’s cities, urban life is unquestionably idiotic and this is especially the case for those who must rely on public transit.  For the transit dependent, in today’s cities not only is “revolutionary combination” off the table, but simply getting across town can be a monumental chore. Contra Marx and Engels’ account of rural life, when transit service is cut, when wheelchair lifts malfunction, or when buses break down, that transit dependent are faced with the idiocy of urban life if anything at all. For such riders, public transit means the difference between a life condemned to one’s own home and one lived out in the open. Of course, the poverty of transit in our cities not only effects the transit dependent. Where poor public transit prohibits the poor, elderly or disabled from fully engaging in the public life of the city, the corollary is also true. Namely, those with means further withdraw into their private automobiles and further isolate themselves from the public at large. The self -imposed isolation of this latter group is different but no less worrisome and no less idiotic. Suffice it to say, not only does poor public transit give lie to the radical promise of cities a la Marx or Engels, it gives lie to the far more modest promise of a public life worthy of our democracy.

To say that there is nothing more idiotic than a city with poor public transit is, as noted above, to speak of idiocy in at least two ways. Where better urban public transit remains central to combatting congestion and climate change, our reluctance to invest in getting more people on buses and trains represents the height of idiocy.  Such reluctance is also idiotic in a second sense. Namely it is idiotic in that reproduces cities where the transit dependent and others are too often excluded from public life itself. Of course, for any number of those engaged in fights to improve urban transit, these two forms of idiocy are not unrelated.  Indeed, even for those outside such fights the connection between the idiocy of the first kind and the idiocy of the second is increasingly hard to ignore. A recent case is illustrative. Earlier this year, Kelley Kennedy of the Associated Press observed that in the “scramble to flee Hurricane Irma” Floridians reliant on public transit fared far worse than their car-owning neighbors. Where the latter were able to escape the storms path, the former found themselves stranded in place. The symbolism here could not be more glaring. In Florida as elsewhere, the very people we ought to champion for reducing global carbon emissions by using public transit were the same people left to withstand a storm with all the fingerprints of a climate change induced disaster. Idiocy meets idiocy, and the beat goes on…

Kafui Attoh – City University of New York
Kafui Attoh is an Assistant Professor of Urban Studies at the City University of New York’s Joseph S. Murphy Institute for Worker Education and Labor Studies. His broad interests are in the political economy of cities, urban mass transit, and “rights-based” social struggles. His work has appeared in Progress in Human Geography, New Labor Forum, The Journal of Cultural Geography, The Geographical Bulletin, Alternate Routes: A Journal of Critical Social Research, ACME: An International E-Journal for Critical Geographies, Urban Studies, Antipode and Space and Polity.