Political parties are made up of coalitions – and those within these coalitions don’t always agree with one another. In new research, Geoffrey Sheagley looks at how voters make sense of debates within parties where their own views are challenged. He finds that when a party has the same view as one of its members, they become more supportive, but the same does not occur when they disagree. In light of these findings, he writes that we may see more issues where the positions of those who identify with a party do not align with those in charge.

American politics is increasingly defined by polarized political elites and voters who are sorted into political parties based on shared policy and ideological positions. The result is that debates about political issues often occur along party lines. However, even in a time of significant polarization, some issues still create disagreement even within political parties and party coalitions. For example, President Obama opposed the Keystone Pipeline while a block of Democratic legislators broke with their party and voted with Republicans in Congress to support the bill. A sizeable number of democratic voters were also out of step with the leader of their party, with one poll finding that self-identified Democrats were roughly equally split in their support vs. opposition for the project.

Previous research tells us that voters often rely on party cues when taking policy positions, but what happens when those cues conflict with existing opinions? In other words, how do voters make sense of debates that cut across their partisan identities and policy views? On the one hand, partisans may ignore the discordant information and follow their party’s position. On the other hand, cross-cutting debates may signal that the party is out of step with voters’ opinions, which could, in turn, reduce the effect of partisan information on their judgments.

In new research, I address this question by examining how people react to political information that explicitly highlights a disconnect between their policy views and the positions held by elites in their political party. To understand the effect of cross-cutting information, I designed an experiment that embedded participants in a debate about immigration reform and a fictional ballot initiative aimed at curtailing undocumented immigration. Participants in the study were exposed to one of three debates; one which did not include partisan information, another where other members of their party adopted positions that aligned with their attitudes toward immigration while opposition-party elites adopted opposing positions (party consistent), and one where other party members adopted positions which disagreed with those of participants (party inconsistent).

The first area I examined was how these debates shaped respondents’ evaluations of the political parties, specifically whether a respondent’s level of partisan ambivalence changed depending on the type of debate they encountered. Figure 1 shows that when respondents were exposed to the debate when their party’s members disagreed and opposition agreed with them, they were more likely to feel ambivalence (white bar) towards their party. Conversely, when a respondent was exposed to a debate in which party elites adopted the same positions as the respondent, she was more likely to become less ambivalent (gray bar) toward the parties. 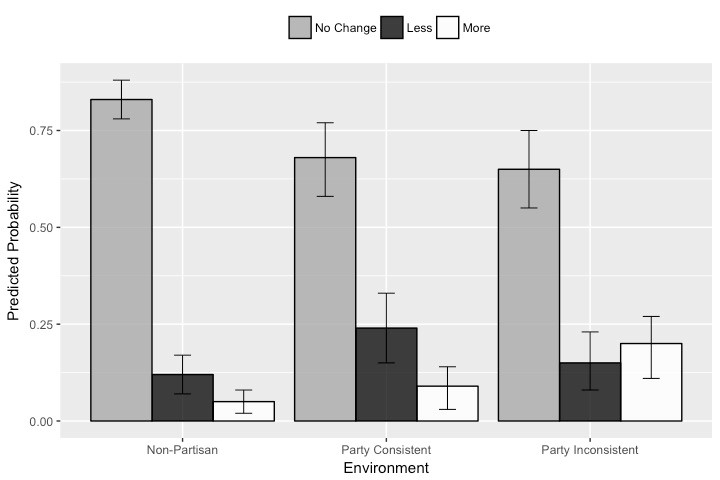 Figure displays the predicted probability of each category of partisan ambivalence by information environment. The lines in each bar correspond to 95 percent confidence intervals.

So, for example, a democratic voter with views supportive of the ballot initiative and who was assigned to a condition in which democratic elites opposed the initiative was more likely to feel heightened partisan ambivalence. Thus, the party inconsistent condition led respondents to adjust their evaluations of the political parties based on the clashing information rather than to uncritically accept the parties’ positions.

“Graphic Conversation” by Marc Wathieu is licensed under CC BY NC 2.0

A second area I studied was if the different types of political debates also shaped how people made a decision about their support for the ballot initiative. I accomplished this by analyzing if the degree to which participants relied on their prior attitudes about the initiative and their partisan identifications when casting a vote for the initiative varied depending on the type debate they encountered.

Figure 2 – Change in Predicted Probability of Voting ‘Yes’ by Information Environment, Party ID, and Prior Attitudes 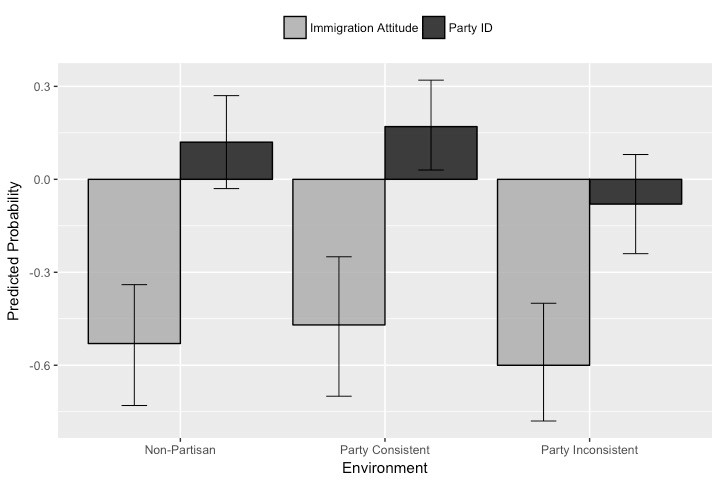 Figure displays the change in the predicted probability of voting “Yes” on the ballot initiative by changes in party identification and immigration attitudes. The lines in each bar correspond to 95 percent confidence intervals.

What does vary depending on the type of debate a participant encountered is the impact of a participant’s party identification. The dark gray bars represent the change in ballot support for democratic identifiers vs. republican identifiers. Republicans are more supportive of the initiative in the non-partisan and party consistent environments. However, the effect of party is statistically weaker in party inconsistent environment compared to either of the other two environments.

My results indicate that a political party has less influence when a participant was exposed to a debate that highlighted a disconnect between her party identification and policy attitudes. At the same time, prior attitudes toward immigration reform remained a consistently strong predictor of ballot support. This suggests that participants were not simply less certain about their evaluations, but rather that they relied less on their party’s position when forming an evaluation of the initiative.

Elite polarization defines many current debates in American politics. Despite this, there remain issues that do not neatly fit into one partisan camp or another. For example, debates about free trade cut across traditional lines in both parties. More generally, to the degree that political elites take more extreme positions than members of the mass public, we may see a rise in the number of issues where the positions of those who identify with a party in public do not align with those of party elites.

While voters are motivated to rely on partisanship and to accept information from party elites, I show that at least some voters appear to maintain a critical eye when exposed to cross-cutting debates. Given that elite polarization shows no signs of abating, my work should generate some optimism that voters will not unquestionably internalize these changes.